Happy November 6th, 2012! It is Election Day in America, so I went the obvious route and picked The Campaign to review. I don’t even have a clever intro to say before I talk about the movie, so fuck it, lets just go into it.

In the 14th District of North Carolina, life is simple. Cam Brady (Will Ferrell) is running for his fifth term as congressman for the Democratic party and is unopposed. I guess people really like him. Sure he is a filthy man, and doesn’t do much, but who cares. Unfortunately, his popularity takes a drastic turn down when he leaves a very explicit sexual message for a woman he is cheating on his wife (Katherine LaNasa) with. His campaign manager (Jason Sudeikis) tries to put a positive spin on it all, but nothing really seems to work.

This spells for trouble in Capitol Hill, namely with the Motch brothers (John Lithgow, Dan Aykroyd) who are working on a new plan with China and need all the support they can get. Seems like now is the best time to replace Brady with someone new, that the public will love. Unfortunately their only available contact in the area is Marty Huggins (Zach Galifiankis), the son no one talks about. Wanting to make his dad proud, he is happy to run and make his area of North Carolina better.

He just didn’t know it involved changing everything about himself, his wife (Sarah Baker) and kids, from the mysterious campaign manager Tim Wattley (Dylan McDermott).

But more importantly, once both men are in the race, how low will they go to discredit the other, just for a chance to help start Project: Insourcing? 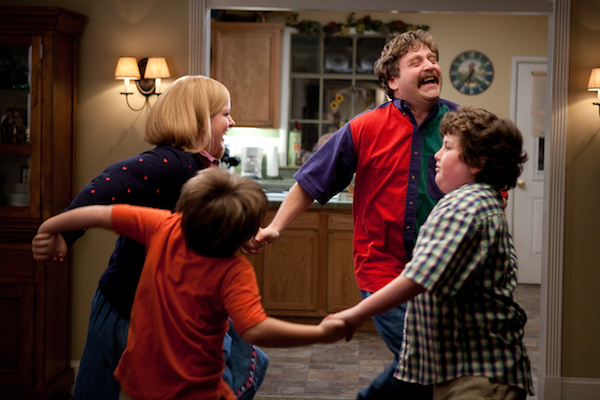 Will they be able to stop all this family shit and man up?

Having lived in North Carolina, I was happy to notice a lot more subtle jokes than one would have expected. Like the 14th District of North Carolina, that doesn’t even exist! NC had 13 districts, not sure if they did that for legal reasons, or for the joke, but I will so go for the joke.

Cutting right to the chase, this movie did make me laugh. I giggled quite often. But I think the movie went the easy route with most of the jokes, and could have made a stronger movie overall, tackling bigger issues, while also keeping a lot of the jokes. The DVD for this movie came out about a week ago, all of the timing makes since. They wanted this movie because of the presidential election. Yet they didn’t really say anything important about it.

Sure, the basic message of money buying elections is probably true. Minor jokes on the Romney/Obama campaigns, and other parallels like John Edwards. But overall it just seemed to be missing a lot more.

I would suggest seeing the movie once, it will probably make you laugh. I just don’t think it will pack as big of a punch in multiple viewings.