For those avid readers of Gorgon Reviews, you might think this documentary sounds familiar. Well, first of all, thank you to the three of you. Second of all, you are thinking about Schooled: The Price of College Sports, which was about the exploitation of college athletes for profit.

This is The Business of Amateurs, which is about the exploitation of college athletes for profit and other reasons!

Now obviously this is a subject I am already immensely passionate about it. I have gotten into arguments about it in real life. I have even read a book on the subject, which is a big commitment for me. There is no good reason for people to be brought to colleges, controlled 100% of their time, make the college millions, while not earning a livable wage, getting educated, or being able to have other jobs or use their success for their gain.

And yeah, The Business of Amateurs is another documentary about the subject. But like I said, it is different. It is more than just the moral reasons why people shouldn’t be exploited that way. They go into some science. And the documentary is written, directed, and narrated by Bob DeMars, a former college football player, so it is also a bit more personal. 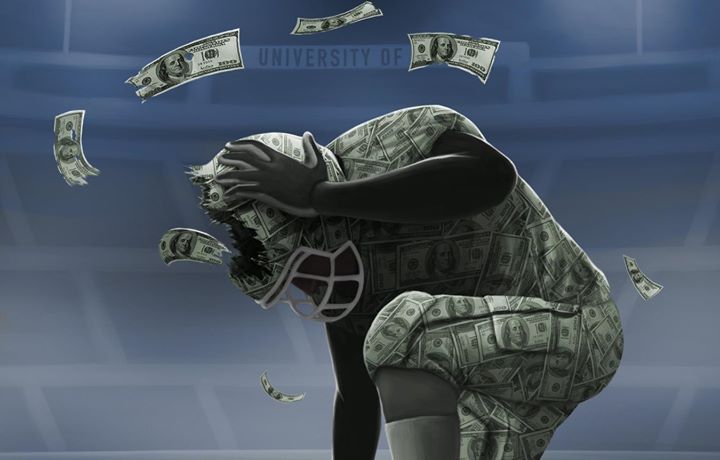 Looking closely at the cover, I found myself a little bit moved.

Remember the movie Concussion? The film that was supposed to shake the NFL and bring the truth, but was extremely watered down, if not well acted? Well, this documentary goes a lot into health as well.

We have players who are not making money, who have to practice daily for hours, play in games, hitting their head over and over again. The majority of them are not going to the NFL, will not be making big bucks, and they are potentially setting themselves up for brain damage, depression, and a young death.

Couple that with scholarships that can be taken away if you are injured, and you got a system that cares not at all for the athletes that show up. They drop you as soon as you are hurt, and won’t help you when you have bigger problems in the future for work you did for them.

But I don’t want to get too specific into all of the details.

This documentary has a lot of interesting information and I don’t want to go over all of it. I clearly loved it, but it had some minor issues. It is very clearly an amateur film (about amateurs!), some scenes aren’t well polished, some just scream out indie. This is only important in that other scenes are very well, so the disconnect is felt as it goes back and forth.

Additionally, the documentary doesn’t talk about sports outside of Football and Basketball, the big money earners. We get to hear about how some real life athletes outside of the top two are affected after their education, but they don’t go into how those programs are funded and how they could survive if the players earned some damn income relative to the income they bring in. It was more noticeable thanks to going to the NCAA museum where they showed many sports, but again, didn’t really talk about them.

Either way, this is another documentary, and many more people, explaining why the current system is fucked up, and maybe, eventually, more people will realize it.

3 out of 4.
Tags:3 out of 4, Documentary, Sports, The Business of Amateurs