MAYBE. Just maybe! A gun that can create universes when it shoots. That’d be wicked, if not super sci-fi. 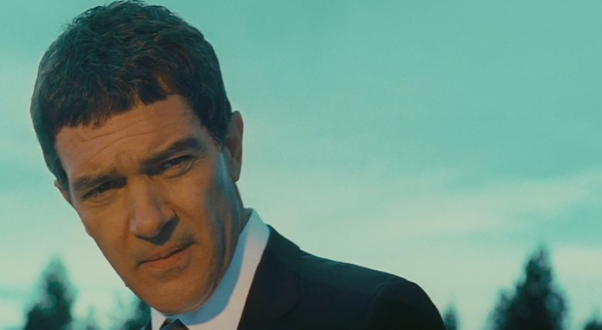 But Antonio Banderas is normally more subtle than a universe creating gun.

So AB is an LA PI. He is hired to find a missing stripper girlfriend (Sienna Guillory) of a russian boxer (Robert Maillet). She is missing, obviously. But she also has about 30 million dollars in diamonds. But this turns into a zany adventure that might involve the destruction of the world!

And the plot is hard to describe. Lets just say it involves people actually trying to recreate the big bang under New Mexico (inspired by a True story?), and the Feds trying to find out where and stop them, you know. But first AB has to explain is story to the cops! Sam Elliot plays the madman, with Jimmi Simpson as his Physicist. We also have William Fichtner playing an FBI guy, and the Dawson playing another guy.

Oh yeah, and Autumn Reeser plays a waitress in a small town, who gets turned on by particle physics, and is part of probably one of the hotter sex scenes in a movie that came out in 2011, probably. Just so you know. And it is super, super nerdtastic.

Maybe the only reason to watch the movie. Maybe not.

I am torn on my opinions on this movie, which is why I am giving it the 2 out of 4. It reminded me of The Spirit, in terms of CGI cheesyness, mostly involving backgrounds and stuff. Seemed like they were just having fun with it all. But also the first bits were more confusing and made me un interested. But the plot, it was actually pretty smart, in its terminology, and in what ended up happening. It involves a lot of physics, obviously. But also it was super weird? I think it might need to watch it again to understand it all.

I don’t even know how understandable that last paragraph is! This movie is either incredibly great, or incredible stupid, and I just do not know. Try it out? Let me know.