I can’t say I really heard much about The American Mall movie before. But from the looks of the cover, it was probably geared towards families, or something. Maybe some music involved.

I did not know it was an “MTV” movie, which has actually made a lot of decent films like Joe’s Apartment and Varsity Blues. But I think those films were more focused on appealing to large audiences, and also on the actual plot. They also weren’t made for TV movies, which although isn’t necessarily a death sentence for a movie, it does make its ability to succeed pretty damn hard.

But hey, its producers also did the High School Musical Trilogy, and 2/3 of them were tv movies! 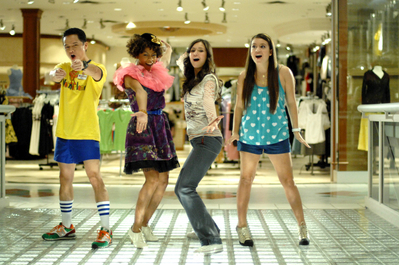 Singing about commerce. They have no respect for people with no shopping agenda.

All of the events in this movie take place in the mall. Deal with it!

If there is one main character, it is Ally (Nina Dobrev), poor poor Ally. She sometimes wears shirts that say “Be The Change” on them, referring to an incorrect Gandhi quote, so you know she isn’t the smartest tool in the shed. But you know, big heart, big dreams. She wants to be a star some day, and even writes her own music. That is good that she likes music, since she works in the music store in the mall, run by her mom, Erin (Yassmin Alers), who released an album of her own! Like, 20 years ago, and it didn’t do good. But still, technically a former professional singer/songwriter.

Joey (Rob Mayes) also works at the mall, but as a janitor. He actually has a band, well, a make believe band. Complete with make believe fans. Along with three other young white male janitors, they pretend to be in a band and sing and dance, I guess during their breaks (I HOPE). Just you know, poor, no instruments and stuff.

Max (Al Sapienza) is super rich, owns lots of malls, but this one was his first. He has left his daughter in charge of it (I guess?), Madison (Autumn Reeser) and she might be a bit mean. She wants to open up her own store for the best designed clothes ever. OF ALL TIME. EXPENSIVE. But her dad she needs a way to set it apart. Apparently she gets the idea to do a fashion show to set it apart. Because clothing stores just don’t do that. But also a live performance.

Hey look, Joey and Ally are hitting it off. He even helped her finish the song she was working on and it is awesome. Madison hears Joey performing, wants him to do it (with her though) for the concert. It isn’t stealing, it is partially his. She will get some songwriting credit. And Madison will give Joey everything he wants, style, clothes, instruments for his band, and fame.

But can he pull the trigger and steal the song Ally wrote, who also wants to be a star, when he also has the hots for her? WHAT ABOUT THE FASHION SHOW? MAYBE SOME WOMEN IN DRESSES? 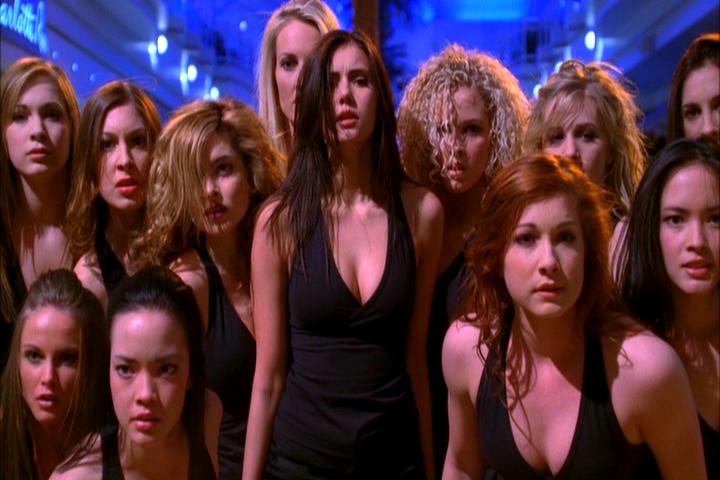 What’s that? You want a picture of a lot of women in identical black dresses in a mall? That is oddly specific, but here you go!

Ugh. So for whatever reason, I was actually excited to watch this movie. I mean, I like musicals, I like spending money. Fuck yes. But to me this movie was completely uninteresting. The songs were pretty much blah, and weren’t too good sound wise.

I think I enjoyed one and a half songs. Yes, that is it. But not even to large degrees. People felt super cliched, Madison character was just a mean stereotype (who only kind of turned it around, after shit was in her face. Not literal). Which is weird, because Autumn Reeser is the only “famous” person who was in this movie, just probably not at the time.

I think this movie cost me $1 to buy, and that may have been too much.