Good news everybody! Another 50 reviews down on my website, another Milestone Review ready to announce.

Some people tell me, “Hey, Gorgon Reviews, why do you do a longer ridiculous review to celebrate every 50 reviews? No one gives a shit about 1450 or 1100.” Well, first, that is harsh. And 50 reviews, at 5 a week, means I just did 10 weeks of hard work and I’d like to do something fun.

Sure, once I get to 1500, I could start doing them less often. But there are so many supposedly bad movies from the early 2000’s that I haven’t gotten to watch, and they deserve my attention and love! Which is why I will treasure review 1450 (that is today), just as much as review 1500 (in about ten weeks).

Today I am looking at The Adventures of Sharkboy and Lavagirl, a film I knew was ridiculous when I was a kid. Spy Kids was one thing, this one was just sillypants sillypants. But I realized that there is a connection between this film and some of my other Milestone Reviews, and connections are fantastic. That’s right, a member of Twilight is involved in these films, which is all the more reason to watch this movie. 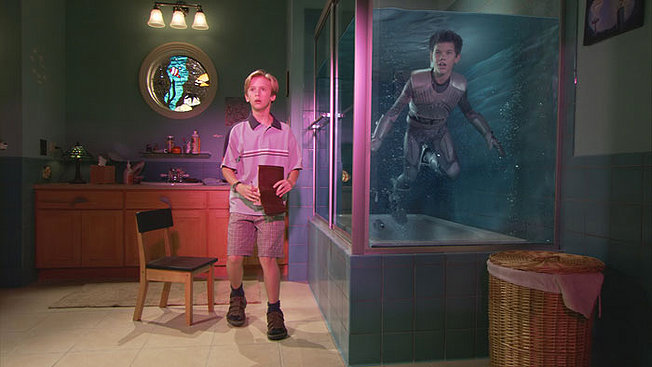 And I will dissect it like the strangest most unethical science experiment.

Max (Cayden Boyd) is our hero, and he is neither shark nor made of lava. No, he is just a boy in middle school or something. He keeps a dream journal. And sometime early into the school year, let’s say first week, he tells his totally true story about summer vacation.

You know, how he met Sharkboy (Taylor Lautner). A boy who was raised by sharks since he was like six, letting him gain gills, fins, claws, crazy teeth and everything. Self proclaimed King of the Ocean. He is friends with Lavagirl (Taylor Dooley), from Planet Drool. She is made of Lava and can shoot lava from her hands.

Anyways, they went back to Planet Drool at some point in the summer and he hasn’t seen them since. 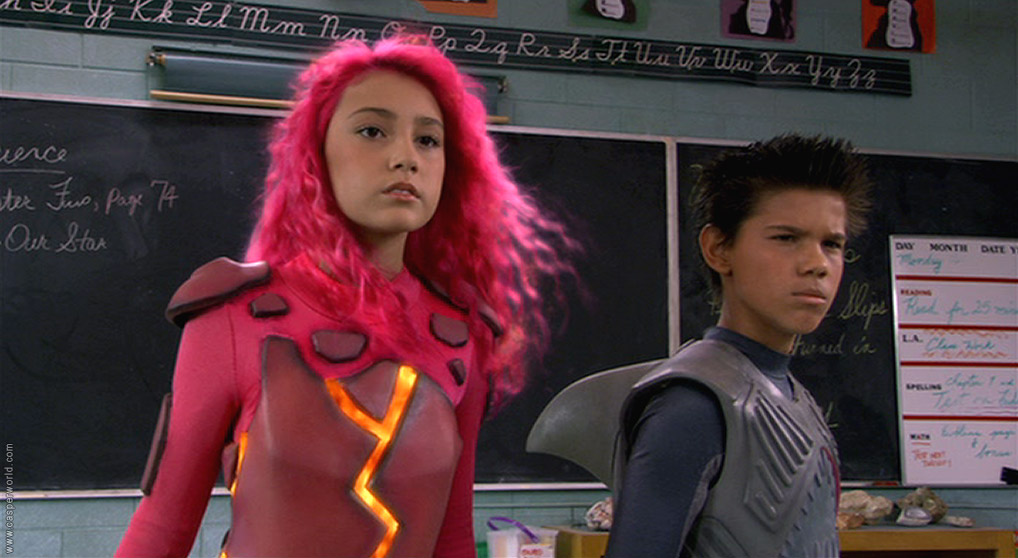 Guess what. His class totally doesn’t believe him. Because he is of course full of rotten cow shit. Mr. Elictricidad (George Lopez) wants him to redo the assignment I think. And this kid named Linus (Jacob Davich). He is a dick and picks on him with other kids and they steal his dream journal.

Don’t worry. One kid believes him, Marissa (Sasha Pieterse), so they are practically dating. She is also Mr. Electricidad’s daughter. 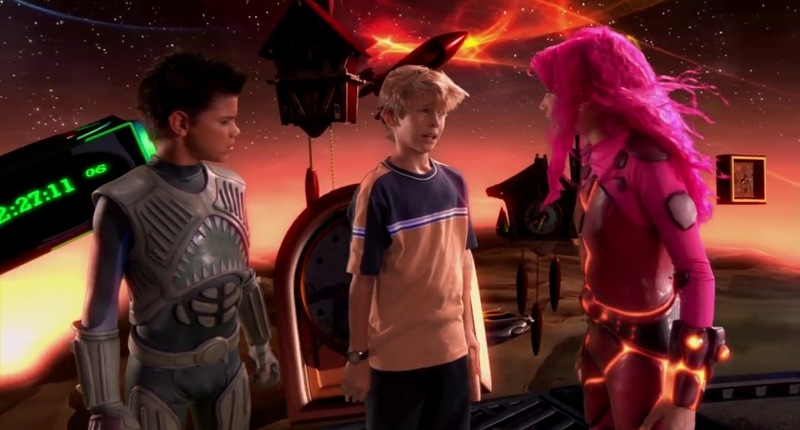 But if he bangs the teacher’s daughter, how will he also get with Lavagirl?!

Needless to say, his parents are also sick of his shit. His dad and mom (David Arquette, Kristin Davis) are probably going to get divorced because of his shitty dreams and how much he thinks they are real despite being 11 or something. They ignore his pleas in regards to his dream journal and told him to forget that stuff.

Next day at school, giant electrical storm hits and everything gets scary. No worries. Sharkboy and Lavagirl show up, much to everyone’s surprise. So they take Max on a shark rocketship up to Planet Drool, openly acknowledging that he should know how to get there since he made it all up.

Yes, Sharkboy and Lavagirl know they exist purely in Max’s head, in his day dreaming world, and they aren’t having an existential crisis. Even with this knowledge, Max doesn’t realize that everything that is happening is hogwash. 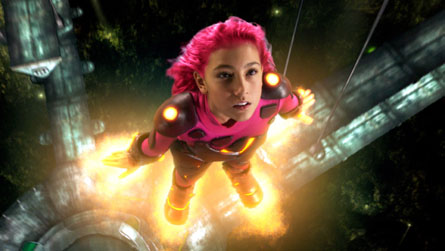 Not even magical hogwash, just normal dream based hogwash.

Oh hey, Planet Drool. Things are not as they should be. This is where all of his dreams and goals live, including the unfinished ones. Guess one, there are electrical storms here too!

Oh no! A bad guy, with a TV head named Mr. Electric (very original dreams) is ruining the place! He even has all the other kids on a roller coaster forever, keeping them awake. If they sleep, they can ruin dream world with their own dreams.

So they save the kids and battle Mr. Electric and lose terrible, putting them in the Dream Graveyard. I wish I was making this shit up. 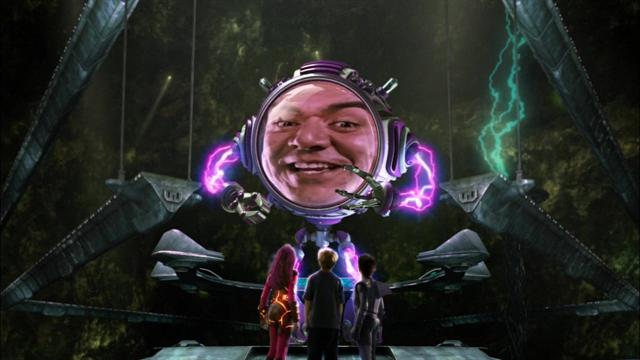 With the help of a never finished robot named Tobor (Also Lopez), they escape there and go to a happy place of milk and cookie dreams. They realize that someone else’s dreams must also be in Planet Drool making things go to shit. Mr. Electric isn’t the only bad guy.

Lavagirl and Sharkboy feel incomplete. They don’t know where their future is going and are missing parts of their past. They need answers! But Max doesn’t remember everything. What a fuckwit. He also apparently has powers of his own, but again, he doesn’t remember it. 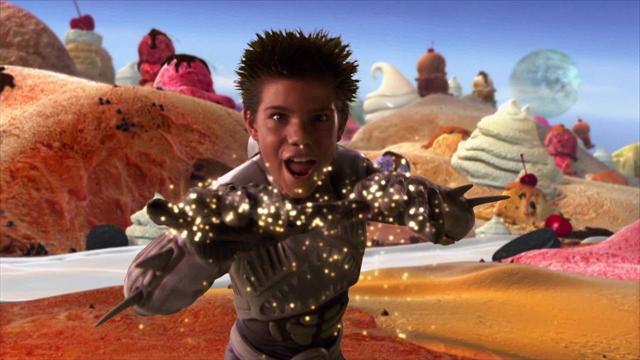 He’s got the magic touch, some would say.

Needless to say, his quick nap gives some answers. They also find out who is behind most of the negativity. Some dick named Minus (Yes, it is Linus), who has his dream journal. Bad news for Minus is that they realized that Max is the Day Dreamer officially, so he can imagine things on the spot and they can come true.

Sure, it took Lavagirl and Sharkboy back and forth going to the brink of death for him to realize this shit, but it happened. So eventually Minus realizes he is being a dick and he is cool again.

This does not save the day. Mr. Electric gives no fucks and he says he will destroy Max where he can’t protect himself. So he goes back to Earth. 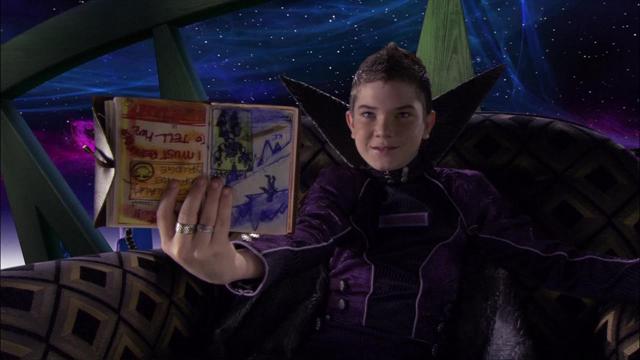 Of course he did fuck up the entire dream journal first. Whattadick, Linus, Minus, Bo-Binus.

Back on Earth, Mr. Electric intensifies the electrical storm, causing tornadoes and things start to fall apart. Mr. Electricidad is offended by the creation, since it has to have been Max’s dream come to life. But whatever. Deal with it.

Somehow Sharkboy and Lavagirl arrive to help save the day. They also make Max’s parents realize they still love each other and family is important. All in the same disaster!

I forgot to mention that on Planet Drool, there was also an Ice Princess (Marissa) with a Crystal Heart. Their plan was to find the Crystal Heart to freeze time, to allow them enough time to fix the planet. It turned out to not be too necessary. But Max brought it to Earth, so they use it to defeat Mr. Electric instead.

This is where everyone learns that dreams are what you make of them, and you should make them come true. 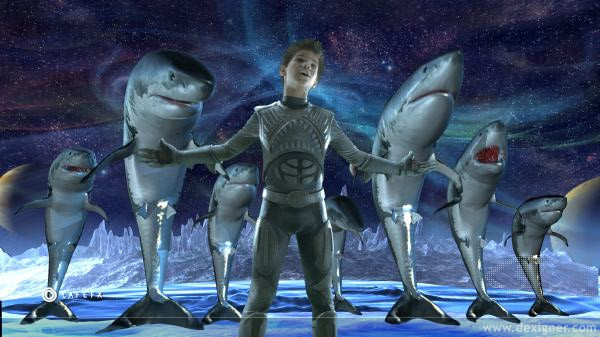 If you want to be the lead in an all Shark riverdancing experience, then by golly, make that shit happen!

I have a hard time believing that Robert Rodriguez, director of Planet Terror, From Dusk Till Dawn, and Sin City, thought in any capacity that this movie was decent. Yes, it came out in 2004. Yes, CGI was not as good as it is today. But this is beyond bad. This is like a $10 used bin in Wal-Mart CGI, if that existed.

The main draw to this movie would have been it’s 3D, I guess. But again, 2004 was well before Avatar came out and they changed the way 3D worked in theaters. This was probably shitty red/blue sunglasses 3D, so I am sad that I didn’t get to experience the 3D with my version. It was clear what they wanted to do with the 3D with the cheesy scenes and I am sure it came across just as bad.

Not to over-scrutinize a shitty kids movie but…the plot makes no sense and seems to fall apart the further it tries to play it out. The acting is bad on all fronts, adults and kids alike. Lautner was brought in because as a youth he was really good at martial arts, and all the flipping and jumping was actually him. He still is good at that now, but it was more impressive when he was like ten. Who would have thought that a kid with the shitty rap lullaby video would turn into a weird sex symbol.

If you hate visual messes on the screen, you will also hate this film. The entire dream world landscape was just ugly and bad.

Yeah. I may be harsh on this. But again, Rodrgiuez must know this is terrible, but he did it anyway for the lols. That is the only explanation for this mess of a pointless film.