Skip to content
HomeUncategorizedTeenage Mutant Ninja Turtles: Out Of The Shadows

Two years, Michael Bay released Teenage Mutant Ninja Turtles as a nickelodeon presents film, after 4 or 5 years of delay. And now, just two years later, we have a sequel!

Damn it, in my last one, I mentioned how forgettable the movie was. That means I also wanted to forget about it. But how can I forget about a movie if they go and make a sequel? 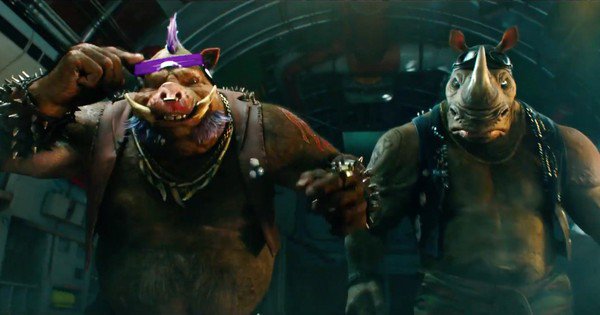 Based on that screen grab, then HELL NO IT ISN’T!

They let Vernon Fenwick (Will Arnett) take all the glory, and people love him for it. But now…now The Shredder (Brian Tee) is about to break out of prison! In fact, his break out involves teleporting, portals, and a whole lot of foot soldiers. And of course, Baxter Stockman (Tyler Perry), smart scientist who wants to do evil to be famous.

And now they have Bebop (Gary Anthony Williams) and Rocksteady (Stephen Farrelly). And the turtles get Casey Jones (Stephen Amell). Basically a nice fair trade. OH AND KRANG (Brad Garrett) is here to tip the balance for the bad guys!

Eh, yeah, I guess Megan Fox returns as April O’Neal, Brittany Ishibashi is female Shredder assistant ninja, and Laura Linney is a police chief or something. It kind of fluctuates.

While writing the plot outline, I couldn’t help but feel that this movie was just more of the same, with like, four more characters. And if it is more of the same, then it is still not too good, and making it crowded could add to the problems.

Like, for instance, Shredder not having any cool fight scenes whatsoever in this movie. And Splinter is in the film, but has maybe six lines and maybe a minute of screen time. Krang is only brought in for two scenes, his introduction early on (that goes too hectic and fast, like it was made for people with short attention spans), and then near the end. The ending scene was actually a bit more entertaining and longer, which is a plus.

But that brings us to all of the fight scenes. Basically every fight scene feels blurry and it requires you to fill in the blanks with what is going on. None of the fights are clear, every single one uses this lazy tactic. The first scenes of the movie involve the turtles running around buildings in NYC at night, and it set the bar for low quality action scenes. Hell, the final fight is actually in daylight, but it is still basically ruined with the CGI.

Yes, I both think Krang was cool in this film, while also disappointed in his big fight. The fight looked fun and creative, but again, they just blurred the whole thing together.

Bebop and Rocksteady were okay. They had more personality than the Secret of the Ooze versions and arguably took up all the screen time from Shredder/Splinter. Fox’s character wasn’t interesting, Casey Jones was only in the hockey mask once (early on, not even for the finale), Arnett was still annoying. Linney’s character was really badly done, but probably didn’t have a lot to work on with the scrip.

And honestly, this is the type of film where you might find yourself scratching your head, confused as to why the characters do certain actions. It seems like the dumb or extra complicated route is always chosen. Leonardo was acted far too strongly in the Asshole category, but the other turtles personalities felt right. Oh, and Perry as Baxter is one of the brighter spots as well. Go figure.

I can’t wait to be disappointed by another of these films in 2-3 years.