Hey look, a sci-fi action film! I will admit, when I saw the trailer I thought that this movie would be stupid. Some weird future where everyone sits at home, and they have much more prettier versions of themselves walking around doing shit, yet the user gets to experience the feelings so it is okay? These Surrogates probably just represent our dependence on technology/better video games, gone to an extreme.

Surrogates! They have become cheap enough so that everyone can have them! There was no real hobos to speak of (maybe, I will get to that). With the perfect robot body, everyone looks sexy despite their actual appearance, all they have to do is sit in a chair and take it. The rise of surrogates brought accidental deaths down to very low, and crime to an all time low. After all, With a world full of beautiful people, what could go wrong? 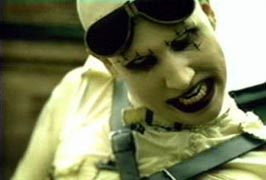 Oh yeah. Honestly, this shit still creeps me out.

BUT WAIT. Not everyone has conformed. There are colonies around the US (I am not sure if other countries are really talked about here) who think it is unnatural and want to just be humans. These may just be hobos too. They live together, have no other jobs. Follow a prophet who will help end the robot scum. Speaking of ending robot scum, one guy dies from some crazy gun. His surrogate explodes, and the user is killed (first time ever). That guy is the son of creator of Surrogates.

I wonder if I have to explain this picture?

Thankfully, Bruce Willis is on the case. He has to investigate this threat, and crazy enough, he has to do it without a Surrogate. Being a real person in a robot world is crazy. Crazy!

So while the story should have been good, it just…fails. Most of the things that happen are pretty obvious. The ending you may be already to guess, even. Action scenes seemed to be better described as chasing scenes. Some helicopters got destroyed, but you know, barely any people got capped. Given the surrogates. The surrogates are also creepy of course, as they all look too perfect, but that is what they were going for.

Despite being an interesting concept, the execution of the concept left me bored. I didn’t care what happened to anyone by the end. Not even the fat dude.