Sucker Punch was a highly anticipated movie when I first saw the previews on TV. I mean, it just looked visually stunning. I knew absolutely nothing on the plot, I just knew that I wanted to see it.

And I did! In theaters. Leaving with mixed reviews. Despite that, I knew I still one day also wanted to see it on Blu-Ray. Because man was it pretty.

Movie begins with Babydoll (Emily Browning) fighting off her step dad, who wins and puts her in a mental institution, now that the mom is dead, so he can claim the inheritance. But right as she is about to get lobotomized by the doctor (Jon Hamm!) it switches to a brothel of some sorts, with young women dancers, recreating the exact scene. Because Lobotomies are hot. Sweet Pea (Abbie Cornish) is the star of the Brothel, but Babydoll is a new girl brought in from the Orphanage. She doesn’t talk much and seems upset.

Probably because she is in a brothel. The other main girls there are Rocket (Jena Malone), Blondie (Vanessa Hudgens), Amber (Jamie Chung), taught by the dance instructor (Carla Gugino). But when she is made to dance, she goes on a weird fantasy adventure, where the Wise Man (Scott Glenn) tells her how to escape, and the items she needs to collect, along with a secret item.

So Babydoll makes it her mission to go and collect these items, while every time she dances, she goes into one of these fantasy trances, whether it is versus the steampunk nazi federation, and robot trains, and etc. But what is really going on the whole time? And how the heck does she look when she dances? Also, Oscar Isaac plays the Brothel owner / main bad guy. 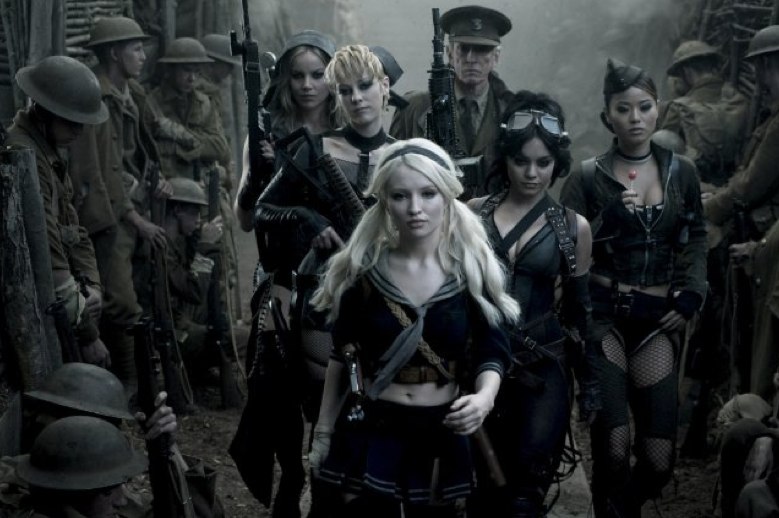 Lot of action violence, all done by tiny women!

Some will say that the only reason this exists is for men to have things to oogle. But pfft, people don’t make movies like that. More specifically, to make nerd guys go crazy. But nerd guys realize they also want a good plot with their crazy action fantasy movies featuring a cast of mostly women. The plot is obviously the weakest part of this movie. It is incredibly nonsensical and hard to explain.

That isn’t the only problem. Some of the fantasy scenes are just WAY too long. I think the first one with the full group of women, I feel like it drags on forever. I was thinking we’d never go back to the main plot line of the movie, escape from the Brothel. These scenes could have been editted down a lot more, to make the pacing better and probably more enjoyable.

But also, this CGI fest is just…so pretty.

Just to prove a point, here is a third picture.

And it is so fucking stunning. Just think, if the plot was better and edited it down, this could have been the coolest experience ever!