So I just learned that Step Up: Revolution is not the original name of this movie. Nope, originally it was called Step Up 4: Miami Heat. Wow. If anything, I can say that they did a good thing with the name change.

After all, who doesn’t love a good revolution? Wait. One second. Turns out people in power don’t like revolutions. Hmm. This title could be a controversy then.

Well that is good, after all, who doesn’t love a good controversy? Oh what’s that? Shy people hate controversy? That is fine, we can ignore shy people. They generally aren’t going to be dancers anyways. 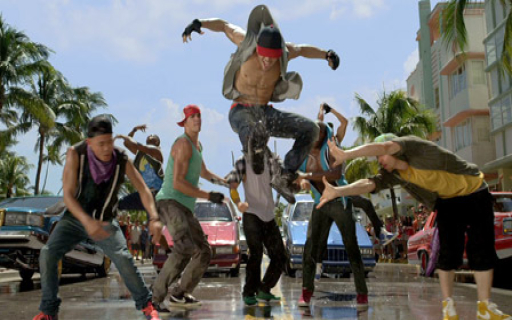 Pictured above: No shy people

Miami has a lot of things going for it. One of those things is that people like to live there. But in this world, they have this crazy never heard of thing before called Flash Mobs. But instead of a regular flash mob, it is the “same people” every time, and they are a public disturbance, because they are the only type of Flash Mob. Heck, they even call themselves The Mob, for creativity purposes.

Lead by Eddy (Misha Gabriel Hamilton, who has past roles as Dancer and Detroit Dancer) and Sean (Ryan Guzman, first role!), they rock the streets and get them recorded and put on the youtubes. Why Youtube?

Because for whatever reason, they are in a competition to be the first to get 10,000,000 views on a video (or overall their videos? Not sure). Because the first to do that gets $100,000, so they do these dance flash mobs to get hits. But what if they can turn their mobbing into a message?

Emily (Kathryn McCormick, formerly Dancer, Audience Member 1, and Sexy Girl 1) is in Miami to audition for some fancy dance company, but her father, Mr. Anderson (Peter Gallagher, yes he gets no real name) doesn’t really approve. In fact, he is a real estate grabber, for his new and fancy hotels, and he plans on buying up a huge plot of land in Miami to renovate and make awesome luxury spots. Turns out this involves some of the best hang out spots and homes of some of our main cast, and that is bad.

So after she secretly joins their group (because she needs to learn to let her wild side out more in her classical /modern dance stuff, by adding some street moves), they come up with the idea to protest this stuff, making them become bigger and more powerful. But I mean, can dancing stop commerce? Also featuring Cleopatra Coleman as their DJ and Stephen Boss as another main dancer. 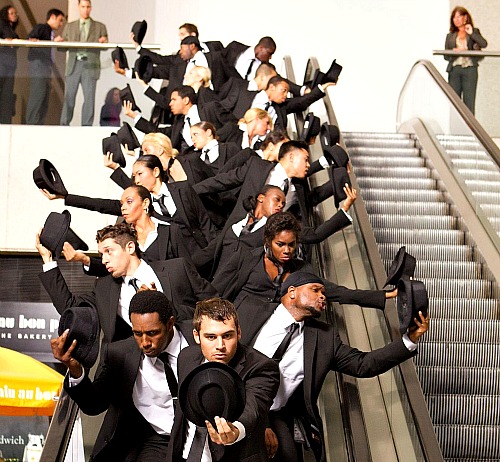 Just imagine how uncomfortable standing in the middle of that would be. Closeness on an escalator, gross!

You know what, there are a lot of plot problems in this movie. I could ignore them, but fuck that, lets talk about them.

First off, the youtube competition makes no sense. Everytime they mention it, I cringed because they made it seem like they didn’t even know how the internet worked. Was a vague competition, and tons of videos already have over 10,000,000 views in real life. Similarly, a video wouldn’t take months to reach that high either.

Secondly, what the fuck Emily plot line. Really? She needs to add more fire and passion to her dances? And so she starts doing hip hop crazy stuff on the streets? How is that not pretty much the entire plot from the first Step Up?

Anyways, this is a dance movie though. That is what is important! Well, first off on that, I hated the music. Pretty much every time. The best DJ in Miami my ass, what was that shit?

The dancing to the music? I wasn’t impressed. I am pretty sure I have seen dancing like that before, and well, it wasn’t as cool watching it in this movie. The only dance scene I really liked was the above fedora/business scene, their first protest dance. But hey, I might have just liked that more for the outfits and props.

Should I have complained that the movie theater staff never came out and flash mobbed our theater? Probably.