Honestly, I was willing to let Sharknado go by the wayside and ignore it forever. Sure, it is one of the most hyped SyFy original B-Movies in a long time, but it was even met with less than average number of watchers. Go figure. Most people just talked about it, very few watched it.

So why am I reviewing Sharknado? In honor of the life of Cory Monteith of course. Made famous by his character Finn on Glee, (and only that), he was an actor who recently died due to alcohol and heroine.

But no, Cory is not in Sharknado. He is now forever associated with the film for a different and worse reason. Case in point, here are his last two tweets before death. (For those who don’t know how to twitter, the bottom tweet is the oldest).

You’re damn right I retweeted them.

Maybe he actually died as a Canadian Government cover-up, as he was able to figure out the Sharknado conspiracy, but I doubt we will ever know for sure.

The vague plot of Sharknado is that a hurricane decides to hit the California coast. Los Angeles is right in its line of fire. The storm is causing sharks to run from it towards to coast, so there are dozens (hundreds) of sharks on the beaches, attacking people in about a foot of water. But when the rain comes, so does flooding, so the sharks are able to get further in land, still running from the storm or whatever. Even going into the sewer system! The sharks are also pissed off, so they will bite and eat anything they get near, except other sharks.

Eventually tornadoes hit LA as well, which pick up the sharks, and then in addition to destroying stuff, they also hurl sharks conveniently at anyone nearby. Well, it takes fifty minutes before there are sharks in a tornado, everything else before that is just flooding or minor wind based.

To add some plot to it, our main character’s name is Fin (Ian Ziering) which is funny now for two reasons. His two friends (Jaason Simmons, Cassie Scerbo) agree to help get to his ex-wives (Tara Reid) house, to protect her and his daughter…while also battling flooding, random sharks, and I guess the weather.

Because once the tornadoes start, clearly they have to find a way to stop the tornado itself. Not just wait it out like people have done for every other tornado in history. 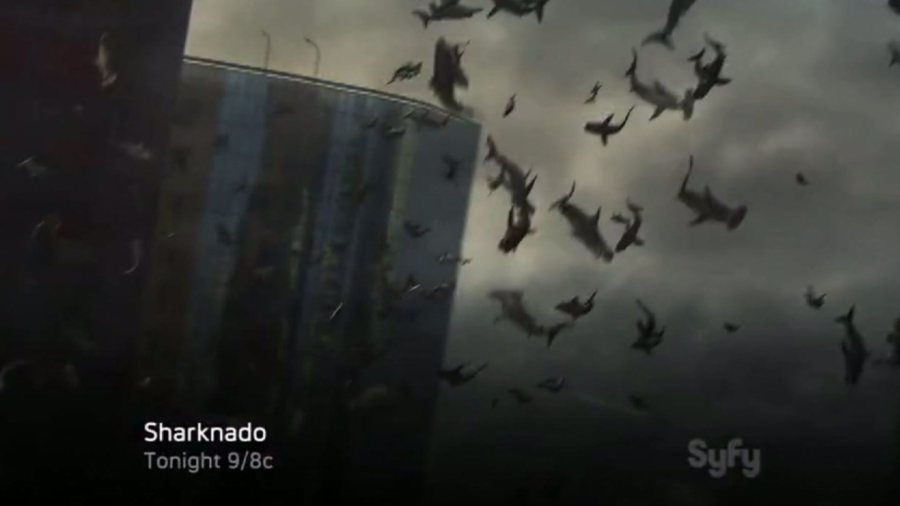 Most of the movie is void of sharknadoes. I guess that is why the images were so hard to find online.

See, there are two types of B-Movies. Because B-Movie generally just means really low budget and they usually are overly campy as well. Still, there are two types. There are the types that are either entertaining through good dialogue or action, and those that are made on purpose to be bad. Those ones that are only enjoyable if you are drinking and making fun of it with friends. The first one is doable, just hasn’t been true recently. Just ask Bruce Campbell.

Sharknado fits into the second category. Seriously. Watching it for actual entertainment on your own is impossible. You will just get mad. It does this on purpose, but most of the best action happens off screen, which just means I am left bored. The danger they have to get through is boring, the dialogue is boring, and there isn’t even that much shark tornado action! The fuck. What if Anaconda had the snake only in the final quarter? You’d be pissed.

So I am pissed at Sharknado. They could have made it ridiculously awesome, but chose not to, because fuck it, low budget movies don’t need to make too much. Just enough. Dumb ass teenagers on the internet are hyping it up, and now there is a sequel. Shit. How can they do a sequel when they didn’t even have enough material for one movie?