There is a bunch of them in this town, and they are barely even human.

That is all the pop culture I can pick up from that word. Two is a fair amount, hopefully this movie gives me another. 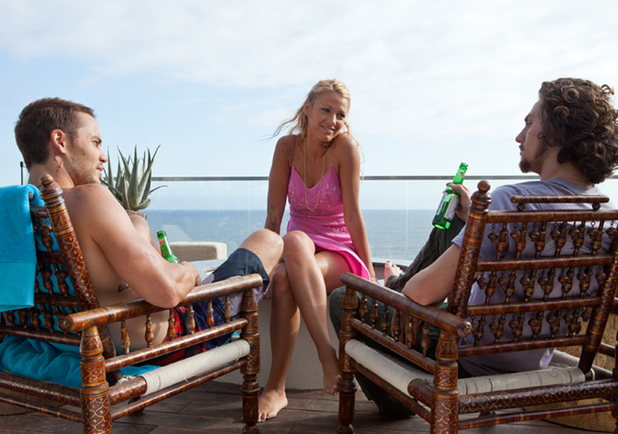 Look at those BRUTES, those SAVAGES, sitting in California and looking fantastic. Sickens me, every time.

O (Blake Lively), short for Ophelia, is the narrator of this tale, and born rich local of Laguna Beach, California. She meets Chon and Ben, working for their pot empire. POT EMPIRE? This movie is about drugs oh no!

Chon (Taylor Kitsch) is a former marine, serving in Iran and Afghanistan, and when asked by Ben, he assured him that Afghanistan had the world’s best pot. Ben (Aaron Johnson) is a free thinker, okay hippie, with big world visions involving giving water to Africa and stuff. But also hey drugs. He has a degree in Business and Botany, and he gets Chon to get some of those seeds back to the states. They are able to grow them with great attention, giving them ridiculously high THC percentages, and make an empire in California where they are rich and can donate a lot to the world charities. Chon is also the muscle, he has a few Iraq buddies to help them out in dire situations.

They’ve been giving cutbacks to a local DEA higher up (John Travolta) for years to keep their business sailing, but when a Mexican Cartel from Tijuana wants to hire them for three years, to use their pot, resources, and people, they get a little bit worried. Especally when the offer presented by one of their lawyers (Demian Bichir) turns out to be more of a demand, and them saying no can get them in a lot of shit.

More or less, it results in the kidnapping of O from both of them. Oh who is O? Their mutual girlfriend. She sexes up everyone. And she loves them both for different reasons, but it leads to nothing bad between the guys so it should be fine. So now Chon and Ben have to try and save her, not die, avoid their really bad ass hit man Lado (Benicio Del Toro) and convince Elena (Salma Hayek), the head of the organization to let them go freely with O, at any cost. 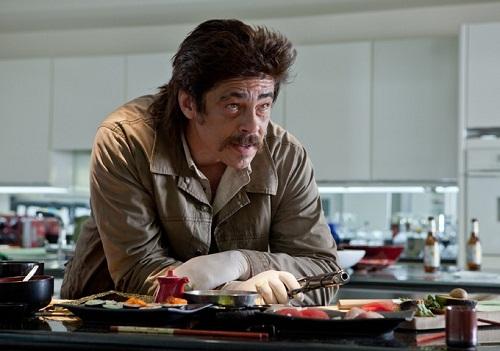 What a fucking great character. No jokes for you, just that fact bomb.

Turns out this movie has a lot of unlikable characters in it. Pretty much no one is the type of person you’d want to root for. So it was hard to really watch the movie on that aspect, as it was a lot of gray area. Unfortunately, the character I liked the least, O, was also the narrator. The dialogue for the narration was bad, and the character was like a spoiled rich kid who has no problems, until the movie. And I don’t think really anyone would care about her, or her kidnapping and constant danger. It sucks, but its true. Let her die, I say. Solves most of the movies problems.

The other big issue I felt was the ending. It didn’t really seem to fit the rest of the movie, almost felt lame. It was different, for sure. But not what I would have wanted. If you see it, you will understand.

But other than that, great performance from Benicio Del Toro, who looked completely different in this movie. Also, Aaron Johnson? He looks ten years older at least than he did from Kick-Ass, and not at all the same. I was shocked when I realized it was the same guy.