2017 is the year of the animated disappointments so far, and yes, I still have not seen The LEGO Batman Movie, get over it. It might be funny, I just don’t care too much, as Batman was what I disliked the most about The LEGO Movie.

And I figured I would be skipping Rock Dog, it was an animated film released almost a whole year prior in China. You know, because they made it. And I know America isn’t number one at everything anymore, but I know we are still number one at animated CGI films. Yes, some anime notwithstanding, we do CGI cutting edge and well, so foreign films just seem behind.

And also the title, Rock Dog. Sigh. Come on animated films, be better.

Way way far away, in a land called Snow Mountain (which is, guess what… a snow mountain!), there lives a young Tibetan Mastiff named Bodi (Luke Wilson). Bet you thought his name would be Rock Dog. Nah, not yet.

A long time ago, a bunch of wolves led by Linnux (Lewis Black) were driven out of their town by Bodi’s father, Khampa (J.K. Simmons). Khampa is pretty sure the wolves will eventually come back, so he is training up the local sheep and his son to protect it again once they come back. There is also some magic stuff about finding his inner fire to help defeat things, but uhh, that is weird.

Turns out Bodi just wants to rock, once he discovers what music and rock music actually is. It is all he thinks about, it is his new dream and passion, and he is a bit of savant. But his dad disapproves, so he one day just goes out on his own to prove him wrong.

After getting to the city, he heads to a place called Rock and Roll Park in order to find a band and make a big name for himself, like the legendary rocker Scattergood (Eddie Izzard). But the wolves are out, the people are mean, and Bodi might just have to make it on the music biz on his own. 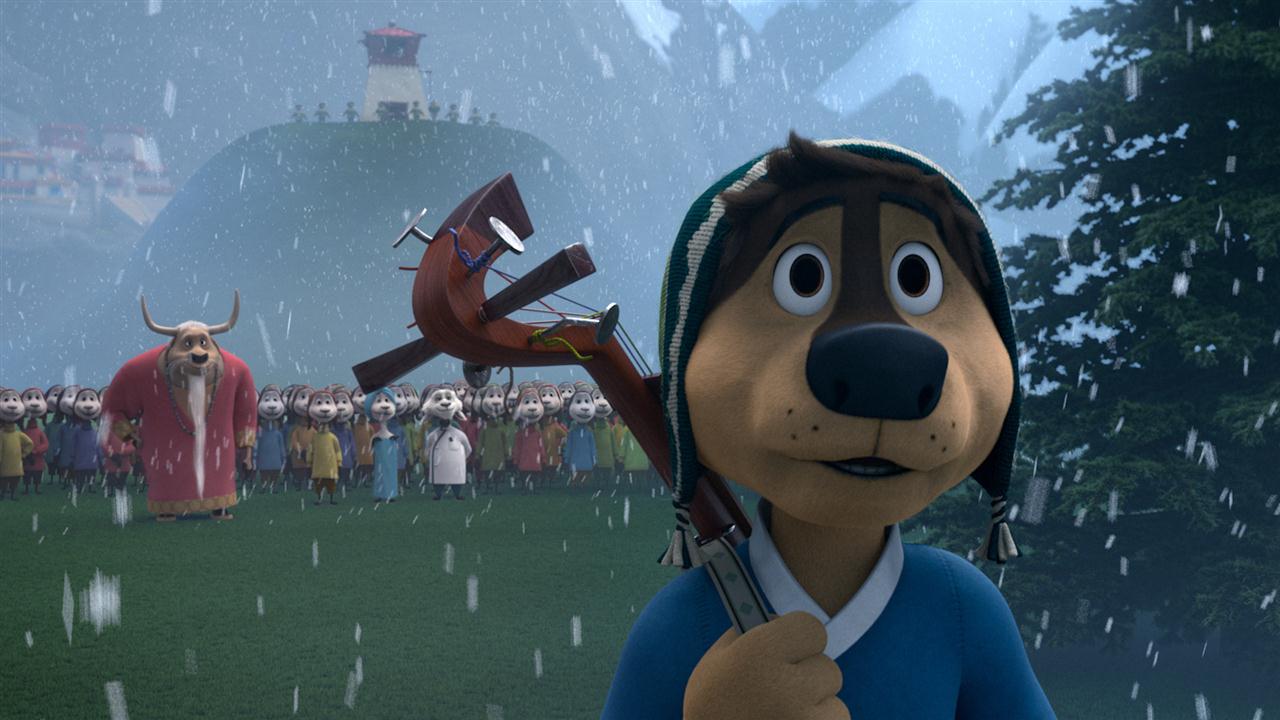 The snow or rain or whatever is happening is indistinguishable from that yak’s beard in the background.

Rock Dog is another animated film that ushers out a line of celebrities to do their voice work instead of real voice work, because names sell. Names like Eddie Izzard. Thankfully, two of those names are J.K. Simmons and Sam Elliott, who have unique voices and add something to the film. Too bad their characters are in Snow Mountain, so only at the beginning and the end of the film, really.

The premise of Rock Dog is mostly shit. Anthropomorphized badly explained worlds are all over the place, and this does nothing to rise above a Pre-K TV program on Disney. It doesn’t feel fully fleshed out and it is a super simple story. A lot of it about a dog who just wants to play music in a world that doesn’t rewward newcomers.

But despite its lack of originality, great CGI, or anything new to offer the genres, it is still an average movie.

I mean, I am not going to go out of my way to make sure my kids see it, but if they do see it, I won’t be annoyed at their mind being poisoned by drivel. It is just a bit dull for those of us who have been there, done it, when it comes to these types of movies.