Holy shit (hah!) is this movie short! I mean, my bar said 87 minutes, but the credits began at the 80 minute mark. The opening credits was a good chunk as well (even though there was story during that, but more on that later).

What is this, Land Before Time VI? (No. That is 77 minutes long). A friend of mine said that he thought they left a lot of the movie on the cutting room floor, which I have to agree. The plot confused me at times, and its not like this is hard hitting thinking material. But everything was either rushed. Or just not much happened. It is hard to tell. 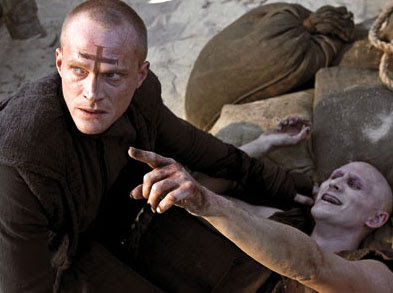 Above: Either hard hitting thinking material, rushed material, or nothing at all.

Did I find things interesting? Yes. I enjoyed a majority of the fight scenes, visually they were great. Speaking of visually great, the opening of movie was good too. I believe it was done by the Priest artist of the comic, Hyung Min-woo. Probably why it was overall my favorite part.

I liked that the vampire eggs apparently hatched the same way a whelp hatchling would (Yah, I went WoW). I understand why the vampires lacked eyes and were very bug like. That is just science! I also like how it was a pseudo-western with kind of science fictiony angle.