Uh oh. Pitch Perfect. A movie with an overload of things I like! 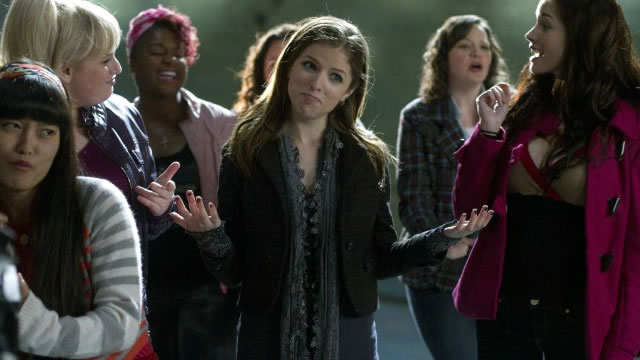 Don’t even get mad glee lovers. Its all just jokes. Jokes and raps.

This movie takes place at the fictional Carolina University. Probably somewhere in North or South Carolina, who knows. There are four main groups on this campus, a madonna group, a pot head group, The Treble Makers, and the Bellas, an all lady group who only sings women songs from before 2000. Kind of lame. But somehow they made it to the national championships, along with the Treble Makers, lead by Bumper (Adam DeVine).

Unfortunately, Aubrey (Anna Camp), the captain of next years squad blows it during their first number and they become a laughing stock. So much that they lose all of their members, except for Aubrey and the second in charge Chloe (Brittany Snow), and have to rebuild from scratch.

Enter Beca (Kendrick). Freshman, doesn’t want to go to college though. She wants to move to LA and become a famous DJ and produce songs! She loves mashing up music on her computer, but her dad and roommate don’t see the point. She also hates singing. But hey, her dad gave her a promise! If she can put forth effort into joining a group and actually giving college a chance, if she still wants to leave after a year, he will move her out to LA himself. Hells yeah!

So she joins the Bellas, who are more ragtag than ever. Yet for whatever reason, Aubrey refuses to take advice from others and makes them do last years set again. Over and over. Every competition. Can’t even spice things up. Unless you count letting Fat Amy (Rebel Wilson) have a solo. They also have a rule of no fraternizing with the Treble Makers. Too bad another Freshman, Jesse (Skylar Astin) has the hots for her and won’t leave her alone. He joined only thanks to the obsession of his roommate, Benji (Ben Platt) who didn’t make the team for being “weird”.

But can the Bellas regain their former glory and win nationals again? Will this just be another stereotypical movie where the ending is obvious, along with relationships? Could John Michael Higgins and Elizabeth Banks be any funnier as commentators of A Capella groups? 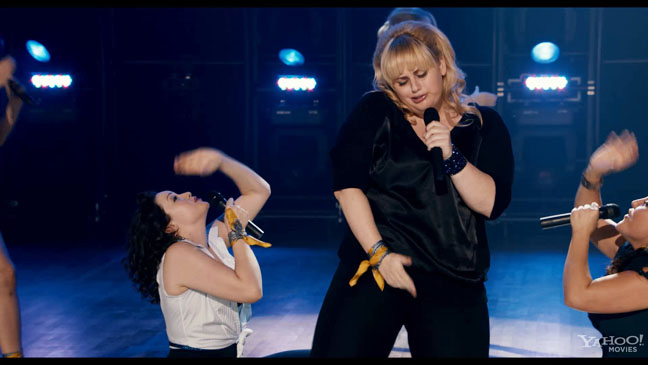 I think my favorite character in the movie ended up being Jesse. Why him? Well, he is a guy who really likes movies. Wants to work on soundtracks for them though. Loves the Breakfast Club the most. People who like movies and can sing tend to be awesome people. Just saying, ladies.

After watching Pitch Perfect, I think my biggest complaint is that there wasn’t enough music. I immediately got the soundtrack after I saw the movie, but I was disappointed there wasn’t full versions of some of the songs, and a few of the songs felt a bit more polished than the movie counterparts. You probably wont get the full effect of the movie if you aren’t familiar with a lot of the more popular songs the last couple years, because knowing how a song normally sounds is half of the fun.

Like recognizing the Cups song Anna Kendrick did, seen here, popularized on the internet before hand. Most of the songs and videos appear to be on YouTube, so if that is all you care about, you are set.

But if you want some funny scenes with your a capella songs, some love dialogue, and a few more cameos that I didn’t feel like mentioning, then go see this movie with your friends.