Oh Paranormal Activity series, how you disappoint me.

Originally, Paranormal Activity 5 was supposed to come out in October, as the other films had all done the four years previously. The only news about it was that it would star Demi Lovato. But something changed. They weren’t going to continue to give us another film with no more answers and a lot more bullshit. No. We were getting a spinoff.

We were getting Paranormal Activities: The Marked Ones in January, and it has a Hispanic theme to it. Yay spin-offs. Hopefully this one doesn’t have too many scenes where if you blink you will miss the scares, which I found annoying from the first one. 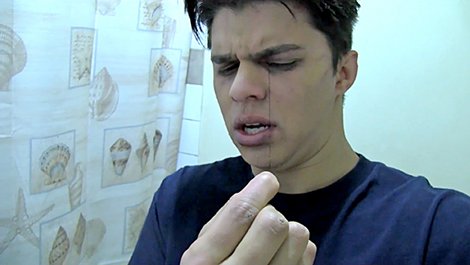 Oh huh, apparently if you blink you might get more than you bargained in your eyes.

This part of the franchise also takes place in the majestic California, in the summer of 2012. Jesse (Andrew Jacobs) just graduated high school and he has his whole life ahead of him. So, perfect time to just continue to live with his grandmother (Renee Victor) in her small apartment complex and not worry about things like jobs. Fuck jobs. Especially when a relative gave him a handheld camera to use, and a gopro, so he can just dick around with his good friend Hector (Jorge Diaz).

Well, beneath their apartment also lies a weird old lady, Anna (Gloria Sandoval), who some claim is a witch. They do end up noticing some strange stuff coming out of her apartment, noises and people, including Oscar (Carlos Pratts), the valedictorian of his high school class. But when she mysteriously dies, from Oscar, that is when stuff gets weird.

First, Jesse wakes up with a weird bite mark on his arm. Next thing he knows, after getting mugged, he is able to throw the muggers far from his body without even trying. Hey. He has basically developed super powers. Anything he really tries to do, works for him. He can’t fall. He can skateboard well. He can do some telepathic shit. Even his (sister? cousin? Not sure?) Marisol (Gabrielle Walsh) is getting involved with the shenanigans. 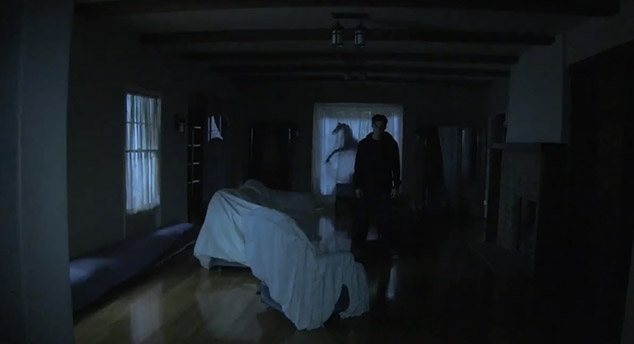 I’d say my biggest beef with this series is its overall lack of direction. Why are they being piss poor at explaining what is going on with the witches and the demons and the possessions? Because they don’t know, and have no game plan. They are just winging it as they go. That is the only explanation that they can make a prologue movie (#3) and not give any real answers, just more confusion, and make a movie about a different family (#4) that just adds more confusion and no coherency.

But…I think…I think more of it is making sense with this movie. Shocking I know. Yes, it does bring more elements. But it introduces one very cool concept to the series, which really shows itself off completely in the ending, which made it a tad bit more wicked in the grand scheme of all the things.

Yes, elements of the film are basically identical to the end of 3 and 4. Bunch of old white ladies mostly wearing black at night. But they changed it enough. They made characters who can fight back a bit, which was exciting to see. The two male leads had fantastic chemistry together, and made the earlier parts more amusing.

Although they definitely fit this spinoff into the main series pretty well with cameos, I think parts of it do contradict other elements of the series. They really don’t know who they want their main villains to be.

This film I wouldn’t classify as super scary overall, but it did have its moments.

Fuck it. I didn’t like really any movie in this series. But this one was okay. I am glad they did the spinoff, this is now my favorite Paranormal Activity. Which sucks, because if I want to buy it, I kind of have to go and get the other 4 or else I won’t have the complete set… Sad times.