Live action remakes are of course all the rage nowadays, but Pan is not necessarily just another film in that trend. The Peter Pan story is older than Disney, so anyone can do anything they want with it. In fact, Disney plans on eventually doing their own live action Peter Pan movie within the next decade already, so you might as get used to it.

But Pan on its own can be something different. After all, we had Hook in the early 90’s, a very diverse film, both in its cast and how people took to it. A modern Peter Pan story, with a grown up Peter Pan! How dare they! I personally loved it and thought the film had a lot of heart.

So we have Pan, which has a similar naming scheme to Hook, going the opposite way and making a Peter Pan prequel. Peter when he was just a regular boy who couldn’t fly. People love Origin stories right?! 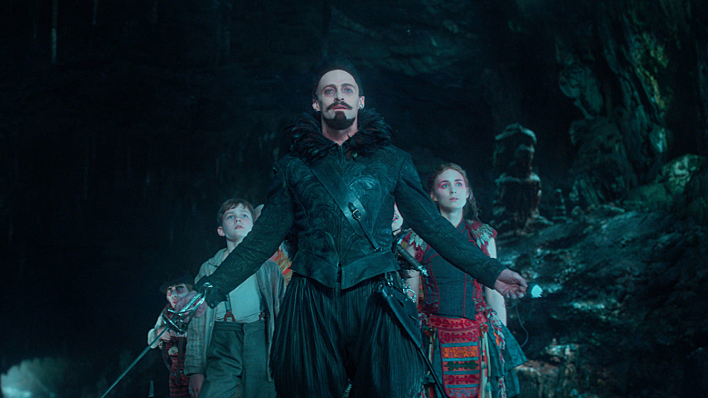 Especially if they have thousands of costumes and beards and make up.

Peter (Levi Miller), like every good Orphan, is left as a wee little baby on the steps of an orphanage by his mother Mary (Amanda Seyfried). And he never sees from her again. Now he is about…I dunno, 11. World War II is of course happening, so London occassionally gets bombed. Peter’s life is spent defying the nun (Kathy Burke) with his friend Nibs (Lewis MacDougall).

Next thing Peter knows, he is on board a flying pirate ship. The ship goes to Neverland of course! And the ship has been stealing Orphan boys around the world for ages. They are to be free and to live their lives as awesome people, as long as they can work for it. Namely, Captain Blackbeard (Hugh Jackman) wants them to mine for Pixie Dust for some secret reason.

Yadda yadda, Peter meets James Hook (Garrett Hedlund), with both hands, they find out her can fly, and eventually they escape with one Sam Smiegel (Adeel Akhtar) to get back home. However, Peter thinks his mom might be out here, so he wants to stay and look for her. This gets them to meet the natives. There they meet the Chief and Tiger Lily (Rooney Mara) and a great warrior Kwahu (Tae-joo Na) and find out that Pan is supposed to be some Chosen One Jesus figure to lead a revolt against the pirates and free Neverland.

Yay fun! Peter just wants to find his mom though, so… 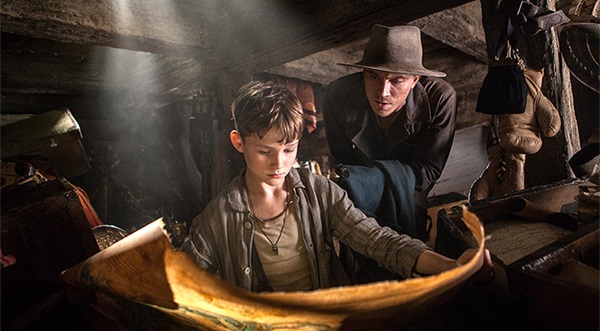 At some points this does feel like an Indian Jones clone though, so watch out for snakes.

I just remembered. Almost no one likes origin stories. That is the biggest complaint about modern super hero films. Every new person seems to need an origin story. Even if we have already seen it many times before in film. We get shit like Fantastic Four where over half the film they don’t have any powers.

Technically no one knows about the origins of Peter Pan, but that is because no one cares. Peter Pan before he was a pirate fighting flying bad ass, was what, none of those things? So we get a story about a regular boy? I am not saying that regular boy stories are boring, because there is a shit ton out there, but knowing he eventually becomes someone like Peter Pan kind of ruins it a bit.

Pan is a strange film that doesn’t seem to know what it is. It is all over the place in terms of story. Blackbeard as the main villain seems strange, but not as strange as Hook being Peter’s BFF older friend. Sure, you might be thinking a Peter Pan origin story means we get to see a Captain Cook origin as well. We get to see that crocodile bite his hand off, fear of clocks, all of that. That could be fun! Well we get about jack and shit of that. The movie ends with them taking some boys off to Neverland, all happy. They have a few references, but no, we don’t get any of it. They want to save that for some futuristic Pan 2 that now will never exist.

See, that would have been a good story. To see what happened to Hook to make him a bad guy. What ruined their friendship. But we get nothing from this story and it is a lot more wasted potential.

Speaking of none of that, there was a lot of hullabaloo about the song choices in Pan. For some reason, large crowds in Neverland (set in World War II) are singing Smell’s Like Teen Spirit and Blitzkrieg Bop. I didn’t mind how they sounded months ago, but the problem is they have NO CONTEXT at all in the movie. They don’t fit the events around them, the lyrics don’t match anything, they make absolutely no sense. They are terribly added to the film, so they should definitely be mocked endlessly.

Pan. Wasted potential. All spectacle. Not even Jackman was good in this one. I feel a bit bad for Mara. At least has Carol.