What? You didn’t hear about the Lionsgate animated film coming out mid January? What? Did you also not hear about Strange Magic last year around the same time, which ended up as my #2 Worst Movie of 2015?

Norm of the North has also not received many trailers or TV spots. It is the type of film they are releasing and not expecting much. And let’s not forget that the critic screening of the film is Thursday night, at a time when normal people can already pay money to see it. That is where you put movies you don’t really want the critics to ruin.

But maybe they do expect something out of it. After all, two sequels have already been announced. The sequels are only planning to be 45 minutes long and straight to DVD, but they are still planned!

Here is the real question I wonder though: The Nut Job 2 was also scheduled to be released on the same day, but it has apparently moved its date. However no one out there knows where it was eventually pushed. It has disappeared off the map. Did Norm of the North somehow eat it? 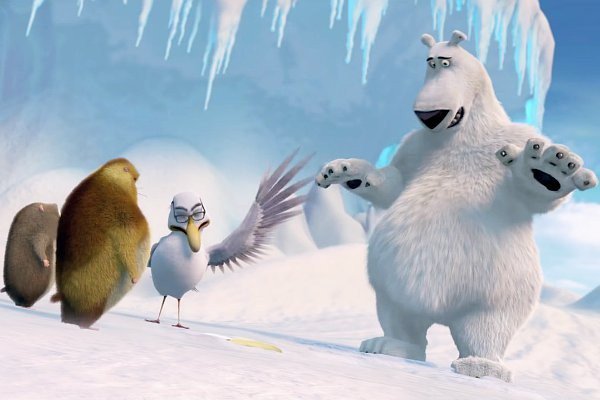 He is looking kind of chunky.

So, we have a polar bear named Norm (Rob Schneider. And now you know what you are working with here). Lives in the arctic. And he can speak Human. We learn this when he tells a seal his life story about why he cannot eat the seal because he is a terrible hunter and doesn’t do polar bear things anymore. Just humans. He in particular likes to dance, of course. He calls it the Arctic Shake. Remember that. That will be important later.

The only other animal who could speak Human was his grandfather (Colm Meaney), the king of the Arctic, but he has disappeared. Speaking of shenanigans, there is a house suddenly on the ice! Fully furnished and ready to be lived in. Apparently it is a model home and some group is shooting a commercial, hoping to sell homes to get people to move to the Arctic. It is an untapped reservoir luxury gold mine. Or something.

Norm tries to get them to flee but only helps them make a good commercial. The owner, Mr. Greene (Ken Jeong) just wants to rip people off. He also has the idea to use an actor to dress up like a polar bear to sell their idea to the world. Of course Norm sneaks to NYC to become that actor and put a stop to everything. But he also feels bad for the PR lady, Vera (Heather Graham) who just wants to get her daughter (Maya Kay) into a good school.

Time to Arctic Shake his way into America’s hearts and stop the Ice take over from happening. 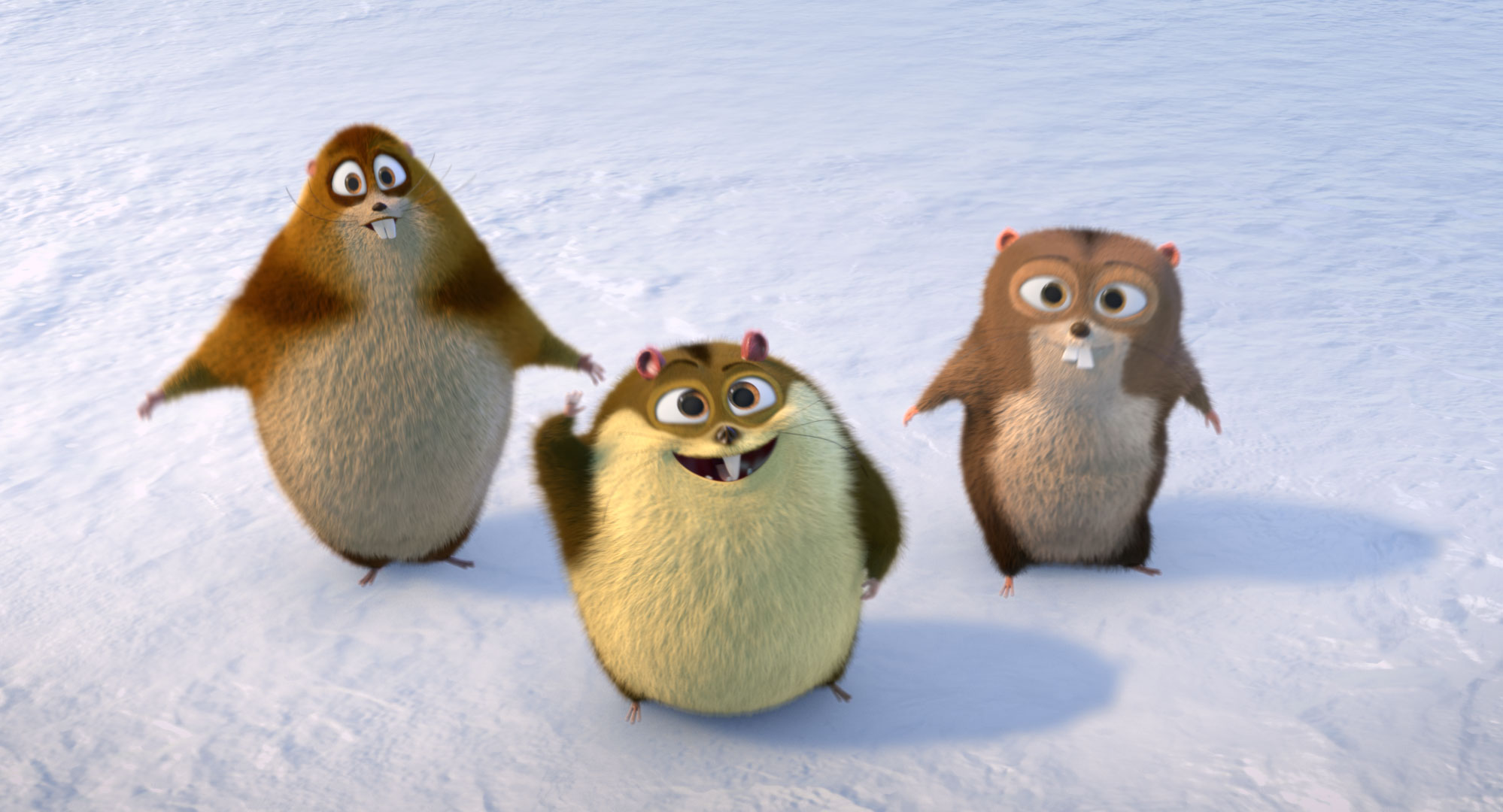 And these little fucks.

Oh where do we begin. Sure, the lemmings. That is what those tiny things are, and three of them join Norm on the adventure. They are apparently indestructible and can do anything, making them a perfect plot device to solve any and all problems. Except for tense moments near the end when characters decide to not use them to untie them for some reason. Oh and they are vulgar too. They pee a lot on things and fart and burp and teehee. They are going for the fucking Minion market and it is despicable.

The plot is paper thin. Points move too fast without a lot of explanation. For some reason none of the animals will believe Norm about the house, despite it being a physical thing anyone can go to, and a lot of witnesses (The Lemmings) and a respected community member. They just laugh at him…for some reason. And in the conclusion, despite none of these same animals going on the journey, they totally believe everything because The Lemmings say so, which is totally contradictory to how they behaved earlier. There is no sense to any of it.

Part of the plot involves getting America to like him shown by some fancy real time approval ratings graph that everyone can just access about things. And after going on a talk show, says one thing, he dances, dances in the street, and everyone loves him. Yay resolution! Well done bear. It is ruining Shut Up And Dance for me now.

The animation was poor and blocky. A final storm scene was almost painful to look at. The Coca Cola polar bear commercials have better overall quality to them 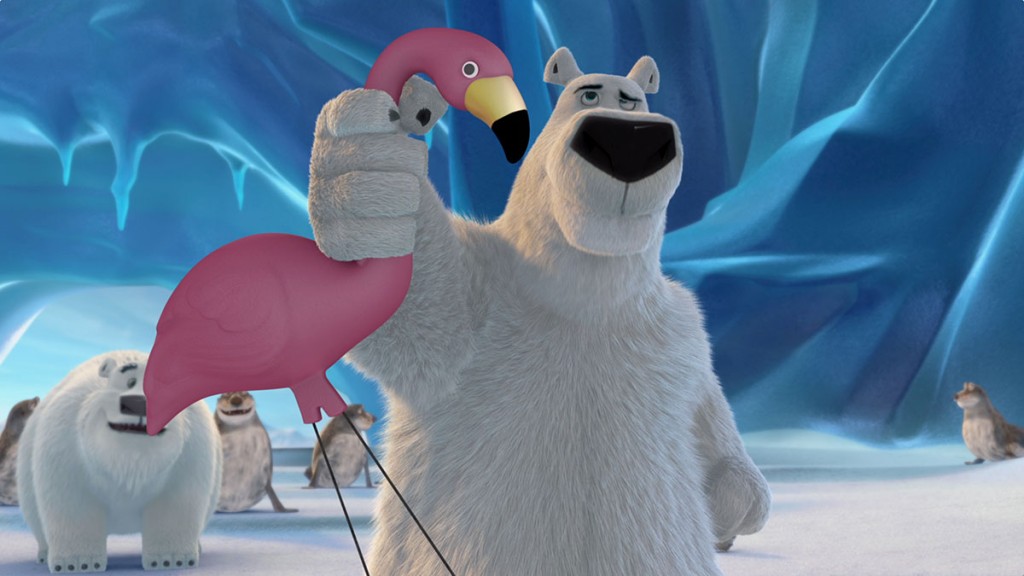 I can’t find any real pictures from them in NYC, just promo art.
But at the same time, look at that background bear and see how terrible it all is.

The director had his button on a fade out button and used it constantly to go between scenes. I was going to vaguely describe an example of it being used improperly, but it hurt my head trying to describe the scene.

I kid you not, my four year old step daughter turned to me twice during the movie and told me this was a bad movie. She didn’t laugh at all. I laughed at a joke that could be misconstrued as a pedophile joke. It also had a decently offensive gay joke, to throw the whole thing more under the bus.

I don’t feel like I am done. There was a love interest. But I didn’t even link her above because she had all of three lines throughout the film and ended up being not important, despite literally marrying her at the end. The final plan of the bad Mr. Greene, which he kept secret, was simply recording Norm talk and changing his words around. And after that happened, Norm basically gave up. “Oh ho, they heard me say something else now. Nothing I can do about it!”

Just. Fuck. This was bad.