This Nine is of course not to be confused with the other 9. As you can see, this is spelled out, and the other is a number. I watched them on the same day. This was a mistake. Not watching them on the same day, but watching this at all. All I knew about this was that it was based off of a musical of the same name, about some other movie (8 1/2, don’t get lost now), and involved the director being with tons of different women. Unfortunately, in my mind it did not translate well from musical to movie of musical.

First off, this film was boring. It has no real way to hook people in who don’t already know the story or the movie its based off of. The songs are few and far between, while not to mention not being too interesting to listen to. It seemed like every character got their own song, and that was it. No real harmony. The main dude is Daniel Day-Lewis, fresh from his role as crazy oil tycoon in There Will Be Blood. 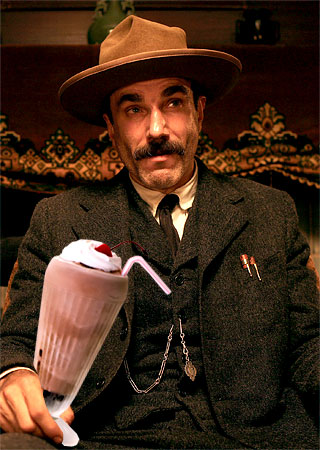 If you weren’t expecting a picture like this after that reference, we can’t be friends.

I could be wrong about not much harmony between singers, because I stopped caring while watching it. I heard a lot of songs didn’t even make it into the movie, including the song called Nine. What the hell? Seems like a poor judgement call. Other singers include Fergie, Nicole Kidman, Kate Hudson, and Penelope Cruz.

This thing is way too artsy, and way too boring for anyone but already lovers of the material to watch.

1 out of 4.
Tags:1 out of 4, Daniel Day-Lewis, Fergie, Kate Hudson, Musical, Nicole Kidman, Nine, Penelope Cruz, There Will Be Blood