Ah, Hollywood has set out to  reintroduce another beloved cartoon franchise for the modern masses! This time it is Mr. Peabody & Sherman, based on Peabody’s Improbable History, a short featured on the original Rocky and Bullwinkle cartoon show.

Which is great. I know they did The Adventures of Rocky and Bullwinkle about fifteen years ago, and it bombed, by why not the short associated with it? In fact, we need more shorts from shows to make it to the big screen. If I had to chose just one, I’d pick Justice Friends from Dexter’s Laboratory. Yes, that would make an excellent film indeed. 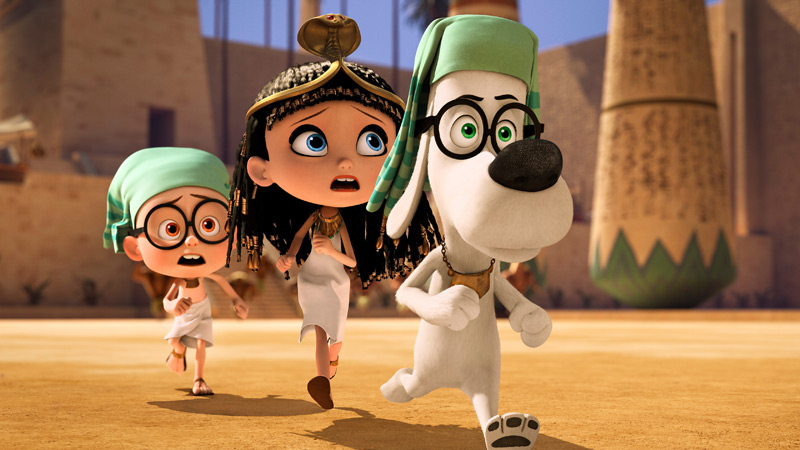 But only live action, like Underdog, another successful cartoon to movie reboot.

But I digress. It is this dog’s day to shine.

Mr. Peabody (Ty Burrell) is the smartest entity in the world and he has invented a lot of things. The one challenge he had left to face was raising a son, however, so as luck would have it, he finds a boy Sherman (Max Charles) to adopt. Mr. Peabody vows to raise the boy right and teach him all about the world!

So he invents the Way Back machine (or “WABAK” but I never saw it written that way in the film) that allows him to travel time and space. Now he can teach him fun historical facts! As long as he doesn’t travel to a time where they already exist, because then there would be two of them which could have catastrophic consequences!

However, at this point, it is time for Sherman’s first day of school ever, which is also apparently first grade. There, he is picked on by a girl bully Penny (Ariel Winter, our second Modern Family cast member) and he bites her! Oh no! A social service lady, Ms. Grunion (Allison Janney) believes it is Mr. Peabody’s fault as a dog cannot properly raise a boy.

With Mr. Peabody’s integrity on the line, he makes a plan to invite Penny and her parents (Stephen Colbert, Leslie Mann) for dinner, to prove that he is a good parent and hopefully reconcile the relationship between Penny and Sherman. Unfortunately, Sherman shows Penny the Way Back and everything falls to pieces. 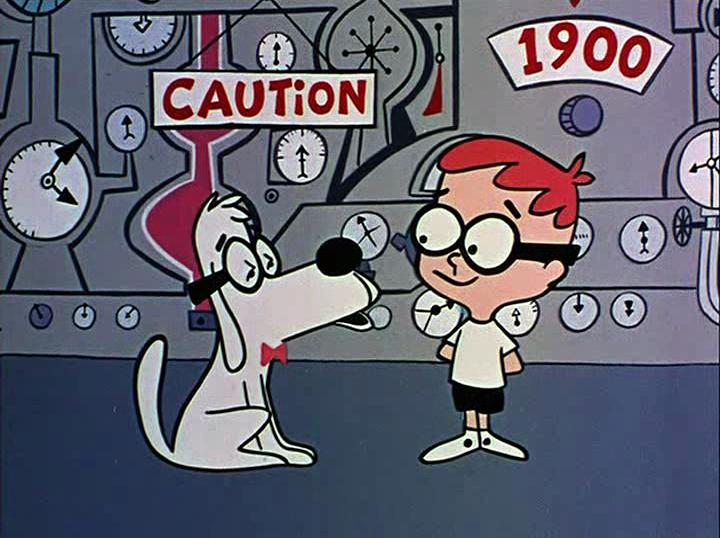 “Now shut up Sherman while I go bang some pre-historic bitches.” Wow, Mr. Peabody used to be a jerk.

Ah yes, a movie about time travel, history, and learning! All with the potential for both kids humor and “smart jokes” without necessarily getting into the “adult joke” territory.

However, if you are going to make a movie involving time travel, you have to be prepared to be judged accordingly, regardless of intent. To me, there were a lot of flaws with the way time travel was presented in this movie. It created paradoxes (outside of the ones shown in the movie) and other bad time no-no’s, but chose to ignore all of them. Bah. It is not too hard to make a sensical time travel movie, this one just failed to do so.

Speaking of nonsense, the ending was a huge mess. Everything was bad, excrement was hitting the proverbial fan, chaos. But they had a plan to solve it! Yeah, it didn’t make any amount of sense, scientifically or otherwise. It worked in the movie and then it ended. Honestly, it felt worse than a deus ex machina. It just made me feel cheated.

Basically, the creators said that if they are going to make stuff up, they might as well go completely made up.

Other than that, this movie did have some enjoyable moments and jokes. There were nice puns everywhere, as a throwback to the original and a few touching scenes. However, the plot they give the movie is under developed and doesn’t even serve as a good excuse for time travel. I think Mr. Peabody & Sherman could have been so much more and easily turned into a huge franchise.

Oh well, at least I got the sweet 3D Glasses Add-On.