I saw probably two trailers for Moonrise Kingdom, with neither of them answering really anything at all. I did know that it was a Wes Anderson movie, of which I have only liked one. But to be fair, I have only seen two…

I am sure someone is reading this review because they heard I disliked Bill Murray and heard I only like him in cameos. Well. I won’t let any perceived actor hatred from giving this movie its full attention and chance to wow me. No fear good sirs. 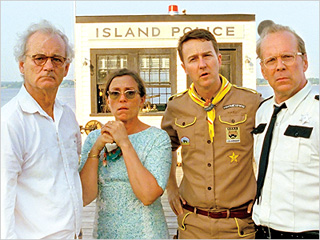 Honestly, I have a hard time trying to explain just what this movie is about. The easiest way is to just explain some of the characters and location.

The setting is in 1965 at a fictional New England island of New Penzance. Pretty small. Nearby is a few other islands too. But small, has a ferry system, and no paved roads.

The first family introduced is the Bishops, Walt (Murray) and Laura (Frances McDormand). They have three young boys, and an older daughter at twelve named Suzy (Kara Hayward). She may be dysfunctional, and likes binoculars.

There is only one police officer for the whole island, Captain Sharp (Bruce Willis) and not the smartest man out there. There is a local camp set up for some Khaki Scouts, lead by Scout Master Ward (Edward Norton), who is a math teacher normally. He runs his camp with authority, and makes sure not too many shenanigans occur. But when it is found out that Sam (Jared Gilman), an orphan kid who no one likes has retired from the Scouts, run away and stolen a canoe, it drives the Island into panic!

Mostly indifference, but still, he can’t have gone that far.

This leads to a grand adventure of love, and longing. Where adults act childish, and children act like adults. Where books are read, and where coves are named. Jason Schwartzman also appears as “Cousin Ben” and Harvey Keitel as Commander Pierce, head of the Khaki Scouts and working on the local Hullabaloo. 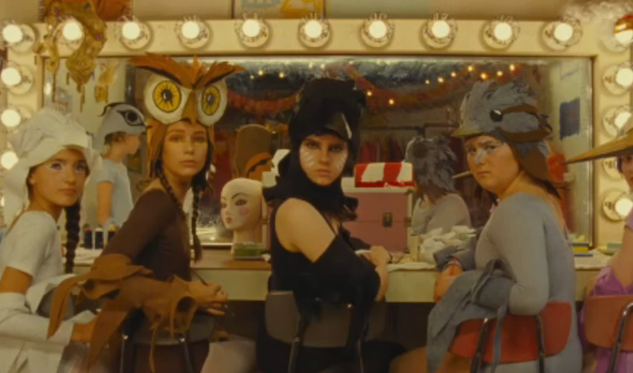 Still don’t know what this movie is about? Bitch, she’s a raven!

Fucking Wes Anderson! How dare he do an amazing movie like this.

Everything felt top notch about this movie. Everything was so weird and I love weird. The music? It was both in your face, and felt appropriate. But the real level of amazing would be the camera work here. Lot of longer scenes where the camera would just move from left to right as people walked, and things happened in the background, and the movie carried on. The color schemes between the scenes, they were noticeable and overpowering, but yet it also added so much to the island of New Penzance.

I can’t even tell if the acting was that good? The main kid performances was full of “awwww”, and I love movies that give me stuff like that. You know, like Flipped.

The movie is really hard to explain, but I really loved it. Was on the edge of my seat for a while. I did find it odd that I was pretty much the only one laughing in my theater of 12-15~ people for most of the jokes. But those guys are just jerks I guess.