There is one major reason why “average people” would want to see Melancholia.

I may be off my rocker declaring this, or pompous, not sure. But come on, that has got to be it.

That is why I wanted to see this movie. Not afraid to say that.

This movie is highly rated and an artsy indie movie. But also Kirsten Dunst is super naked in it. 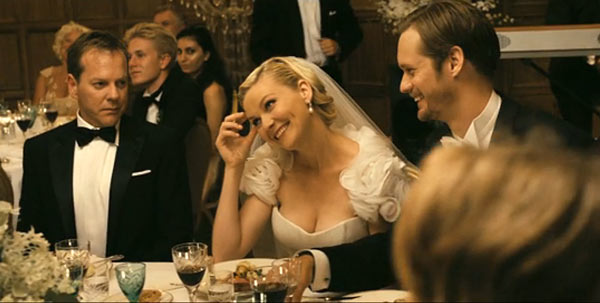 This is not one of those times. But it might as well be.

The movie is split up into two parts and a prologue. The movie begins with Earth getting fucked up and getting hit by a giant planet. Like way bigger than Earth. All the scenes were in super slow motion and confusing me, because I saw the same characters doing different things, when I thought it was supposed to show their last seconds. Nope. The first part is called “Justine” played by Dunst. She is getting married! To Michael (Alexander Skarsgard). They have a big ceremony on a mountain and are late. Limos hate mountains.

It is a weird wedding. Family issues, etc. Dunst is some sort of depressed and her sister, Claire (Charlotte Gainsbourg) is clearly trying to help her out. She is trying super hard to fix it all, but cant. And before her wedding night, she screws some other person and I guess Michael finds out and leaves her. That night. Wooo, take that Kim Kardashian.

The second half is called Claire, for some reason. The planet is getting close to earth, but everyone is saying it will miss the planet. Including Claire’s husband, played by Kiefer Sutherland, an amateur astronomer. But Claire freaks out anyways, and now her sister is living with her, barely able to do anything at all with her depression. She is even looking forward to the collision and hopes it will happen! And we all know it will right? It will miss, but sling shot back around and come fuck everything else up.

Did I spoil it all? Hard to say.

I am kind of mad at the ending. It doesn’t happen at all like the beginning seemed to suggest. Maybe it was a metaphor, the beginning. Or something. I don’t know.

It is a super indie artsy movie and well, maybe it went over my head? If it did I don’t care. It made me not like it. The wedding was all long and sporatic, so I didn’t enjoy watching it. I didn’t understand Dunst’s character. I didn’t even realize her husband was trying to divorce her the same night. Id understand that he was mad since she said she’d be right back before wedding sex, and she took forever. But I don’t see how that is grounds for no longer seeing each other.

Took me awhile to realize what had happened, until it was spelled out for me (yay wikipedia) which I decided to read the first part of the plot summary before the second act.

And uhh yeah. If you want to see Kristen Dunst naked, you have the internet.