About a year and a half ago a local independent rental store was going out of business. Unfortunately I didn’t realize this until the last day, but I was still able to walk away with about twenty movies. Needless to say a lot of them didn’t work.

Including Meet Bill! I was sad. But turns out it does work, and my laptop was just being a little bitch. Good news, everyone! Time for an older review. 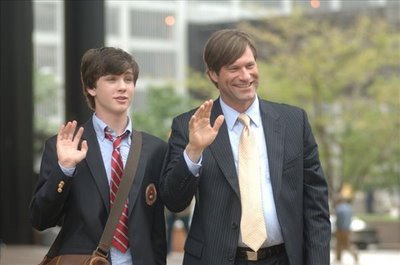 They look so happy too. Finally glad to be noticed.

Bill (Aaron Eckhart) is a loser. He is married to Jess (Elizabeth Banks) and she is hot, but he is kind of lame. Getting out of shape, doing dumb things. He also works for his father in law, in a made up position, so he feels like he doesn’t contribute a thing to society. Thankfully his old private school is starting a mentoring program, where students who are about to graduate get to follow a successful alumni around. And technically Bill is successful.

Well he becomes a bit popular for yelling at a local broadcaster (Timothy Olyphant). WHy? Because his wife was cheating on him, with Tim, and he got it on tape. Doesn’t help that he later assaults him either. Needless to say everyone wants him to be their mentor, but some rich kid (Logan Lerman) wins out, after he already made plans pre anger shenanigans. This kid is also trying to hit on Lucy (Jessica Alba), a worker at a lingerie store, and ends up bringing her along with their sessions.

Needless to say, Bill is going through a mid life crisis, a kind of divorce, and is having to explain to this kid how to be successful. Whoops. Really the only thing he does during this time is think about starting up a “Sweet Sweet” franchise, a donut shop, and has constant arrangements with the owners Jane and Jim Whittmann (Kristen Wiig and Jason Sudeikis). 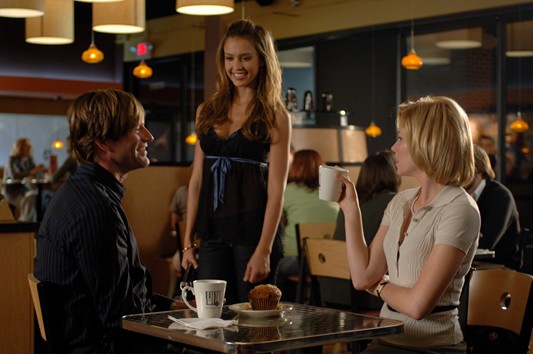 I love explaining the plots, it helps me remember the movie and my own thoughts on it. And this movie is a whole lot about nothing. Mid life crisis, yadda yadda.

But I don’t feel like I gained anything after watching it. While watching it, parts were enjoyable, but mostly just okay. Didn’t even care too much about Bill, and I am supposed to be meeting him, damn it.

Oh well, Aaron Eckhart knows he can’t ever reproduce Thank You For Smoking, but by golly is he going to keep trying.