What makes a Legend? Is it their walk, their background, their story, their Will Smithy-ness?

Or does it involve being a bad ass mofo mobster, enough that one day someone will make a movie about you?

Like, Whitey, he was bad ass, and Johnny Depp played him in Black Mass.

Is your Legend-ness downplayed if you have to share the spotlight with a partner? Obviously it is easier to become famous if you are a duo act, instead of a solo act. And in Legend, our criminals are real life twins. Which means we get one actor playing two people, which is probably one of my favorite things ever in movies. One of those things you just can’t do in a play. 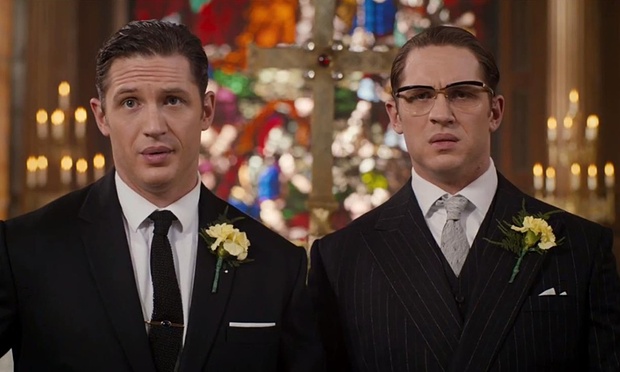 However this picture makes it look like a bad romcom.

Ronald Kray (Tom Hardy) and Reggie Kray (Tom Hardy) are twins and gangsters and running this small town of London. Well, soon. Ronald just got released from a mental hospital, because a psychiatrist said he was sane after some arm twisting, but he is very messed up. He was some level of schizophrenic, and openly homosexual. He liked the truth. He also wore glasses, which is helpful for telling them apart early on. Reggie, no glasses, wasn’t insane, but still a gangster. He just had a good head on his shoulders, could think things through and wanted to maybe, eventually, go clean.

This story, narrated by Frances Shea (Emily Browning), tells of their rise to actually control the London underground, their falling aparts, their separate arrests, and what finally brought them down to justice. Oh, and she is totally dating Reggie, of course. Because he is the cute one.

Nipper Read (Christopher Eccleston) is the main constable trying to bring him down (and Joshua Hill is his side constable). Adam Fogerty plays their muscle, Shane Attwooll some competition, David Thewlis their business partner, and Taron Egerton one of the gay lovers of Ronald. 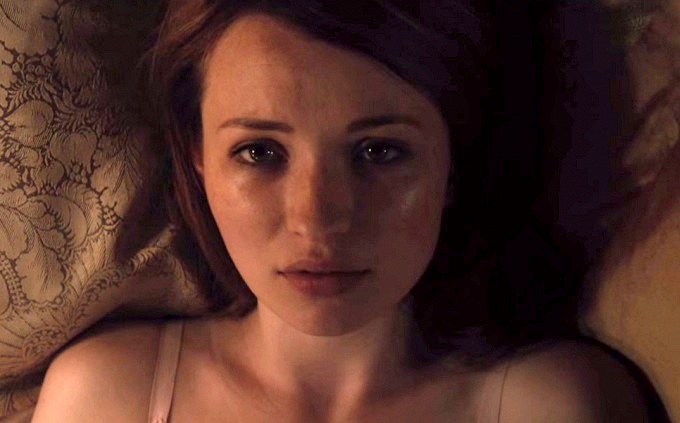 No, don’t cry Emily. Yes you have to kiss a killer Tom Hardy. But at least he isn’t wearing a mask.

If there is one reason I am glad to be writing this review, it is that Legend will serve as a great example for future movie reviews. For quite a few films, I have seen great acting in overall mediocre films, which is sad. But rarely do you see great acting in actually bad movies.

Hardy. Is. Excellent. Twice! The brothers are very unique individuals, they talk differently, they have different mannerisms, and one even wears glasses. I actually hard a hard time believing that Hardy was playing Twins because they started to look nothing alike in my eyes. It is such an amazing show being put on him, especially as he seamlessly argues and fights with himself. This isn’t a dumb Parent Trap situation. This is great fucking shit. I will admit I found them hard to understand 70% of the time and would have loved subtitles, but I will take that as my own fault.

The rest of the film falters, and it does so big time. It is too long, over two hours and seemingly drags. I was sitting in the theater just wondering when they would finally mess up and get caught. Hurry up and lose. The narration from Browning felt unattached from the rest of the film and mostly unnecessary. Giving it from her perspective made it feel Romance instead of a Crime/Drama. And I have to mention the music, which I basically never do in a review. The score sounded as if it was taken from a soap opera or an extremely older film. Jazz is one thing, but the music was always painfully obvious and distracting, never helping the scenes out.

This is bad that the acting from Hardy was so good but the rest of the film is meh. Most of you will watch this movie, solely for the fact that Hardy is in it. And you know what? Do that. Watch that man do his best. Watch him work. And then forget the rest.