Hoover. Sorry, had to rush that one out of there. The title of this movie teases you. You want it to be called J. Edgar Hoover, because that is how he was known. It is hard to stop the name at just J. Edgar, just like it is hard to stop a stream mid-piss. 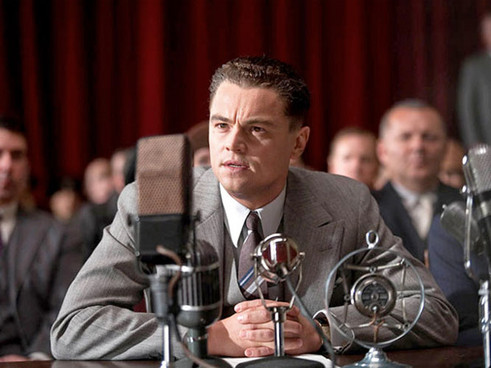 As you know, the movie J. Edgar is a biographical movie about the life of J. Edgar Hoover (played by Leonardo DiCaprio, because that guy loves period pieces), directed by Clint Eastwood.

Plotwise well, it is about J. Edgar, the starting of the FBI, how he got his start, important points in his career, his budding relationships, and his death.

Uhh yeah. Sorry. Spoils if you didn’t know he dies at the end.

You sure do learn a lot about him though, assuming you had no real detailed knowledge about his life. Did you know he helped revolutionize the crime scene? Had people stop just messing shit up, start to wear gloves, and invented the idea of having fingerprints on file. He also tried to keep up to date on all the new sciences in order to stay ahead of crime (but that goes with the territory of finger printing). He also may have been gay?

He also apparently was bad with the ladies. He tried to marry Helen Gandy (Naomi Watts) who instead became his personal secretary for life (And is probably responsible for destroying all of his secret documents post death). But after that he hired Clyde Tolson (Armie Hammer), someone very unqualified for whatever Lawyer job, and he eventually became Hoover’s number two man of the FBI. They ate together, vacationed together, and did everything together. It was more than implied in the movie that they might have had something going on.

But that is about it. There was the main story in his dealing with the Charles Lindbergh case, his dealings with many presidents (including almost president Robert Kennedy, played by Jeffrey Donovan) and Martin Luther King Jr. 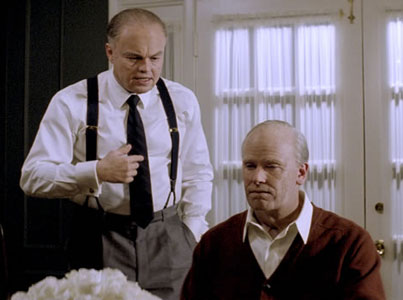 Here is Tolson and Hoover, both old, both played by the same actors above with make up, and both clearly hot for each other.

Now I could sit here and talk all day about what I learned about Hoover and tell you all about it but that ruins the movie. I also lied, no way I could talk all day. All I know about him is a 130 minute movie. Hell, this could have all been lies and I wouldn’t know. There is surely enough obvious “guesses” in the movie for you to realize that yourself.

But damn it, the acting is good. And the stories are interesting! The stuff is told out of order, flowing between different points in history. Thankfully it isn’t that hard to follow, like other movies. Just have to figure out how old DiCaprio (and Hammer) looks and go from there.

Hoover is one of the more awesome characters in American history and of the 1900s, and he wasn’t a president. Its hard to make the history books like that.