They are a very polarizing. For the most part, they will never really be scientifically accurate. They also have been getting further and further into B-Movie territory, thanks to The Asylum and SyFy making intentionally shitty disaster flicks. But for the most part, it is has been awhile since an actual disaster movie has been released.

Before Into The Storm, maybe 2012 was the last one? At least natural disasters based on natural occurrences. None of that zombie disaster movie shit. Just straight up angry weather and earth.

I will admit, for the pre-screening of Into The Storm, they did throw a little party together. Free food (and it was good), drinks (alcohol too), a lot of prizes for tweeting things, and a “4D” experience. Basically, they had a 2 minute scene from the movie turned into a video game thing, hooked up to an Oculus Rift, with fans blowing hard at you. And honestly, that was really cool. I would like to think this event didn’t effect my bias any, but throwing it out there just in case. And here is me looking cool in the booth. 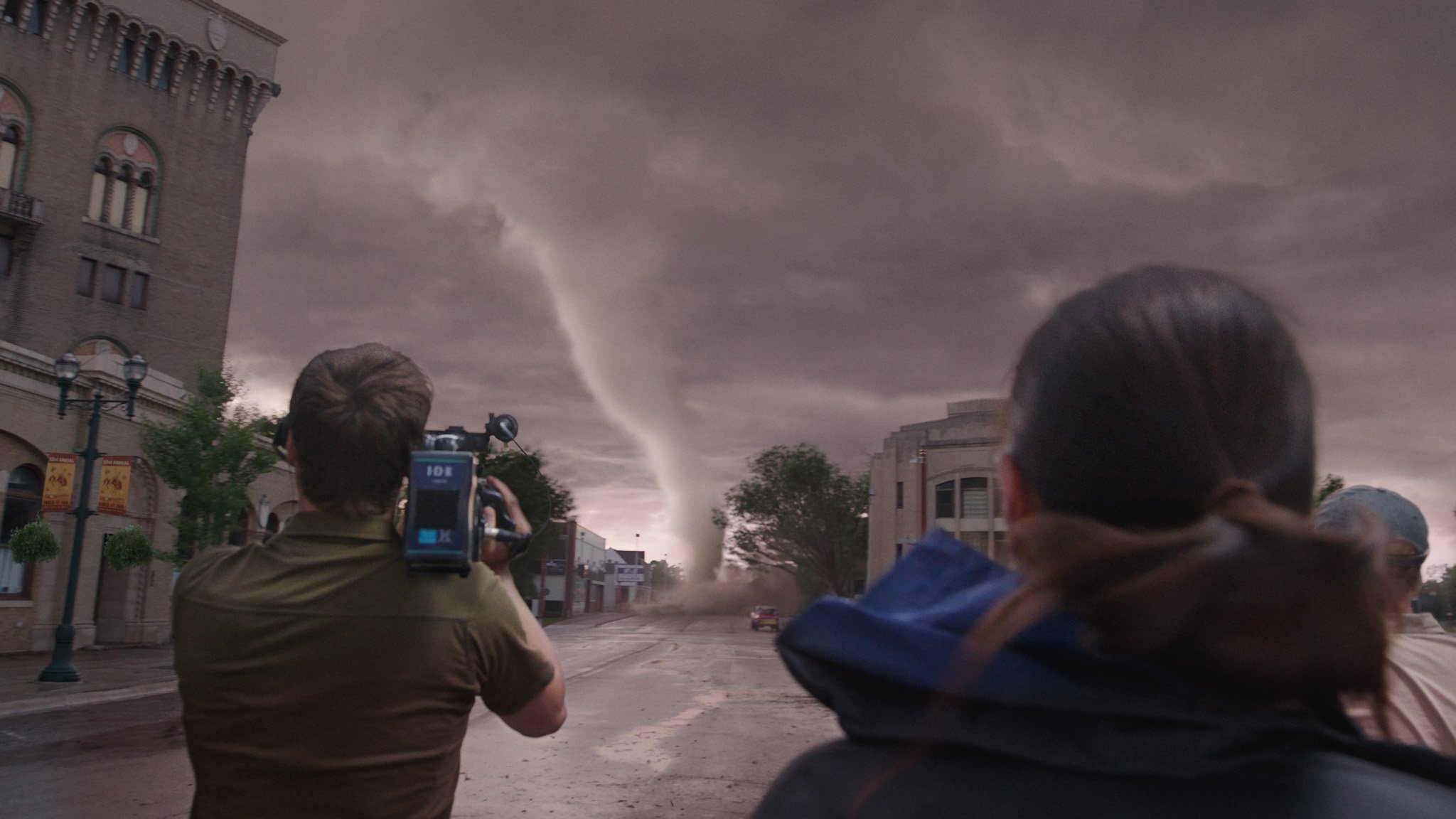 I need some sort of sucks joke here. Scott, don’t forget to put a joke here.

Silverton, Oklahoma. A nice place to visit, but I wouldn’t want to live there. Not just because of what happens to it in this movie, but because it’s a made up town and I don’t want to live in LA-LA land.

On this tragic almost end of Tornado season, a high school graduation is taking place! This doesn’t effect our main family too much, in that the boys are in Junior and Sophomore years. Donnie (Max Deacon) is our closest thing to a main character, so let’s start with him. He is shy and nerdy, likes a girl Kaitlyn (Alycia Debnam Carey). Kaitlyn is freaking out about an internship, her video for it is corrupted, so she has to reshoot it TODAY. Donnie is supposed to record it with his brother Trey (Nathan Kress), because their dad is the vice principal (Richard Armitage). But hey, he has a chance to help a hot girl out. So hell yeah, abandoned old factory time.

We also have storm chasers!

Led by Pete (Matt Walsh), a storm documentary guy who has gone almost all season without a single tornado. Pete has made a tank on wheels, bulletproof glass, steel plating, braces that can help stabilize the vehicle up to 170 mph winds, and a 360 turret camera. His goal is to record the inside of a tornado. But his hired meteorologist, Allison (Sarah Wayne Callies) has been miss after miss. They have lost their funding, but he is willing to try one more. There are two storm fronts that seemed to have merged and Allison’s gut is telling her Silverton. They also have camera crew people / helpers with various personalities (Arlen Escarpeta, Jeremy Sumpter, Lee Whittaker).

But that isn’t enough comedy, damn it. So we have two local rednecks, one a self proclaimed dare devil (Kyle Davis) and his brother who forced that title upon him (Jon Reep). Yes I know what I just said. Fuck danger, they are going to be famous on YouTube. 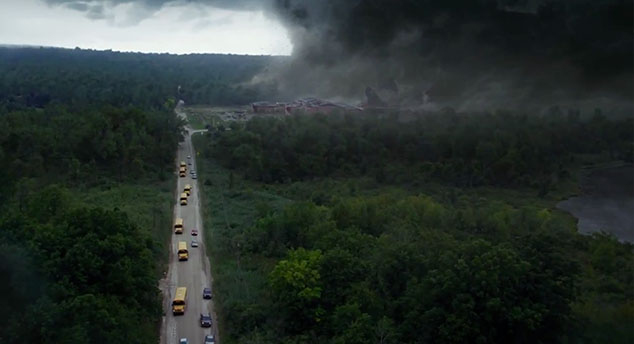 “Johnson! How are we going to make this tornado movie more threatening?”
“I don’t know, make a tornado 1000x its normal size?”

Notice how I didn’t really mention that tornadoes fuck up some shit? Mostly because that is obvious. Figured telling you the plot, because this movie surprisingly has plot, would be way more informative.

I will say that I don’t think the type of things that happened in this film are scientifically accurate at all, but then again, I don’t study bitchy weather. If there had to be one big issue with the movie it is that it is rated PG-13. With that rating, the death count ended up being a lot smaller than one would expect. Now there were some pretty awesome and well shown deaths, don’t worry on that. Just. The number was small.

The film is also highly entertaining. Only about 90 minutes in length, but for the most part it is action packed. Outside of character introductions early on, and one particular touching moment from Max and Alycia mid movie (which yes, I might have shed a tear for), there was always some sort of panic/danger/tornado to cause some thrills and drama. And what more can I want from a disaster movie?

I will note that Richard Armitage is supposed to be a 65 year old man in this movie. What? He looks like he is 40 at most. Regardless, his career path is terrible if he is still just some high school VP.

Here is an additional note. A lot of people seem to complain about this style of film. Hand cameras and what not filming the entirety of the scenes. However, just because a movie is filmed that way does not make it Found Footage. Complaining that the footage is never found our pieced together afterwards is stupid, if the movie never claims to be a found footage movie. It is just a different style of film making that can be incredibly unique. Remember that.