Oh hey look, a young adult book about death getting turned into a movie!

When I first saw the trailer to If I Stay, I had two thoughts.

2) Holy shit, did I just watch the entire movie?

That is how I feel after seeing only two minutes. Because in the trailer I got a beginning and a middle and a whole lot of other stuff. The only thing I don’t have is the very end. That is a lot of movie it seems to have spoiled. Unless the event we see takes place like, 20 minutes into the movie, I think I got the entire gist of it already. Fuck you, trailer makers. 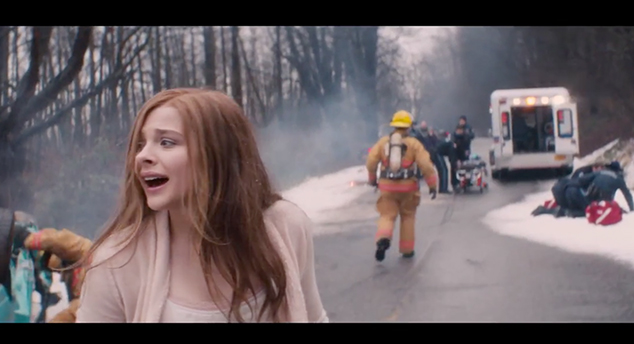 Hell, I can even draw a bunch of similarities to the Carrie remake.

Mia’s (Chloe Grace Moretz) life is about to get turned on its head. You know. Because of a car crash. Icy roads can be deadly, especially when two cars crash into each other on them.

Mia finds herself outside of her body, watching the ambulance crew work, a car on fire, people running around. Shit. Is she dead? Is she dying? What in the flying fuck is going on?

Well, since we are here, might as well flash back to the last few years of her life. Finding out how her parents (Mireille Enos, Joshua Leonard) changed since she was a young girl. How they became responsible adults when her younger brother Teddy (Jakob Davies) was born.

And of course, her first and only real love. The sweet rocker Adam (Jamie Blackley), who played the guitar and sang in a band, while Mia is a solo cellist! He likes the punk scene, she likes books and not the punk scene! He likes being alive and she is, well, you know.

With her family all banged up, her relationship in maybe turmoil, and her future uncertain, does she even have a reason to fight back out of the coma?

Also Liana Liberato as her best friend and Stacy Keach and Gabrielle Rose as her grandparents.

Finally. Finalllyyyyy. This is the moment I live for. Seeing a movie that, for all intents and purposes, looks terrible to me from the trailers. And then it being great.

Okay, more than that I love finding a random movie no one has heard of that ends up being amazing. But this is the second main reason I watch all the movies. I never know what might actually be good or bad and finding the good is wonderful.

I thought If I Stay was surprisingly spectacular. Not like, best movie ever spectacular, but really emotional at least. It jerks. It tear jerks hard.

The parents may be the cutest/funniest parents of a high school movie since Easy A. Chloe did really great as the lead role. Jamie Blackley, as the boyfriend, was also surprisingly great. He is one of the main concerns I had after seeing the trailer. But he pulled it off and didn’t look 30 the whole movie.

The movie is told mostly through flashbacks, which explains how the entirety wasn’t spoiled by trailers. After all, most of the trailer events would have had to happen before crash. And they do! Just not before the crash in the film. Still, it does show case a lot more of the cuter moments I would have liked to experience. The ending might surprise some people, but I loved how it ended, giving us everything we needed to know.

If I Stay is the kind of movie I would gladly buy in the future and suggest it for a nice romance cry night in the future. I heard there was a sequel book and when I heard the plot it pissed me off. Do not do a sequel to this movie. It would be shit. Please. Please listen movie makers. Don’t do it.