Ice Age Fucking 4: Continental Fucking Draft. Much like Madagascar movies, I had to watch a few of these films real quick before seeing the latest installment. I saw the first one a long time ago, but 2 and 3 I never really go to, because I never really liked the first one. Might have just been old bitter teenager phase though, so might rewatch it as well.

Either way. I have been up to my neck in these guys this last weekend, so lets just get straight to it! 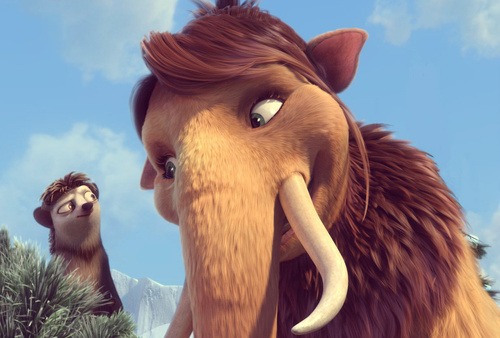 Marathoning these things could explain why I find the teenage girl Mammoth Peaches strangely attractive.

Manny (Ray Romano) the mammoth, is living the good life. With the help of his “half opossom” wife Ellie (Queen Latifah), he is busy raising his ~teenage daughter Peaches (Keke Palmer). Diego (Denis Leary) the sabretooth is still kicking ass, kind of lonely. And Sid (John Leguizamo) the sloth is still crazy. But at least his family came to visit! Just to drop off his grandma (Wanda Sykes) who is also ‘crazy’.

OH WHAT THE FUCK THE GROUND STARTS TO BREAK APART AND THE SHIT IS HITTING THE FAN. Sid, Diego, Manny, and Grandma Sloth find themselves on a small ice chip floating down the sea, with plans on reaching the rest of the herd at the ‘land bridge’.

They have to get there while being chased by a (geologically quick as fuck) slowly moving massive wall, that uhh, represents something. Peaches wants to fit in with the other teen mammoths, especially cute Ethan (Drake). But he has nasty ass ho friends (Heather Morris, Nicki Minaj), and they all hate other things. So she might have to disown her best friend a molehog named Louis (Josh Gad) to do it, but hey, whatever. I’m sure he will understand.

Back on the crazy ass main adventure, uhh after giant storms, they run into pirates. Because why the fuck not.

Captain Gutt (Peter Dinklage…!) an ape like creature, named for his tendency to rip open animals from their gut to their neck, wants the sabretooth and mammoth to join his crew (on a floating ice, yes). That is how his crew was formed, saving animals mostly, and them wanting to work for him. There is a song and everything. It includes Shira (Jennifer Lopez), a white female sabretooth tiger (yes that means exactly what you think it does). Some sort of bunny (Aziz Ansari), a kangaroo (Rebel Wilson), a large Sea Lion (Nick Frost) and many other smaller critters.

So their big plan involves escaping from them (At every corner), trying to figure out how to get back home to save their families and friends from certain doom. How they’d save them once they get back? Who knows, thinking ahead is for lame people. 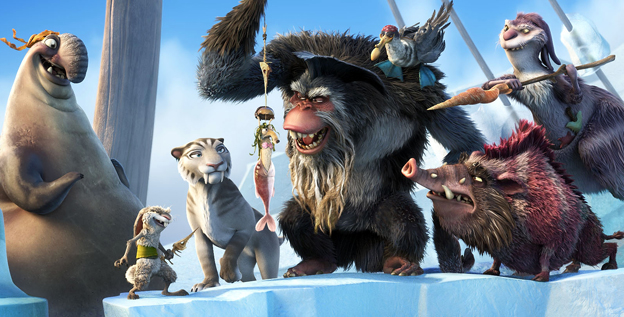 Ugh. So uhh, first off, as you may have guessed, this movie is full of bad science. “But it is a kids movie…!” Get that excuse out of my face. That seems to be the go to response when filmmakers would rather be lazy and make a poor movie with little to no value. That is sad though, because the original Ice Age had tons of science facts on their side. It actually took place when there were Mammoths and Sabretooth Tigers and even Humans. Sure, during an ice age too. That was around 18,000 BCE. Well, this movie is arguably a few years later than the first, with the birth and growing up of the mammoth baby. But yet Pangea splits apart in it? Something that began 200 million years ago, but instead is represented as something 20k years ago? That is a few magnitudes off, fuck that shit.

It is a popular notion in education. Get an idea in their head, and every few years, fix it a bit for them until it is actually correct. But why not just always be correct? You know, so the kids don’t feel lied too?

Either way, this movie had WAYYYY too many characters. I left out some pretty big names, because small roles because I was just tired of adding more.

It also did bad on its own self pacing. Would show a few days in time with the main cast, then 5s with the rest of the families. Their story lines being mostly one of a normal middle school drama that we’ve all seen before, and happens the same way every time. I guess they took a cue from Madagascar and decided to get in on that interspecies lovin’.

I’d say the CGI was better than the previous ones finally, but most of it was just ridiculous ice boats floating on random storms and water. And narhwals.