When you think of Hostiles, you think of a group of angry people. Knowing that this movie is set as a western, with cowboys and American Indians, it sort of brings Pocahontas to mind. I know, it wasn’t cowboys, but close enough. And famously in that movie we had the song Savages. Throughout history, generally Savage was used when the “white” side ran into natives in another land. But in this song, they both saw each other as savages! Equality because both sides were different and didn’t trust different things.

Except you know, the part where in Pocahontas, the white people were actual terrible invaders and the bad people and that was it. So they tried well, but still failed in that regard.

Anyway, I think of that song when I hear Hostiles (and probably also for the movie Savages). Going into it, I assumed that every side and every new character was probably a “hostile” individual, and that no one should be trusted or given a gun. 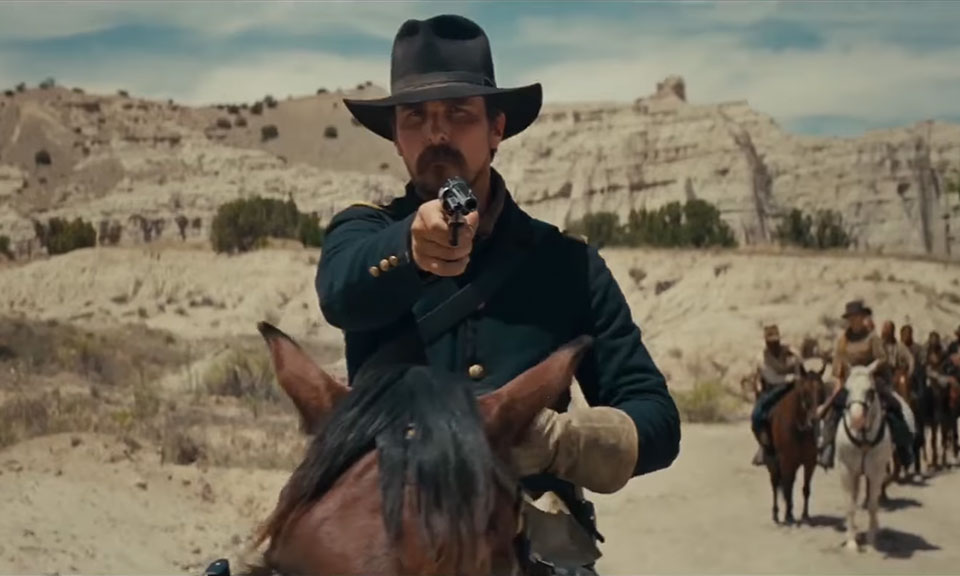 When everyone is this aggressive, you just need to have the gun out at all times.

Set in 1892, we find ourselves in the Western United States. The Civil War is over, but the Spanish-American war had not yet happened. Soldiers at this point didn’t have a lot of responsibilties. Mostly keeping the peace, in forts across the country.

Captain Joseph J. Blocker (Christian Bale) has been in the army for about 25 or more years at this point. He has seen and done a lot of things. He was at Wounded Knee not to much longer before. And he hates the Native Americans. He h as seen what they have done to “honest, Americans” and is disgusted by that fact. Hell, most of his career has involved killing them or rounding them up, but he also has only done what he is told.

And now he is being told to do something unthinkable. He has to return Chief Yellow Hawk (Wes Studi) and his family (Adam Beach, Q’orianka Kilcher, and more) to their homeland. He has been imprisoned for seven years and it has been long enough, especially since Yellow Hawk has the cancer. It has turned into a big deal for their government to send him home to die with his people and forgive past crimes, hell, even the president has signed off on it. The press are involved!

Blocker doesn’t wan this job. And it will be his last one before retirement. He has his crew (Jesse Plemons, Jonathan Majors, Rory Cochrane, Timothée Chalamet), he had his weapons and supplies, and he had a terrible mission.

And along the way he will also pick up Rosalie Quaid (Rosamund Pike) a very recent widow who lost her family and house to a group of Native American horse thieves, and (Ben Foster) a former soldier, turned prisoner for doing unthinkable crimes and trying to run, who needs delivery to a fort for a court marshal.

Shit, everyone gets a gun in this movie.

Hostiles is a film that is just a little bit over two hours, but one that feels much longer. The first scene grabs you and the film refuses to let go the entire time. It keeps your attention by gripping characters, extremely great acting, authentic everything, and slightly terrifying plot.

It doesn’t keep your interest like a modern cartoon, by flashing shit at you every few seconds. No, the scenes are long, detailed, and showcase real human emotion. Hard decisions don’t just come naturally, but they are often decided in between scenes. But in this film, we have to watch actors think through their moral issues and figure out what they need to do. And on its own, that might not seem too appealing, but it just shows the amount of attention to detail that went into this film.

Scott Cooper directed this film and I will be honest, I haven’t really enjoyed anything he has directed before. That is from Black Mass, Out of the Furnace, and Crazy Heart. All films that are known for one reason or another, some good, some not so good. But none of them really reached me.

Hostiles reached me something fierce. Bale has a good chance of getting nominated. Watching Pike play such an unhinged character gave me flashbacks to Gone Girl, she does such work here as well. All of the other side characters are clearly their own individuals. The film kept me guessing with just how scenes would play out. The characters are complex individuals, so their actions won’t always be obvious from earlier in the film.

Hostiles is just a great film on all fronts. The soundtrack, the acting, the story, the pacing, the cinematography, shit, even the costumes. Westerns are rare, but it seems like every western we get is basically gold at this point.