Back in the day, the early 2000s, The Amazing Race was a great reality show. Us couch potato heads got to live vicariously through teams as they traveled across the globe, from the USA to the USA, competing in local culture based challenges. Then, like most reality shows, it started to get really shitty. They added to many new things to it and the focus was no longer on awesome culture challenges, but really just fucking with your competitors.

But hey, there were other nature/foreign race things out there. I mean, there was a whole season of Cannonball Run on USA! And there was one season of something called Eco-Challenge!

Alright, maybe no real shows other than The Amazing Race exist. Whatever. There are still tons of races around the world that exist for the same purpose, they just don’t normally get put on TV. Take for instance, the Rickshaw Challenge Mumbai Xpress! It is a 12 day challenge of nearly 2,000 km (1250 miles) across a lot of India. Sure, that doesn’t sound like a lot, but when you are traveling in a tiny rickshaw, which can’t go very fast. Well, it is something else.

Hit The Road: India is a documentary of two friends who decide to record their journey. For the lols, I guess. 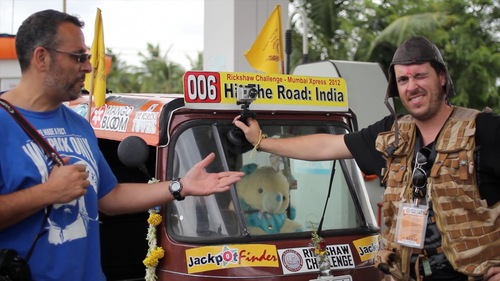 Also for all the Shaws and all the Ricks of the world.

The two friends, Ric Gazarian and Keith King know close to nothing about rickshaws, but just want an adventure. Needless to say, things don’t go terribly well for the couple. They don’t use maps, they don’t speak the language, and they care more about sweet tunes than winning. On the plus side, the music selection for the documentary is one of the best parts. Great and diverse amount of songs.

On the other upside, the camera work was also quite excellent. Often times, I am disappointed with how shitty the guy holding the camera is when a documentary is going. Yes, good information is important. So is a compelling argument. But there is still room for amazing scenes, which the documentary produces both while driving down windy Indian roads and of the landscape in general.

Unfortunately, that is where the praise ends. The two leads are regular average folk, which means they are like me, which means they also aren’t that entertaining. The documentary rushes through a few days, making sure we get scenes, but a lot of it isn’t interesting. What is interesting is their numerous rickshaw/car problems, their late night or rain driving, and their few and far between moments of success. But the editing job doesn’t seem to mind what is boring and what is exciting. What we may get is a more truthful account, but overall it isn’t at all exciting.

But hey, if you like some cool scenes, the documentary is only 80 minutes long, so it can bet quickly watched and then later forgotten.