Harry Potter is Daniel Radcliff, Ron Weasley is Rupert Grint, and Hermoine is Emma Watson. There are some other people, but who cares after the main three. The goal of the series was to have all the actors play the same role for all 7 (At the time, but now 8 ) movies! Lets see how that worked out. 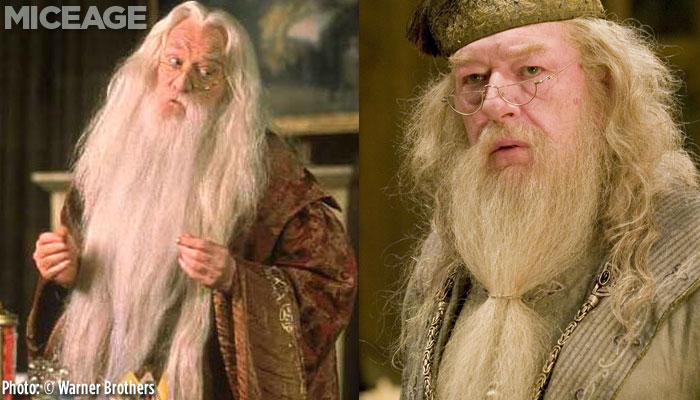 Harry Potter and the Sorcerer’s Stone

This first movie is very very simple. It has to get you caught up on the backstory (or origin), who the bad guys are, how the world works, etc. So you can consider this movie to be like the first movie of a superhero series, if it makes it easier. Like all good superheros, Harry Potter also lost his parents at an early age. While most superheroes still find themselves in a good situation, loving family, Harry gets the short end of the stick and has to live in an abusive house. The people in the house are the only real non magic users we learn about in this series, so I kinda just have to assume all British people are like that. 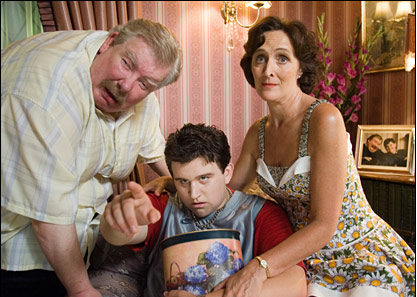 Blah blah. Big scary hairy guy tells him he is special. Steals him to a witch school (where no Muggles are allowed. Hmm. Seems kind of racist. Flaw in the series? I’m not saying Muggles and Wizards are different races. But the people in the movie do. Really, to compare it to superheroes, they are like Mutants. Since two non-mutants can still make a mutant baby.

At mutant orphan school, he is picked on by Alan Rickman, is talked about behind is back, and learns to do magic. Like normal middle/high school. Some gay old man takes a special interest in him, and the rest is history.

Oh yeah. And some guy with another dude on his head tries to kill him through a series of weird games and three headed dogs to get to a stone that lets people live forever. That part was just weird though.

Really, this just looks like some sort of artsy statue.

Harry Potter and the Chamber of Secrets

Year 2! Life at home still sucks. School doesn’t. Turns out homeboy can talk to Snakes. That’d be amazing to me, you know, if these same people weren’t also flying around, shooting off spells and shit.

Some famous book guy replaces guy with two heads who tried to kill Harry as a teacher, and he also is inept at the job. Also, people are dying. Giant Basilisk in sewers? Oh no, evil dude who is dead kinda went to school here, had a diary (hah…) and tricked Harry! Don’t worry. The diary dies by the end, and all the kids are no longer stone.

What is going on here? Is he looking away so he doesn’t become stone? Why doesn’t the basilisk just bite him?

Harry Potter and the Prisoner of Azkaban

Oh. And shit. Dangerous criminals escaped from Prison. That sucks. More magic learning, more hall sneaking, more no good doing. Also, time travel. They got everything under the sun pretty much in this movie. Even that Dumbledore guy seemed confused by it all. HEY WAIT. 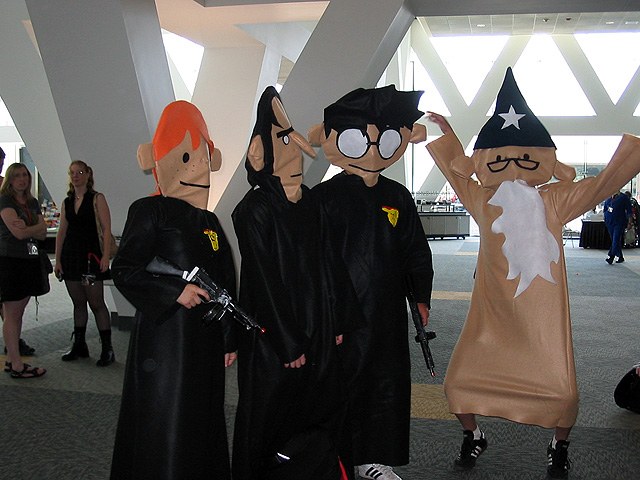 Richards Harris died before the third of eight movies! All of their plans, ruined! Guess they shouldn’t have picked such an old actor for such a long project. Oh well, enter Michael Gambon.

I can’t even remember if Voldermort is in this movie. I know it has animal rights stuff. But I think this one just has his lackies.

Oh yeah, and the escaped convict is Gary Oldman, not actually a murderer, and Harry’s godfather. So his last remaining “family” even though that word is a big stretch still.

Why so serious, Black? This works because Oldman is in the Batman movies too.

So, I know they wanted authentic purposes. But I find the kids in the first movie to now just be creepy, based on their age. The first movie, when compared to the others kind of moves at a lot slower pace. Afterall, its the origin movie. With everything getting explained, it might bore future watchings. The second movie I usually just call a continuation of the first. Still a bunch of little kids. Still a bunch of explaining.

The third movie I think is the first to take on its own complete story and tell it well. It is interesting, and all of the components are interesting too, not confusing. Confusing is an easy adjective to give to movies dealing with any form of time travel too, so that is a great thing to pull off.

Obviously I remember the least from the second movie so it must not have had much of lasting impression on me, right?