I actually thought Goon would be pretty stupid though. (Another thought that biased this review). But I mean, its a hockey movie. Of course I am going to watch it. It is “based on true events” too, apparently, or at least the life of Doug Smith. For those that don’t know, a “Goon” on a hockey team is a player who doesn’t play much, is there to protect the star players, and fight when necessary. Often considered to be the worst kind of role, and one that is being mostly phased out by players who can actually skate and score. 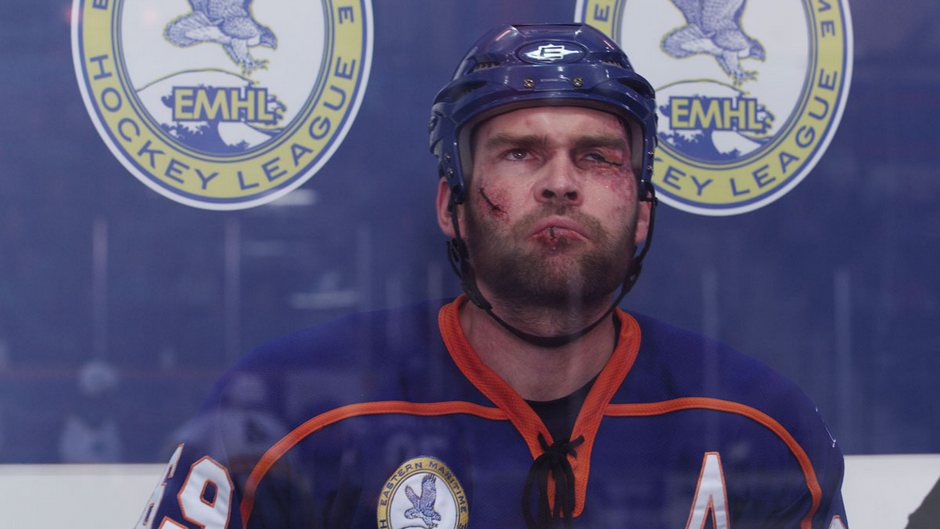 Also it comes with the possibility for injuries.

Doug Glatt (Seann William Scott) is a bouncer, and not a very smart man. His family is, and his brother is gay! But at a local hockey game, when him and his friend (Jay Baruchel, radio talk show host) are harassing a guy who just went to the penalty box, the guy gets mad and comes into the audience to fight back. When Glatt punches him out, he makes local headlines, and even gets a call from the minor team coach (Kim Coates) to come for a tryout.

Because he can kick some ass, and not feel too much pain, he gets a spot. Skating can come later. After all, the team at that point is 1-9 in the season. So why not? Well his first game he kicks some guys ass. Then the next game. But he makes some mistakes like not returning to the bench and letting the other team score. But he is trying hard and a nice guy.

On the team they also have veteran captain who is only good for pre game speeches (Richard Clarkin), the talented should be NHLer who got concussed and has never been the same (Marc-Andre Grondin). Eventually Glatt learns to skate and play better, becoming the heart of his team as they try and make the playoffs.

Also theres the plot of him finding “True love” with Alison Pill, who sleeps around a lot and is terrible for him, but he really likes. Not to mention the actual “tough guy” in their sport, who is retiring soon, and he probably will have to fight in the last game of the season, Ross Rhea (Liev Schrieber). 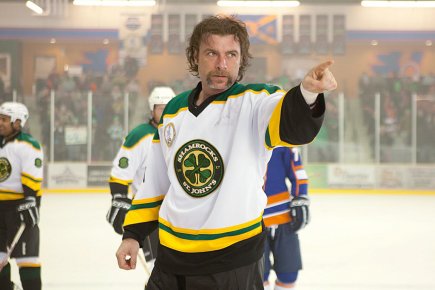 You don’t want to fuck with someone with that sort of facial hair.

Turns out, I really loved this movie. It was funny when it needed to be. But even more so it was kind of sweet, and mostly intense.

Every time he was on the ice, something crazy was going to happen. Whether it be a fight, a bad play, an unlikely goal, what have you. There was a good chance SOMEONE was about to be in a lot of pain, most notably the last two games he played in the movie. I cringed and yelled at what occurred, even covering my face, but I was loving it at the same time.

Sean William Scott is used to playing various levels of the “idiot” role, and I first noted that they weren’t at all identical in the movie American Loser. Well this is definitely another layer of that. Because this character is no where close to being an asshole, and it is easy to see how most people would love to just know a person like him, loyal and shit. Willing to punch someone else in the face for you. Almost like a bit of Forrest Gump, if you know, Forrest Gump was just a bit more violent.