Let’s get one thing straight. No one will take this review seriously. No one can take any review for Ghostbusters seriously. For the last 1-2 years, this film has been dragged through the mud of the internet. From director, to casting choices, to posters, to trailers. Everything has been heavily scrutinized and a lot of it met with extreme backlash.

Like it or not, biases exist in so many forms they are possible to escape. Even when I try and watch a movie by ignoring the trailers, ignoring plot summaries and more, I am still slightly affected by it by recognizing people in the cast and comparing it to their own past work. And that is a subtle bias. When you hear nothing but negative things about something for a long time it will take a toll on you.

What I am NOT saying is that the toll will be the same way to everyone. But extremes will happen and are bound to happen. People very well may end up actually hating this movie, but if they dislike it, they will be called sexist or misogynists or probably Moonboy for all I know. If you love the film, you will be seen as maybe some social justice warrior, liking it to high levels just as a counter to the hate. And both of these things are potentially true. Some people hate it for sexism, some people love it to counter the sexism. But also some people just won’t like it and some people will love it regardless of either.

This intro I wrote before seeing the review, but of course you can already see my rating. So when I say no one will take this seriously, I just mean that it is impossible for anything anyone says about this film to be taken with a grain of salt, outside of actual personal experiences and opinions. 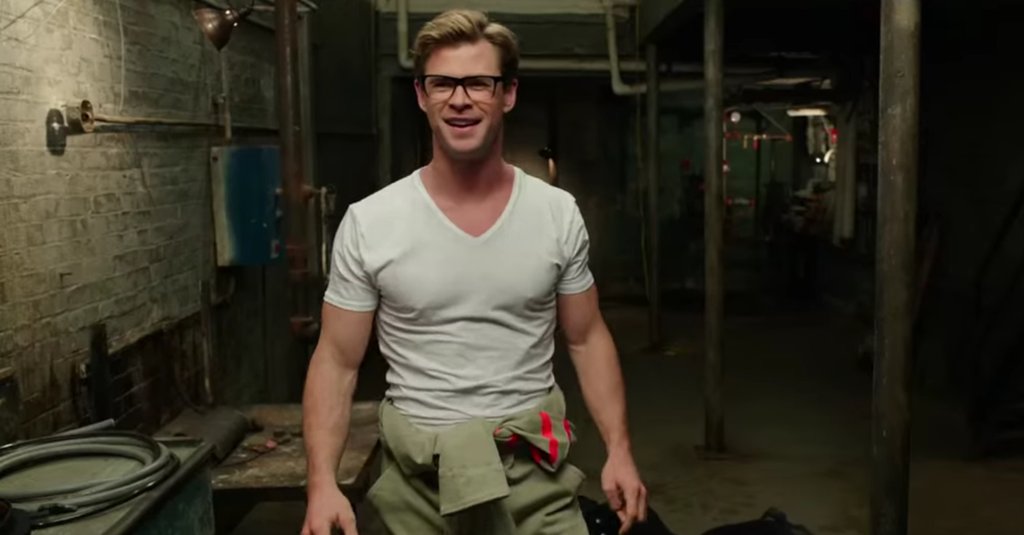 Am I sexist if I make my first picture of just him with no one else?

The year is current year, and Erin Gilbert (Kristen Wiig) is up for tenure at Columbia university now for some hardcore physics stuff. She has to be careful to not embarrass the university in any way. So when Ed Mulgrave (Ed Begley Jr.) pops up to talk about a book she wrote a long time ago about Ghosts, things get awkward. Her co-author, Abby Yates (Melissa McCarthy) is working at much lesser university on paranormal related sciences and she put their book on Amazon to make some extra income. She is now working with an engineer, Jillian Holtzmann (Kate McKinnon) and they are developing some sweet new technology.

Once they find out that Mulgrave runs an old museum/house with a potential ghost, they hop over to find out, and yep, there is a ghost! Their video goes viral on YouTube, Erin loses her job and they decide to start researching these ghosts full time. They soon meet another scarier ghost in the Subway, where they also meet Patty Tolan (Leslie Jones). Patty isn’t a scientist, but she offers them a vehicle so they let her join the train. They also get a receptionist, Kevin (Chris Hemsworth), who is really damn stupid but good looking and the only one to apply.

Long story short, this asshole unsocial dude, Rowan North (Neil Casey), is using his own devices to ramp up paranormal activity in the area, hoping to unleash a huge amount of ghosts to begin the apocalypse. Fun!

Also featuring Andy Garcia as the Mayor of NYC and Cecily Strong as his assistant, Michael Kenneth Williams and Matt Walsh as members of Homeland Security, Zach Woods as a tour guide, Karan Soni as a Chinese food delivery man, and all* of the original Ghostbusters cast as cameos. The biggest cameo is Bill Murray as a ghost skeptic. 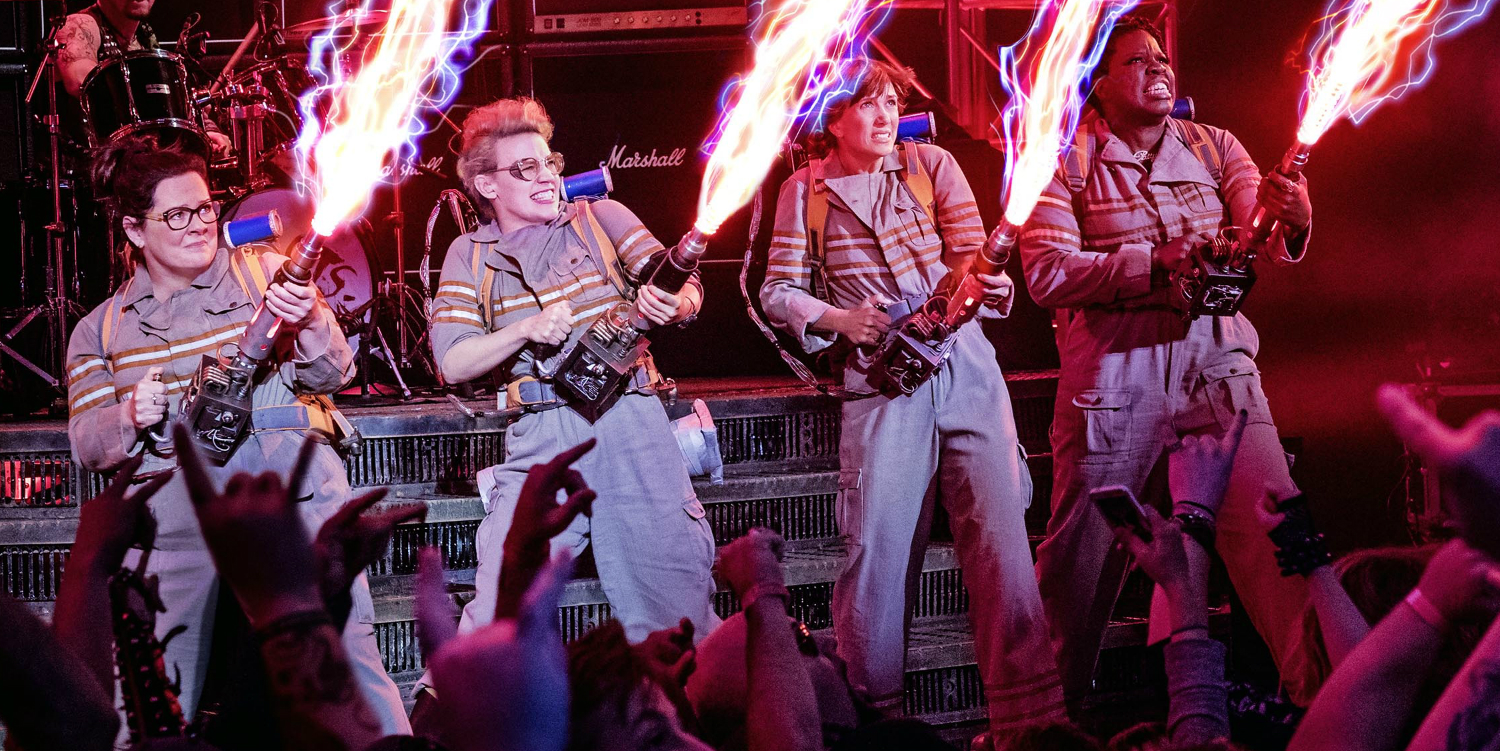 ”
Ah there they are, not crossing streams and all.

Here’s some background. I did not grow up with the Ghostbusters movie in my life. I didn’t see the first film in its entirety until just a few weeks ago. I knew what happened in it roughly, I knew quotes, I saw bits and pieces, and I of course knew the song, but I never really saw it. Similarly, I still have never seen Ghostbusters II, only because I didn’t own it to watch it. So it isn’t something that helped define my childhood full of nostalgia.

Coming from that background, thinking the original Ghostbusters movie was only okay, I also have to say the same about the sequel. Both are comedies and meant to be comedic in nature, but rarely did I find myself laughing. Maybe some smiles or cute moments and the surprise scare, but rarely a true laugh out of loud. But this isn’t a review of the old one, this is a review of the new film. Wiig and McCarthy were both playing relatively un-funny characters. That is because they had to be serious to really sell their passion. Their characters had a few jokes that were revisited and some slapstick but that is about it.

Jones and McKinnon were fine in their roles and a bit more interesting. They were the only characters that actually felt like they had personality and were generally consistent with those personalities. I can see why people find McKinnon’s character the funniest because, well, Wiig and McCarthy are just so drag in comparison. They should have had one less serious character and one more unique but not identical to McKinnon for more actual laughs. She did make me laugh a few times, but Hemsworth’s character did make me laugh the most. They made him stupid arm candy, a nice gender reversal, and they went so extreme with it that it was hard not to chuckle.

Outside of those three characters though the film just wasn’t that funny. Mostly slapstick and chaos. 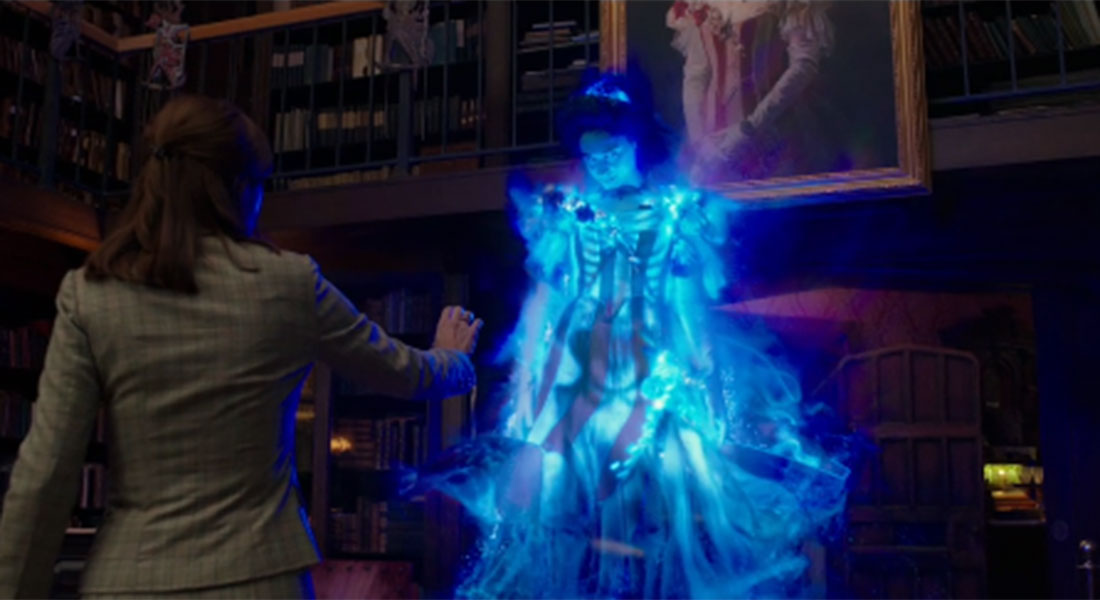 And now here is a ghost, now everyone is represented equally!

The film had a lot of wasted potential. They had Walsh and Williams as agents and they collectively maybe had three lines, they were no-name characters in the end and had no reason to be played by those actors. The cameos from the original cast were okay, but Murray was absolutely dreadful. He wasn’t even acting as a character in this film despite having multiple scenes. He came across as a guy bored out of his mind who was just getting a small pay check. It was embarrassingly bad.

The film was all over with its science as well. Like the original, they would say a lot of jargon that sounded cool but meant nothing out to anyone listening. Their stream weapons were inconsistent with how they worked, making the long final fight scene sort of odd.

And yes, the film was too meta about the message they wanted to send. They had to turn it into movie directly against the online (sexist?) haters as a sly joke. Years later they won’t make as much sense along with the other numerous pop culture references. But commenting about the hateful things people say on YouTube and the internet just took me out of the movie as the film collectively winked its entire screen at me.

But what do I know. I am a guy who gave this an average film. I have probably been biased on my own thanks to everything that has happened. Maybe I am just too afraid to give this a really positive or negative review, so I go into neutral obscurity hoping to maintain some level of unbias but still directly being influenced quite heavily. We will never know and this film or future films in the franchise will never be able to escape it.

* – No not Rick Moranis and of course not Harold Ramis.