Get Low? Alright I will get it over with.

No more references to that!

Get Low stars Robert Duvall as an old hermit man Felix Bush, living outside of a town in the 1930s or so. A simpler time. Why does he keep to himself? No one is for sure, but every once in awhile he does go into town, much to the ire of the towns folk. For some reason, he heads to the local funeral home, run by salesman Bill Murray and his new partner Lucas Black (the kid from Sling Blade!) to set up his own funeral. He has everything already ready for it though, except for the “funeral party”.

Funeral Party? What? He wants to hold a gathering of people just telling stories about him for his funeral, but while he is still alive. Very weird concept, but Bill Murray needs money and will sell anything. So flyers are put up to invite folks, radio interviews, haircuts, new suits, etc.

Also, Felix agrees to sell raffle tickets, $5 a pop, and the winner (announced when he actually dies) will win his home and land, which is quite a large amount.

At first it appears as if the funeral home is trying to rip off Felix, but throughout the movie you are unsure of who is ripping who off.

The event gets canceled a few times, and changed a lot. We find out that he doesn’t just want random stories, he wants his story told. Why he has been living by himself the last forty years, and an admission of his sins. Also included in the cast are Sissy Spacek, as a past friend (maybe former lover?) and Bill Cobbs, as the Reverend from where he used to live. 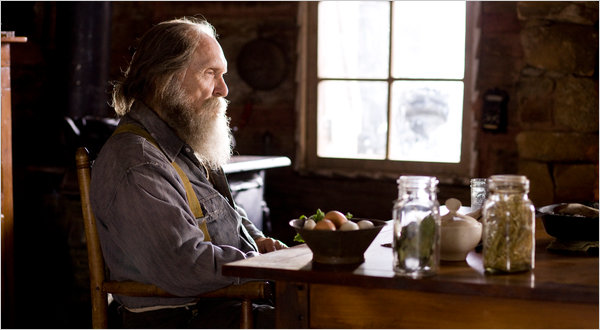 This is also a good film to reflect on with the end of “No Shave November”.

By the end of the film, don’t worry, you will find out the answers to why he is doing the funeral party, why he is a hermit, and what he did in the past. To be fair, those are all kind of the same answer.

The acting in this film is way too good. I am a well noted Bill Murray hater (unless he is in cameos). I banked my getting into college on it. But even he did a good job (but since he was kind of a crook, it was easy I bet). The ending is of course sad too, and when you realize everything that Felix went through in his (fictional) life, you will just want to hug that old man.

The music and designs/costuming were pretty top notch as well. Despite the slow start of the movie, if you pay attention, you will be hooked early on and find yourself on a decent ride.