Welcome to my 1250th review! This Milestone Review is actually a bit cooler than the last few. Something about a “250” is sexy. A quarter of a thousand. That means I am slightly closer to 1500!

Now I know what you are thinking. Freddy vs. Jason? That movie came out like, ten years ago? What in the actual fuck are you doing?

Well, my goal for a lot of these milestone reviews is to pick a specific sort of unique movie. A lot of the times they are well known movies that are critically panned and hated, which allows me to write to a specific audience and laugh at it with them. It also allows these “bad movies” to maybe get a fair shake, should they be great.

Unfortunately with my criteria, I feel like I basically got all the movies in my time frame. I mean, Twilight and all? After all the other movies, I kind of have to branch out more.

The reason I picked Freddy vs. Jason is because it was a pretty intense movie when it came out, putting together two horror icons who have been in pop culture for decades. And I never watched it! I only thought about it thanks to the review of the documentary Never Sleep Again: The Elm Street Legacy. I realized this would be perfect for my next milestone, and I hope it combines the best elements of the two franchise with plenty of death and laughs. 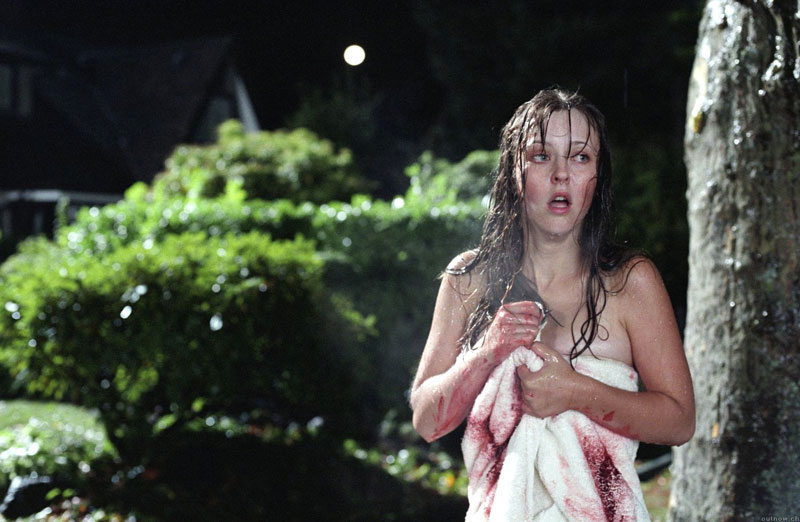 I guess this scene falls under a plot element that both franchises tend to include in their repertoire.

Freddy Krueger (Robert Englund) is a sad evil little nightmare. His power came from fear. He was getting back at the youth of a neighborhood that killed him, because he had it coming. Well, whatever the town did, they seem to have forgot about him. If they aren’t afraid, he has no power. If he has no power, he can’t invade their dreams. If he can’t invade their dreams, he is forgotten and will live an eternity alone.

So he finds Jason Voorhees (Ken Kirzinger). Resurrects him, pretends to be his mother (Paula Shaw), and tells him to head to Elm Street for some revenge killing. If Jason does it right, they will think it is Freddy, and he will be back to kill again!

Especially her. They should make her their main goal and focus mostly on her. Definitely definitely her.

Hey look at that. Freddy’s plans work perfectly. Right after some teen sex, Gibb (Katharine Isabelle) is taking a nice shower, and her boytoy gets stabbed a few times and folded in half in one of those bed things. Man, fucked up! Since he died in a bed and in a weird way, this gets some of the older folks talkin’. They think somehow, despite all their prep, Freddy has come back and is again, going after their kids.

The kids don’t know that yet though. They have been sheltered and hidden from the horrible past of this area. They do know that somehow, some people are getting murdered. And you know what, it isn’t just in their dreams.

Sometimes a weirdo in a hockey mask shows up.

And Jason sure does know how to make an entrance.

Shit, one dude was even in a nightmare with Freddy who was too weak at the time. He woke up and escaped, but then was just straight up murdered by Jason. Everywhere seems to be terrifying.

Outside of the vague nightmares, they wouldn’t really know about Freddy if it wasn’t for Will (Jason Ritter) and his buddy Mark (Brendan Fletcher). They were at the local Psychiatric Hospital. Aka, they were being terrorized by Freddy and the town put them there to keep it away from the untainted youth! They even had a non-FDA approved miracle drug that would suppress dreams. Huh, how handy.

Either way, Will used to date Lori (Monica Keena), our main heroine pictured above. No bad blood between them outside of the fact that she had no idea what happened. He says he saw her dad (Tom Butler) kill her mom. Oh, that’s awkward. 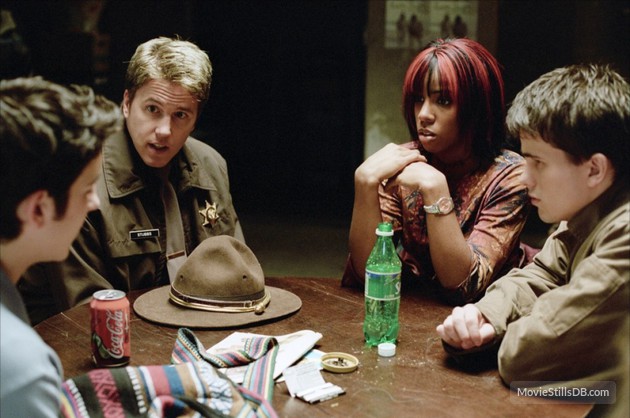 With two supernatural entities, everyone agrees that is the most fucked up part of this.

Wait a minute. Everyone right now has to realize that Jason and Freddy share a universe. So some of these guys have heard about Jason before, and they know that this Camp ClearWater is a haunted area that people don’t go to. They know the stories.

But even more importantly is that Freddy is really fucking pissed off. Jason on numerous occasions keeps killing, but he doesn’t want that anymore. Jason has killed people in their sleep, right before Freddy can do the job. That isn’t cool man. That is totes uncool. 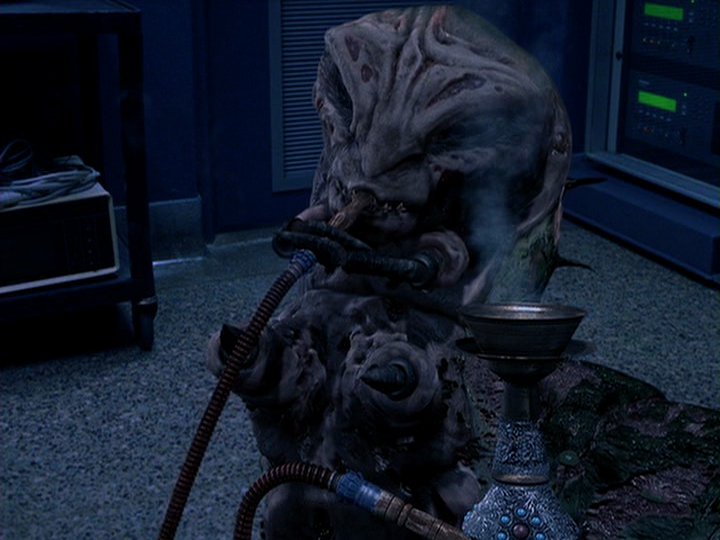 Yeah man. Why can’t you be chill, man?

So, thanks to the help of young Deputy Scott Stubbs (Lochlyn Munro), they are able to break into the ward! Their team is young stoner Freeman (Kyle Labine), Lori, Will, Lori’s black best friend (Kelly Rowland), and a nerd!! (Chris Marquette).

Well, Freddy decides to possess one of the kids, because now seems like a good idea. He uses the stoner, because he can get him high first.

Stoner Freeman ends up getting rid of all the drugs. Not only that, but he also is able to tranquilize Jason who is still chasing the kids everywhere they go!

That’s right. Now Freddy can fight Jason in the Dream World and finally take him down. 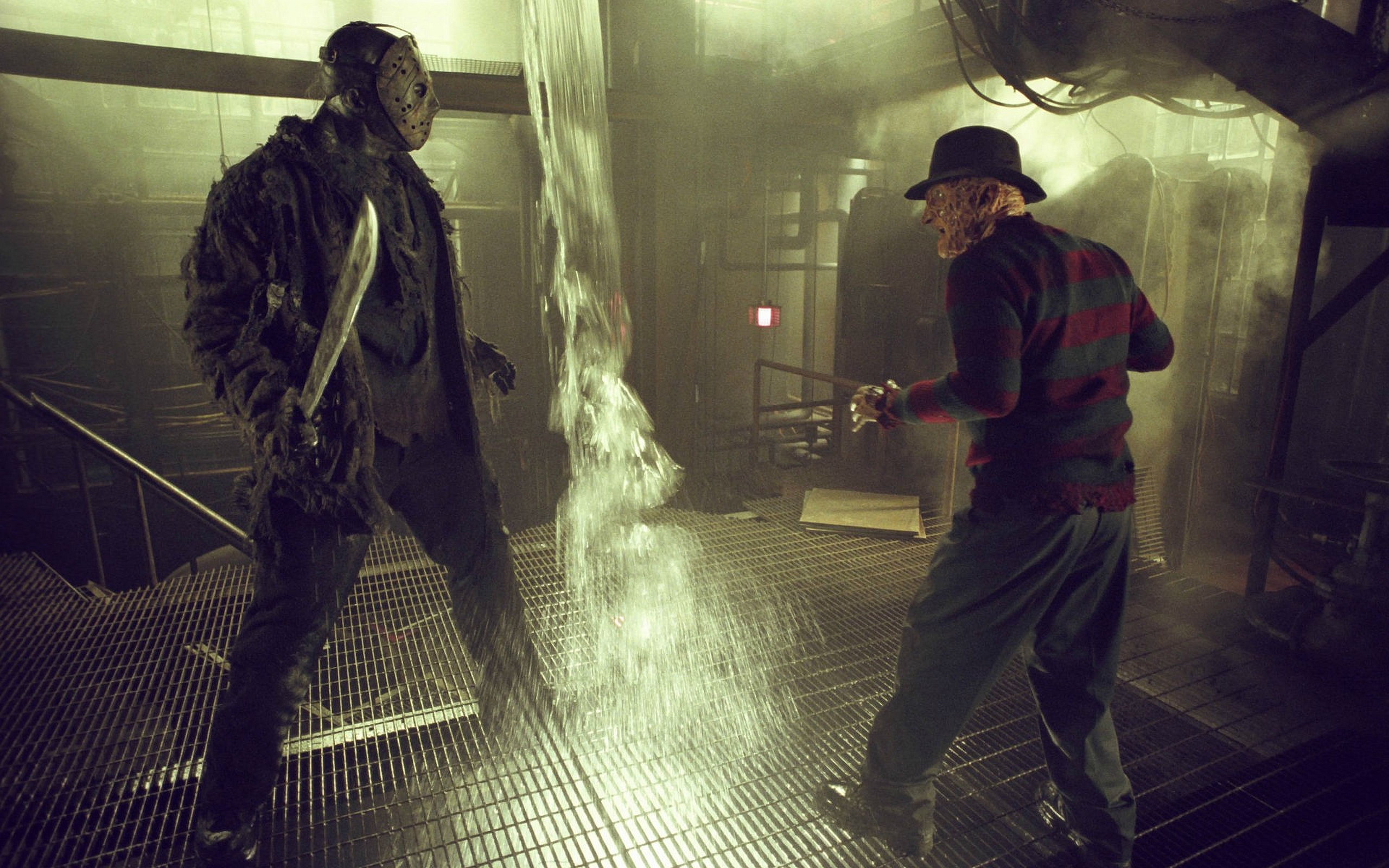 I know, I can’t believe the two iconic characters actually get to fight either.

Well, given it is home turf for Freddy, the nightmare realm, he really starts to fuck Jason over good. So many torture devices to show him the business. But guess what? Jason seems invincible. Nothing is hurting him.

That is because Jason isn’t afraid. It isn’t until Freddy realizes he has one fear, water, that he knows what to do. He takes Jason back to the time when he was young and he drowned at the lake.

Meanwhile, back in the real world. The kids have a plan. They are continually tranquilizing Jason to make sure he doesn’t kill them and driving him back to the camp where he normally lurks. They also tranquilized Lori to go into their dream battle.

They figure if they can bring both of the entities to the camp, Jason has a better chance of beating Freddy. If he wins, then they might leave them alone because he is home. If he loses, well, they still have a Freddy issue, but at least Jason is done.

Lori’s job is to make sure Jason doesn’t die in the dream and to bring Freddy back to the real world with them. Yay more violence! 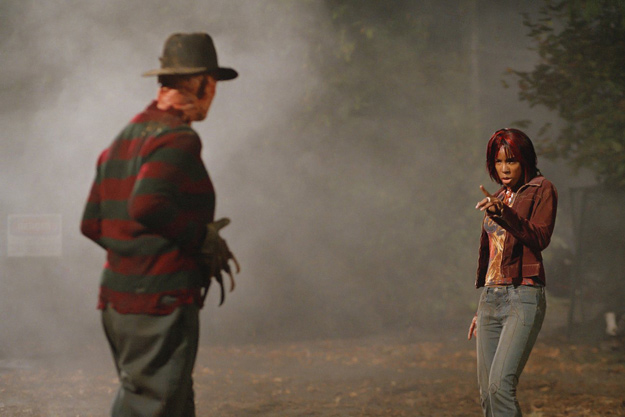 Needless to say, their plan only kind of works. Eventually Freddy is in the real world too, but more of them keep dying in the process. But at least Freddy and Jason are fighting again. And maybe, just maybe they can escape if one of them wins.

I bet you want to know who wins. Well, neither win of course. They both attack each other with each other’s weapons. But Jason does decapitate Freddy! Just. Freddy still winks by the end of the movie.

That lets us get more sequels that refuse to exist, including the very rumored Freddy vs Jason vs Ash movie that would be very sexy. I don’t care how old Bruce Campbell is.

Oh and Garry Chalk is in this movie as main police chief guy. I couldn’t find a good time to talk about him. 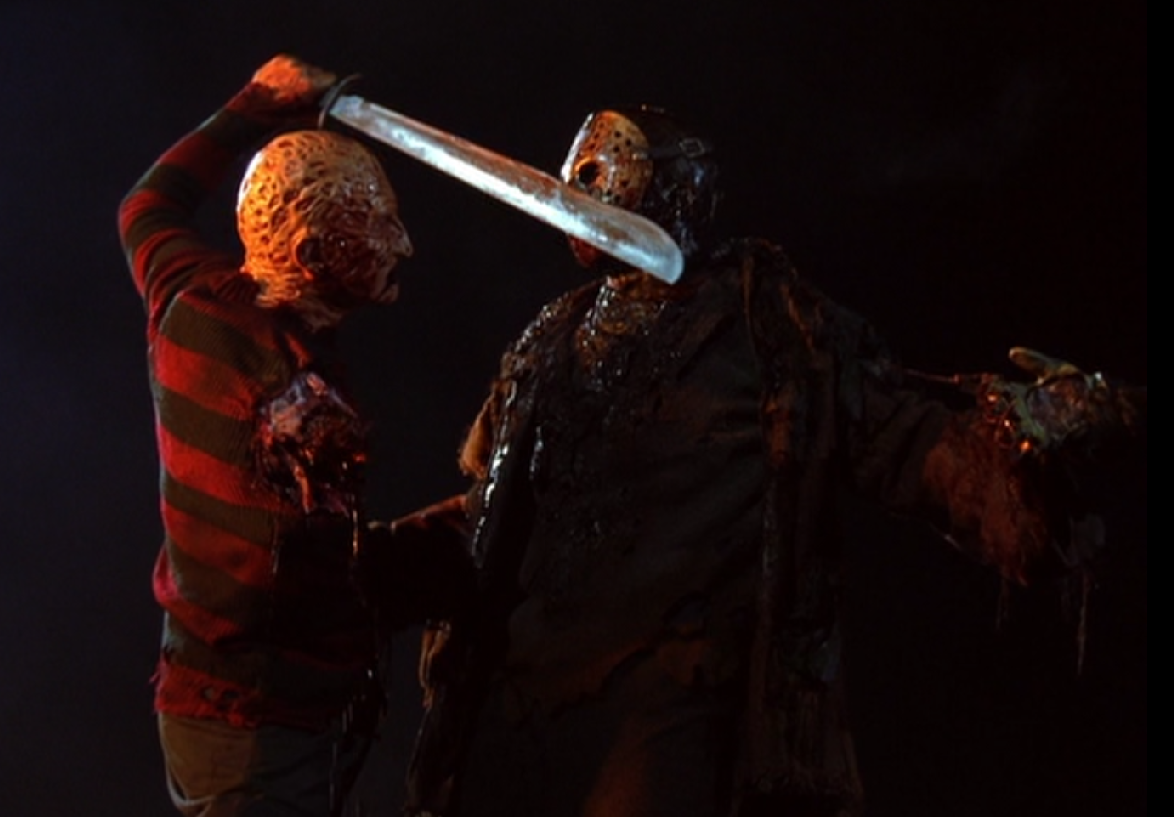 More fight scenes than you can shake a machete at.

I actually found Freddy vs Jason to be very entertaining. It took the extremely campy and scary moments from the Nightmare franchise and combined them decently with the senseless stabby violence of Jason.

I am clearly more of a Freddy fan of the two, but I think both of them were represented in positive lights for their respected franchises. Neither side of this fictional battle should feel slighted by what occurred in this cross over.

And they didn’t even skip out on the fight scenes. They made sure the two main battles between the two were unique, long, interesting, and true to characters. It wasn’t just 2 minutes tacked on to the end. No, we got a lot of it and the build up felt natural.