I totally forgot the film Experimenter existed. In 2015, I saw it was coming out, planned on watching it, and then, well, we are halfway through 2016 now. Shit.

The only reason I remembered it existed was browsing Anton Yelchin‘s IMDB page, looking for recent films he was in that sounded interesting enough to review. The title Experimenter seemed good so I figure’d I’d “randomly” give it a shot.

It wasn’t until I actually started watching the film did I remember that I totally knew about this film before and I once again have found myself being a forgetful dumbass.

But hey, Yelchin is in this movie! And some other folks, can’t wait! 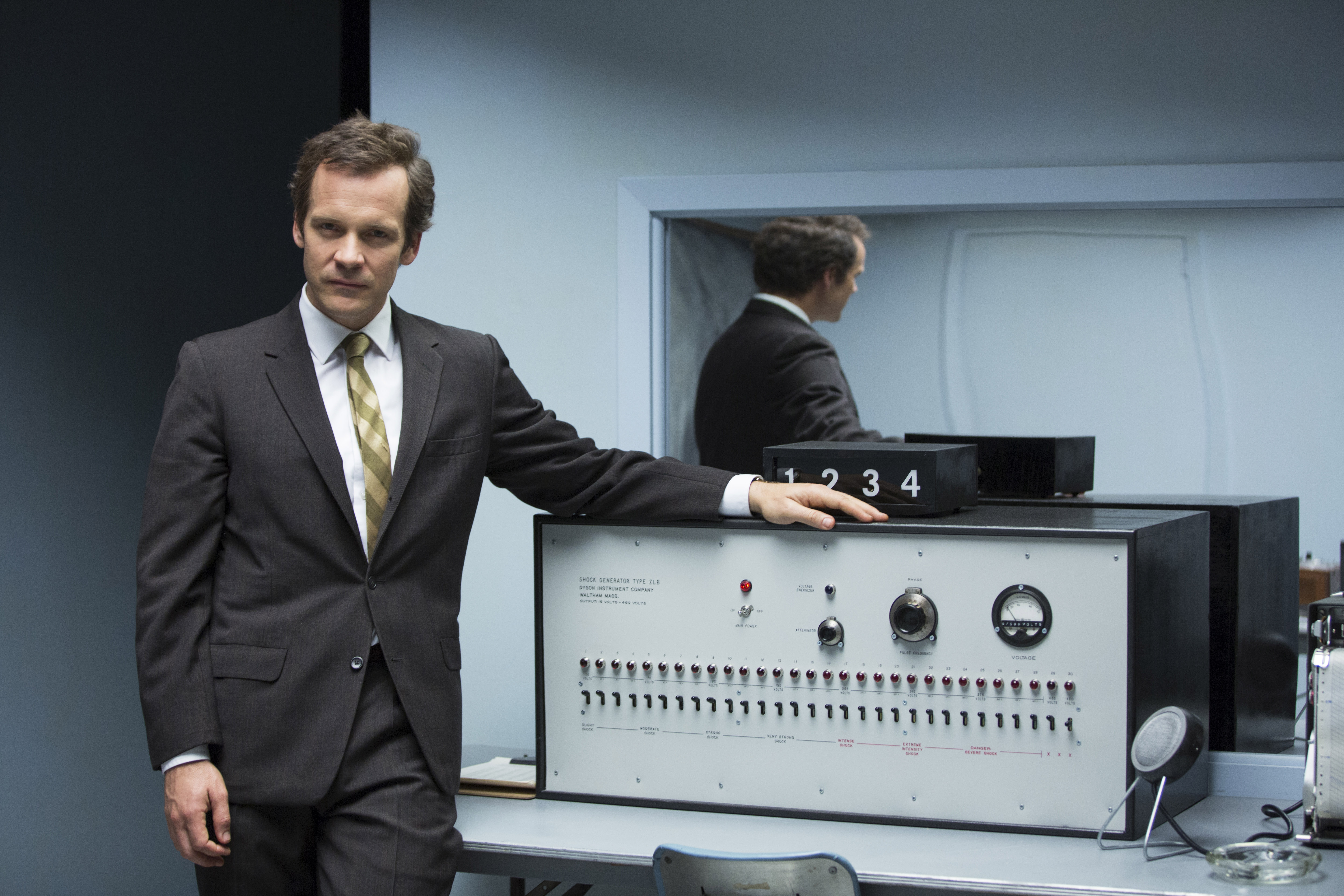 And I also have a huge hankerin’ for some science, even if it is of the social variety.

Stanley Milgram (Peter Sarsgaard) is a social psychologist in the 1960’s-80’s, known for quite a few extreme experiments that really got the world talking. And no, he didn’t do The Stanford Prison Experiment, he did all the other ones.

This is mostly about his super famous experiments, dealing with obedience, trying to figure out why so many people could commit terrible acts during the Holocaust. This had a great concern to Milgram, who himself was Jewish. So the main point of his experiment was simple.

He would have two people come in, one would randomly be assigned the teacher, the other the learner. The learner would be hooked up to an machine that would shock them every time they got an answer wrong and they would sit alone in a room. The teacher would ask them questions based on a memory assignment and if the learner asked the question wrong they would get an electrical shock. Every wrong question, another shock, but a higher voltage level. And the teacher got a sample low shock at the beginning to get a feel for it.

Over time, the learner would start to scream louder and louder. And eventually ask for it to stop and then refuse to talk and refuse to answer (which makes them more wrong). The teacher doesn’t know that the learner is actually someone in on the experiment and not getting shocked at all. And of course, Milgram’s results were shocking. The world wasn’t ready for his tests and they raised quite a hubbub.

The first half of the film is mainly about that experiment and its variations, with the second half being the rest of his life, his other smaller (and still brilliant) experiments, life with his wife (Winona Ryder) and eventual death. Sad face.

Also featuring Jim Gaffigan and John Palladino as assistants, and John Leguizamo, Anton Yelchin, and Taryn Manning as a few people who were paid participants. Aka, very small roles. 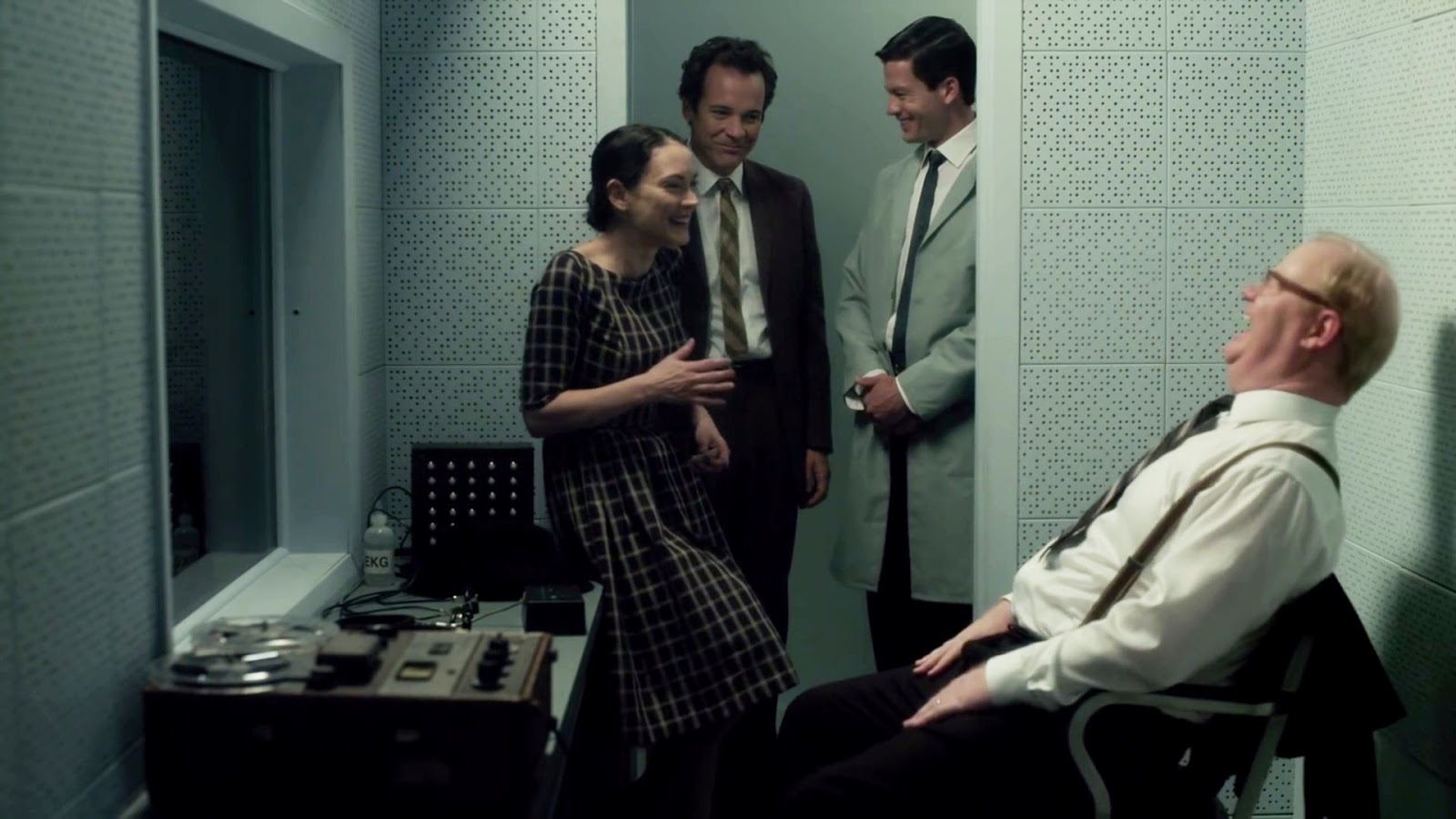 This unflattering freeze frame of Gaffigan gives him a mouth that can fit several hot pockets.

Experimenter ended up being a really strange movie and not your normal biopic. It is definitely a drama, but it still feels comedic in a way without telling a lot of jokes. Like, the whole film is saying his life is just one big joke, but again, not in a mean way. It is narrated by Sarsgaard, constantly breaking the fourth wall to discuss his life (and death), no shame at all. Hell, it even has an elephant in the background to not so subtly talk about the elephant in the room.

Speaking of backgrounds, a lot of them are just so incredibly fake it is beyond obvious. Like they made this film in the actual time period that it is set. You can notice it in the car rides, when they go to a one time scene, and it is just fake. It was intentional, perhaps because they are almost insinuating that the aspects of his life not in the university are just a series of tests and fake set ups for experiments.

Shit, from the last two paragraphs, you might think this movie is meta as fuck. And honestly, I think that was their point. Meta as fuck but in a strangely subtle, obvious way.

I clearly have no idea what I am actually talking about. This movie is really entertaining and just so damn odd. I want to learn a lot more about Milgram, so I should read that book that made people scared of him. Or a biography that goes over all of his most famous experiments.