I think Drive Angry is the last Nick Cage movie in the last few years (outside of Bangkok Dangerous) that I have not yet reviewed. I have come to expect a certain amount of apathy from some of his movies, but not all of them. For every Knowing, there is a Kick-Ass. For every Season of the Witch there is a Sorcerer’s Apprentice. So who knows what the next movie will be like? He forces you to watch them all, damn it. 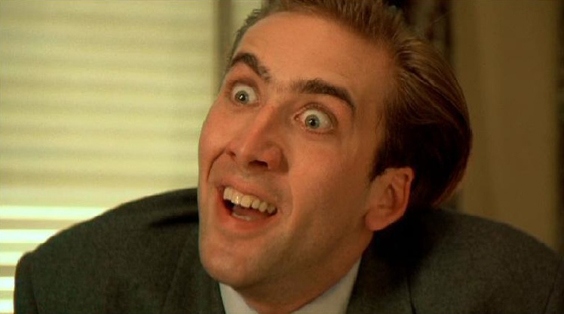 Cage: The human embodiment of an enigma.

This review probably has some spoilers, but I doubt those reading it will care. The movie stars Cage as a man who has escaped from Hell. His daughter was killed by cultists, and they took his granddaughter, a baby, to be sacrificed in three days in order to bring Hell on Earth. Satanists! Also an enigmatic group of people. So he, along with his Godslayer (a gun that can remove a soul from existence, stolen from Satan) are on a quest to catch up with the cultists and end them completely. Or at least just Billy Burke, the head guy.

He meets up with Amber Heard and borrows her car / helps her out quickly on the journey. There is also The Accountant, played by William Fichtner, a mysterious suited man following Cage and trying to bring him back to Hell.

This movie is a grindhouse-like movie. It is gritty, over the top action, bad effects, all on purpose. But what made the other “Grindhouse” movies entertaining was that besides all of that, the plot was decent and the action was awesome. This isn’t true for Drive Angry. It had all of the right parts, but the plot and action I found to be pretty boring. As you would guess, there is a lot of driving and chasing too, and even that seemed lackluster.

When you take the words “Hell”, “Driving”, and “Nick Cage” together, most people are going to expect Ghost Rider, another bad movie, and not this. This is accidentally too close to Ghost Rider (not in plot, just in keywords). That seems like another mistake on Cage’s part. 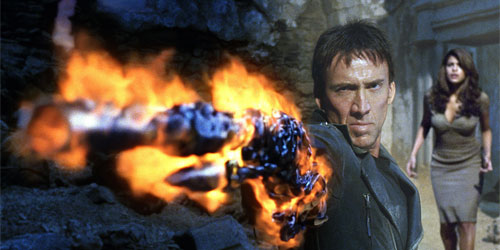 Wait, is that him with a badass gun in Ghost Rider too? What the hell?

It is obvious what kind of movie they were going for. They definitely succeeded in that. But Drive Angry just is not as entertaining as the other films of that genre. Probably the real reason Cage has been in a lot of movies since this one, to cover it up.