Originally I was going to just ignore Dredd 3D. Hopefully it would go to the cheap theater at some point and I’d watch it then, but $10? It’s probably going to suck. But then something happened. People I knew were liking it. It was weird. The internet liked it. What? Don’t people hate remakes?

I never got to see Judge Dredd, I was like six at that time and it is violent. Hell, I still haven’t seen it. But what I do know about it is the pop culture references, of course. Basically it can be summed up in these 10 seconds for all I care. LAWWWGGHHH! 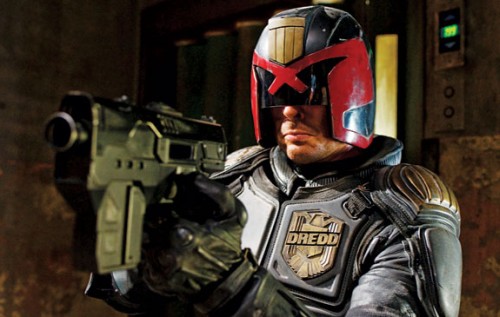 Yeah, well if anything, this new guy looks like the law.

Dredd 3D is set in…the future! Giant ass cities, so many people. Lot of them live in these big tower things. The police force are now called Judges, because they will find criminals and carry out the sentencing on the spot, and all of it gets recorded. It is just what has to be done with this many people. Too bad only some small percent of reported murders even get investigated by the Judges, they are so busy.

Who is the judgiest judge of them all? Judge Dredd (Karl Urban. Who is also a Doctor, sometimes). He knows all the rules, all the tactics, and is a bad ass motherfucker, more or less. He has no remorse, and will sentence without a care. Definitely won’t ever remove his helmet. But he is asked to train a rookie, Anderson (Olivia Thirby) who is also a psychic. Yeah, one of those mutants, who lucked out and got a useful transformation instead of an extra hand out of her stomach.

So yeah, she suggests a place to go. These three guys got skinned and fell about 30 stories. Could have been worse, could have been from the top, 200 stories up! They investigate, turn it into a drug bust. New “Gang” is in the area, lead by a Ma-ma (Lena Headey), who took over the entire complex. Hell, turns out they have a new drug that is hitting the market strong. Basically it makes your body feel like life is in slow motion. Kind of awesome. But one of the people she takes from the bust, Kay (Wood Harris), she can tell killed the people directly. He might even know the entire working operation of the drug place, meaning if he gets interrogated, he might spill the beans. Can’t have that happen.

So Ma-Ma does what everyone does. Gets the weird Technie (Domhnall Gleeson) to lock down the building completely, and shut off communication, and tell the residents to kill the Judges. Can they get out alive, and you know, actually still obey the law? 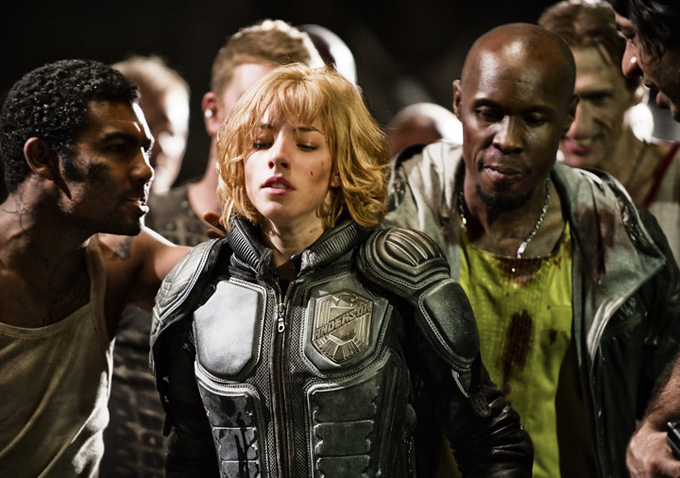 She has no helmet eh? Well that makes things easier. You know, shooting her in the head.

Wait a second. People trapped in a living complex, and wanting to take down the leader with the whole building trying to kill him? That unfortunately sounds familiar. If you read my reviews a month ago, it would sound like The Raid: Redemption. That really is unfortunate!

These movies were probably being made around the same time, so the similar plots were not intentional. Just ruined the awesomeness of this one.

Karl Urban? Wow, what a Judge Dredd. Obviously the best I have seen, but he kicked a lot of ass, and I was cheering him on. Never removed his hat, so really couldn’t tell it was him, but he made that character awesome.