I have failed the movie going public tonight.

Tonight I have seen Delivery Man, but I did not watch Starbuck, the foreign movie that this one is based on. It isn’t super foreign, because it is set in Canada, but it is the French part of Canada. Plus, the director and writer of Starbuck made this version too! Really, it is just some strange re-imaging with a star in the US that people might want to go see. 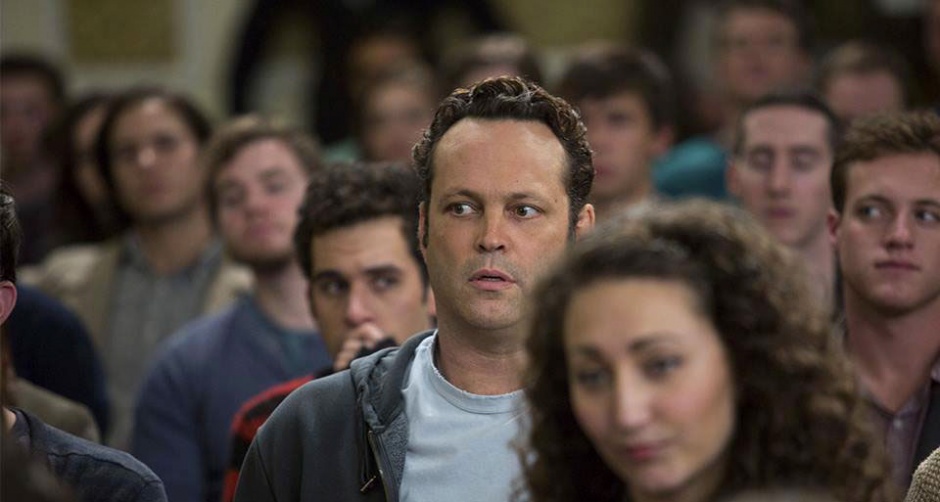 Well, they might have wanted to see five years ago.
David (Vince Vaughn) is a piece of shit. It sounds harsh, but he really is. The movie makes sure you know that early on, by showing him rack up parking tickets, fail at his job delivering meat, disappoint his family, disappoint his girlfriend, and get turned down for loan applications. He owes some thugs about 80,000, and no way to pay it back.

And there was a screw up a fertility clinic about 20ish years ago. David donated sperm over 600 times in a few years, under the name of Starbuck, and because of its high quality, it was given to and successfully birthed 533 children. Over 100 of them are suing the company and David to determine his identity, believing their right to know their biological father is far more important to his right to privacy. Huh.

Who wants to be known as the guy with 500 kids? Especially when his girlfriend (Cobie Smulders) is pregnant and can’t imagine him ever being a father.

Basically his life is falling apart and he has no idea how to fix it. Maybe he can fix the lives of others? Despite his best interests, and the wishes of his lawyer (Chris Pratt), he decides to check out the profiles of a child, just one at a time, and see if he can help out their life in any way while remaining anonymous.

Clearly a plan that won’t backfire.

His immediate family includes his father (Andrzej Blumenfeld), and two brothers (Simon Delaney, Bobby Moynihan) and some of his children are played by Jack Reynor, Dave Patten, and Britt Robertson. 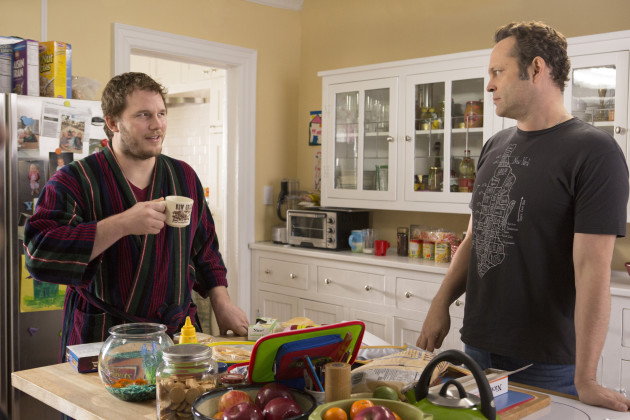 Really, if all you want is Chris Pratt in bath robes, then this is the movie for you.
From what the internet tells me, this is actually a scene for scene remake of Starbuck, so I don’t feel too bad not getting to watch the original before this one. The last time I attempted to do something like that was when I watched both Death At A Funerals back to back, and that was just awkward.

Speaking of awkward, that is this movie in a nutshell. It touches on a lot of personal and serious topics, but generally in a strange way given the circumstances of this film. I find it hard to categorize it as a comedy, because although the idea is silly, the jokes are really few and far in between and it gets really dramatic. If you go in expecting a laugh a minute, you will be disappointed.

Vince Vaughn plays a screw up who has his heart in the right place. The reason that sounds familiar is that he always plays those roles, because he is somewhat believable at them. I am not sure how to describe the emotions I felt during this movie, but I can tell you they were there.

I think the movie did far too much disservice early on by making me hate the main character. It was vague on a few important details, like just who was after him for money and why they were surprisingly passive over 7-9 months. The passage of time was very hard to follow, when months would pass for his character without letting the viewer know. Certain problems ended up getting solved too easily and David had a surprising amount of money to give to use for his kids, and gas, and shopping when he owed so much cash in the first place.

I can’t say for certain if this film will stick with me in the long run, but for now it is a decent attempt at trying something new (well, a remake of something new), and I can applaud it for that. It also does a good job of teaching about the potential horrors of sperm bank.