Daybreakers took me awhile to watch mostly because I assumed it was supposed to be some sort of horror film. There is no elements of that though, just straight up action.

Action, with some science talk and lots of vampires. 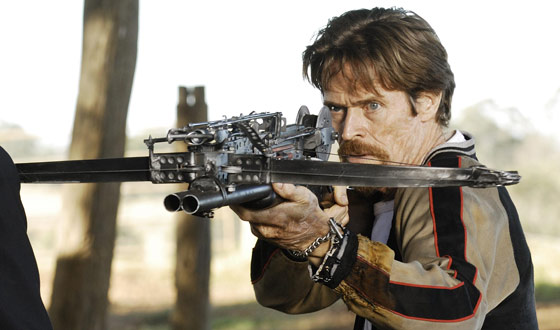 It also has crossbows. You know. Because bullets “don’t hurt”.

Ethan Hawke is a vampire! But most people are. The world is mostly vampire, and they can all think still. No worries. But, there are less and less humans out there. And they are running out of blood. He works for a company that extracts blood, and has blood farms in order to help sustain the population, but if they don’t solve their issue, they will run out within a month. He is a farmer, while his brother, Michael Dorman, is a hunter who goes out to collect humans.

He also doesn’t drink human blood. Guess he feels guilty. Well accidentally he finds a group of humans, including Claudia Karvan, and protects them from being caught. Somehow they trust him, and he is a scientist, so they bring him back to their hide out. BUT WHY. There he finds a really weird looking Willem Dafoe…with bite marks! Yet he is in the sunlight. Heck, he is a human again. Somehow he found a cure.

So now that he is on the run anyways, he works on developing a cure for vampirism. Hopefully no one finds out, and tries to use this knowledge to solve the blood shortage by turning prisoners into humans. Like his boss, Sam Neill. Or his scientist buddy, Vince Colosimo.

I don’t know how to insert Isabel Lucas into the plot summary but she is a human too, and a rather important one.

Also, some weird ass shit is going on here.

I can’t help but think that a lot of this is supposed to mirror oil and energy. But if it is…what? It sounds like it is supposed too, but in the metaphor of the vampire world, the solution to the oil crisis seems to be forgo technology and go back to the way we used to be before oil. Aka return to being humans. Which is a stupid solution to energy use.

Doesn’t help that “use less” energy/blood and “find alternative solutions” to energy/blood have already been explored by these vampires, and it looks like they are fucked. Are they saying our world is fucked, and nothing will work except for a trip back to the 19th century?

I don’t know at all. Bad parallels. Bad acting. Weird cure and then additional way to cure at the very end. Not at all sensical.