Another documentary! I already said I would stop watching political based documentaries with Hot Coffee, but I am fine with entertainment based ones. Doesn’t make this any less weird though.

This film is a documentary of Coco post NBC breakdown, pre TBS show, where he went on some 44 stop tour thing around Amurrika and performed. There are songs, jokes, bits, random celebrity cameos, and more. Also, most of it is of course getting to see the backstage of it all. Get to see Conan be himself.

Parts make him feel like a huge dick, like one scene early with his assistant, but that level of dickness dampens throughout it towards her, so one assumes that it was an obvious joke earlier on. Or something. Who knows. Edited things are edited. One show Jim Carey just showed up and came on stage to do things, apparently. Cause Jim doesn’t play by the rules. Andy Richter was also in this of course, and he acted more or less like he does on stage.

I guess it was interesting to see once, never really have to again. The funniest parts tended to be normal Conan as opposed to the scripted stage show. (But you know, all of the normal things could be scripted to. On a related note, what is actually real anyways?). I am giving this the average rating, because the only people who will watch this are those who love Conan. Those who don’t wont. Those who do will love it, and I assume the haters will give it at 0. So average review is average. 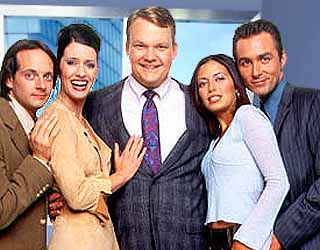 In other news, I want Andy Richter Controls The Universe to return as a TV show. So much for wants though, right?