Let’s talk about psychological thrillers based on real life stuff. I only am bringing this up, because guess what, Compliance might mess with your head, and it is totally based on a real story.

Kind of like The Experiment. Except in The Experiment, it was a real psychological test and they fictionalized aspects of it in the movie, and it was still good. In Compliance, it is based off of THIS real life event, and it keeps true to what actually happened. Roughly. I think. Shit, I just read about it again and got all disgusted at it.

Not as disgusted as her face, which looks like someone farted.
At a restaurant that is totally not McDonalds but something generically different, it is a busy Friday night. Why are Friday nights busy? Fuck you, that is a dumb question, learn the real world.

Well, they get a phone call from an Officer Daniels (Pat Healy). He says they have a situation at the store, a young blonde girl at the register apparently stole some money from a customer, right out of their purse, so the customer went to the police station to complain. He has the regional manager on the other line, and he needs the manager (Ann Dowd) to take Becky (Dreama Walker) back in the storage room and question her.

Officer Daniels is on the phone the whole time, including when the strip search happens. But it turns out, Officer Daniels isn’t a cop at all, and just some dude prank calling some fast food places to make them do fucked up shit to employees.

What a twisted dude! Bill Camp is also in here as the fiance to the store manager, who might have to take over for her cause it is such a busy Friday night. 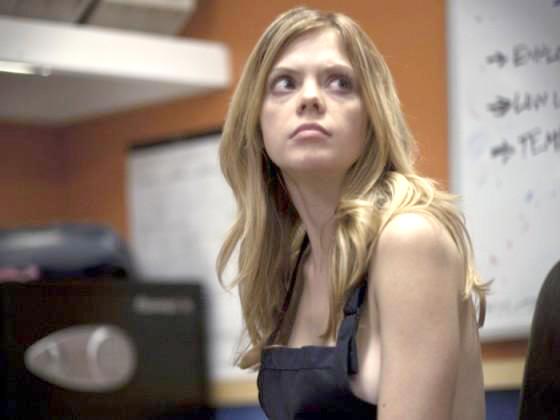 This is not sexy. Sure, she is just wearing an apron, but the torture-esque part kind of ruins it.
I think reading the story via text gave me a worse emotional reaction than the actual film showing the events. Somehow, I wasn’t able to really get affected by the story when it occurred in front of my eyes.

I am not saying the acting was bad (and it wasn’t great either) because that isn’t necessary. They are just trying to be real people. Because it was close to the actual events, as the film unfolded I found it harder to stay interested.

Basically, whenever they amped up what they had to do to Becky in the room, there was always uncertainty involved, and the phone people didn’t want to do it (yet always did) and it got annoying. They always repeated the instructions starting with “He said I have to…”, which just got ridiculously annoying. I mean, if half the dialogue is hearing the same stuff twice, that gets annoying.

I am pretty sure in real life, especially when the fiance got there, if he was watching her and making her do things for over two hours, eventually he wouldn’t phrase it like that anymore. But we never get to see the really shocking stuff that happens. Only two of them were implied. They spent so much time on the initial get naked and find someone else to watch, it was stalling for no reason.

Overall, it is an okay movie, but didn’t fuck with me psychologically enough for me to love it.