Originally on this website I refused to review Horror movies, because I was a coward. That means once I got over it, I had a lot of backlog to catch up on. So if you have been seeing a lot more horror on average, now you know why! Because there is a lot of shit out there, and you need to know which of that shit is good and which of that shit is bad.

With a movie called Chernobyl Diaries, you might be able to figure out which side of the fence it falls on. 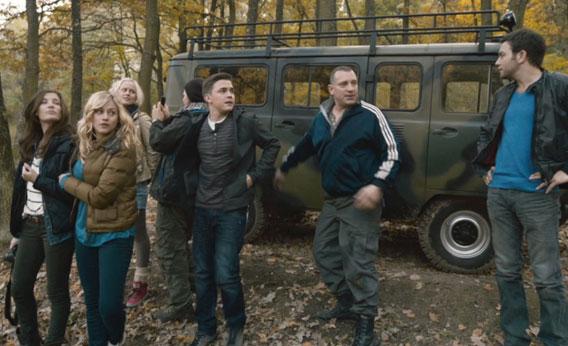 Or maybe it falls on top of the fence itself, and falls awkwardly on both sides.

This movie began with the song Alright by Supergrass. You’ve heard it, trust me. I was confused.

But lets run with it. Traveling around Europe can be exciting for people in their early 20s (and well, anyone). Chris (Jesse McCartney) and his girlfriend Natalie (Olivia Dudley) and third friend Amanda (Devin Kelley) are running around Europe, being young and free. They stop in Kiev to visit Chris’ brother, Paul (Jonathan Sadowski), and he likes to live life on the edge.

Paul hears about this “extreme tour” of Pripyat, the abandoned company town which sits in the shadow of the Chernobyl Nuclear Power Plant. Oh snap. It would be lead by tough guy Uri (Dimitri Diatchenko), with another couple (Nathan Phillips, Ingrid Bolso Berdal) joining them.

But when they get there, they are stopped by the Ukranian military. For some reason, they cannot go into the abandoned city today. Huh. Too bad. What? They will sneak in. Good idea. It is pretty cool place, very eerie. But when the van doesn’t start before dusk when they try to leave, they get nervous. Apparently someone has sabotaged their vehicle. Now they are stranded in an abandon city. Oh boy, what could go wrong?

“Who’s there? Is that you, Fred? Fred, stop being weird.”

I wonder what the survivors of the Chernobyl explosion feel about this movie. Actually, no, I don’t care. If we had to worry about offending people before we made movies, a lot of movies wouldn’t get made. I can’t have that happening.

Dumb kids were being dumb in this movie, and the timing felt off. Their second day in the city seemed incredibly short, I am not sure why it took them so long to do the various things.

But at the same time, making this movie with what they worked at, it was surprisingly okay. There was a variety into the deaths of these poor saps. They weren’t just disappearing off the side of the camera, which well, some did. The ending was a bit expected, but still glad they went that route. It unfortunately opens up room for more of these, but I don’t want to see another one.

You know what? This movie had a bear. A big fucking bear in it. I love bears. Bears should be in more movies. It is not a complete pile of shit. How could it be, it has a bear!