That’s right, there are two Captain movies this year. But Captain Fantastic isn’t a superhero in the normal definition of the word, but if you think about it, he is still a hero to the intellectual community out there.

Which you shouldn’t be thinking about yet, because this is the introduction.

I will note that this film has Viggo Mortensen penis in it, so for those Lord of the Rings super fans, this should really get you on board.

And their outfits are even fantastic!

Ben Cash (Viggo Mortensen) and his wife, Leslie (Trin Miller) have decided to say fuck modern society and to live in the woods. In fact, they made this decision a long long time ago. And at this point, they have six kids. Bodevan (George MacKay), Kielyr (Samantha Isler), Vespyr (Annalise Basso), Rellian (Nicholas Hamilton), Zaja (Shree Crooks), and Nai (Charlie Shotwell). Unique names of course, so they can be unique people in the world.

Speaking of being unique, when I say living in the woods, I mean totally outside of society in Washington state. They hunt and grow their own food. They teach their kids to learn about the world, to be socialists, humanitarians, free thinkers. They train them to survive, to hunt, to build their endurance, to think through dangerous situations. They are teaching them many different languages and how to play many instruments. It is an intellectual smorgasbord.

And then Leslie dies. By her own hands, suffering from a form of PTSD after their last child died. And now they are in a strange situation. Because of how they live, her body is sent to her parents (Frank Langella, Ann Dowd), a rich couple who never approved of her life style choices and of course her husband. They are all the way in New Mexico and the father has threatened to take his children if he shows up, child endangerment laws and all, blah.

Fuck that. They are trying to give his wife a normal, casket, Christian burial. But she is Buddhist and had explicit instructions in her will, and they are not honoring that. So he has to load up their bus and take his family down to New Mexico, through civilization, where the hardest training is yet to come, for all of them. 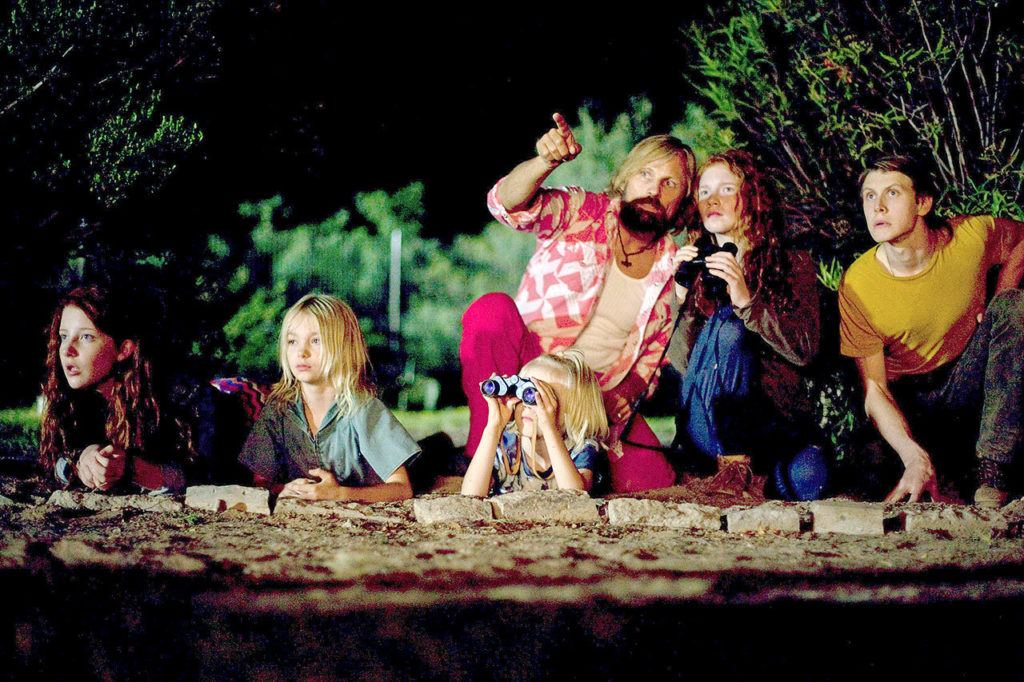 Learning how to break and enter into a house can be the difference between life and death, technically.

It is hard to classify Captain Fantastic into a few genres, it turns out. I called it a Black Comedy, but it really doesn’t even fit that bill, and Black Comedy is usually the “weird films that are uneasy and funny catch up” category. A serious drama, comedy, absurd movie maybe. Not Rubber absurd, but it just comes out with such completely counter culture points of right off the back it can take you by surprise.

None of the philosophies or ideas expressed in the film are new of course, they are just taking an idea to the extreme and seeing how it plays out. It leads to a unique film and one where the viewer is happy to take the journey.

The cast of characters is wonderful, with at least 4 of the children having pretty distinct personalities. It is harder for the youngest two of course. Mortensen plays a dad trying to do what he thinks is the best for his children, and it shows. The acting is phenomenal all around, with plenty of smaller amusing scenes and intellectual arguments to show the good and bad of their situation.

The ending is a bit weird, but he movie is entirely weird, so that shouldn’t be too surprising.

If you want an intellectual, weird, and slightly morbid film, Captain Fantastic is for you. If you don’t want any of that, then you might not like good films.