“What in the fuck is this?” You might all be asking yourselves. “You said you don’t do older movies! You lied to us! We trusted you!” Stop talking in unison readers, that is creepy.

This is a special occasion, much like my Milestone Reviews. I am taking part in a Blog-A-Thon with the theme of 1984. Here is a banner I am supposed to use.

So yeah, a week long blog-a-thon of only movies from 1984, and I picked C.H.U.D. because I am a winner at heart. C.H.U.D. is a movie I had never seen before, but definitely something I had heard a lot before. The first I heard about it was the summer of 2006. That is when Clerks II came out in theaters, I had to drive an hour with my brother to go see it, and we went at the first possible show time at like, 10 am. We were excited. One line stuck out to me as peculiar that they uttered twice. “Hideous Fucking C.H.U.D.”

I didn’t know what a C.H.U.D. was, but I liked it, and began saying it a lot. I obviously looked into it eventually, started seeing the references in tons of other pop culture things and swore one day I would watch it. Like. Seven years ago. Thankfully, the 1984 Blog-A-Thon happened, and I finally had an outlet for my dreams.

New York City. Land of the homeless, large sewer systems, subways, and C.H.U.D.s. What is a C.H.U.D.? Good question. It just might stand for Cannibalistic Humanoid Underground Dweller. You’d be hard pressed to find a better acronym than that one.

No one sees them either, as they only come out of the sewers at night and bring their prey with them. However, there has been an unusual number of reported missing people cases lately. And police captain Bosch (Christopher Curry) is being told to cover it up. Don’t assume murder, just regular missing people running away. Well, he doesn’t really want to anymore. The numbers are getting too large and he has personal stake in it. His wife went missing too.

When he begins to investigate, a soup kitchen owner, A.J. ‘The Reverend’ Shepherd (Daniel Stern) has also noted that the homeless population has been dwindling, including several patrons he knew who slept underground. In fact, some of them are very scared, resorting to stealing weapons from police to fend for their lives. The Reverand is also a former nuclear physicist, or something. That should be noted, because that is awesome.

On the other side of the street, we have George Cooper (John Heard), a famous photographer who took pictures of the homeless in the sewers before and needs new material. His model girlfriend (Kim Greist) and him also get caught up in this C.H.U.D. nonsense, and it will take all four of them working together to stop the madness, find the root of the problem, and prevent the town from being blown up.

Oh hey, John Goodman is in here too as an unnamed cop. That seems relevant. 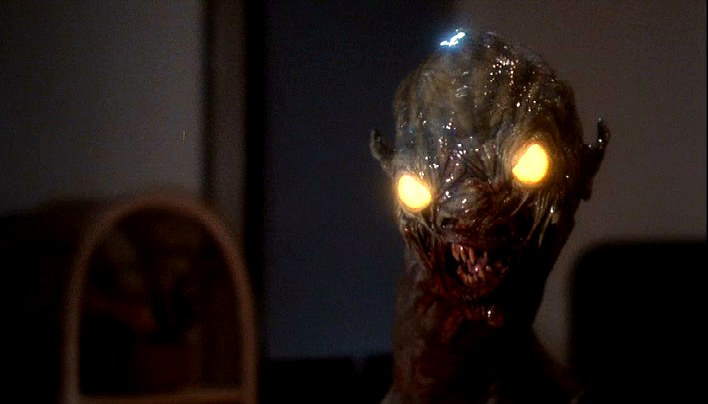 Oh man, B-movies! I almost forgot you existed. After all, in modern times, there really isn’t too many B-movies left.

There is the bullshit that SyFy and The Asylum produce, but I would qualify them as C-Movies. They are intentionally made shitty, and are in fact, too shitty. No passion, no heart, just shit does not necessarily make a good time. Sharknado is terrible. The better B-Movies are the ones that were serious about what they were doing but ended up being shitty and amusing, not realizing that they have become a joke. The fact that C.H.U.D. had script controversy between the two male leads and rewrites means that these people wanted to make a real horror drama film.

But special effects. So bad.

While watching it, I did find myself laughing on more than one occasion. The shittyness of the 80s was fully rampart in this film. But at the same time, it had a decent plot. Corrupt government officials, nuclear waste scares, gray area between right and wrong. It wasn’t badly written. Just the make up.

This may be Daniel Stern’s best role after Home Alone (sorry Bushwhacked/Celtic Pride). Was it worth my time? Arguably. I feel better about using the term C.H.U.D. now, so I got that going for me.

It is currently on Netflix, so if you have a spare afternoon, why not?