Have you heard about Bully? I bet you have. If you haven’t then the plan has failed.

The Weinstein brothers are famous for taking indie or art house pictures in the 90s and bringing them to the mainstream. The next most famous thing they are known for is creating Kevin Smith. The next main thing after that is the saying that the best type of advertisement is the ones you get from free. Make it so the newspapers write articles about your movie, and boom, people know about your movie.

So when it came to dealing with the MPAA over ratings issue, they were probably rolling around in glee at all the free advertisements!

For the three of you who don’t remember, initially the MPAA gave the film a rating of R due to its language, despite it all coming from actual footage of high school and middle school students using/hearing it. After a long battle, the MPAA caved and gave it a PG-13 rating. The film makers really wanted kids and teens to see this movie, to get the anti-bullying message out there. Unfortunately it still only got limited release in theater, and then 11 months later, it is released on DVD/Blu-Ray.

“If this video needs to be seen by everyone, why don’t you put it on the Internet for free?” Because fuck you, money, that’s why. 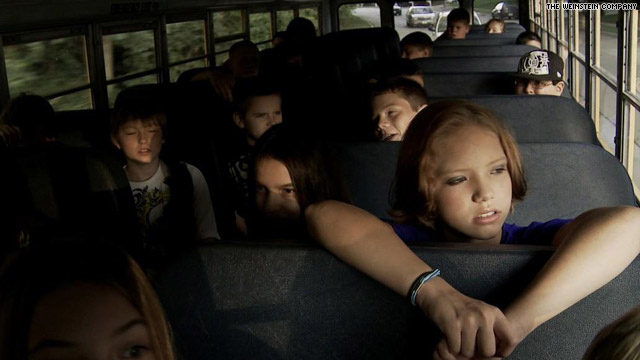 Ah yes, the bus. Danger at ever corner.

What is the documentary about though? Bullying. Oh okay. That makes sense.

It starts with the chronicling of one boys life, who eventually committed suicide from all the stress. It showed the parents grief, their anger towards the school who would seemingly do nothing about the bullying going on right in front of them.

Then it also tells the story of five other individuals. Some are just regular nerdy looking kids. One is a lesbian in a small conservative town. A girl who found a gun just to scare other bullies, and more. Heck, Iowa is represented, woot woot!

For some of the students, a guy with a camera walks around and captures some days in their life, letting you experience it as well.

And that is about it. What? You thought there would be a solution? Nope, this is awareness damn it. This is to make you feel bad. 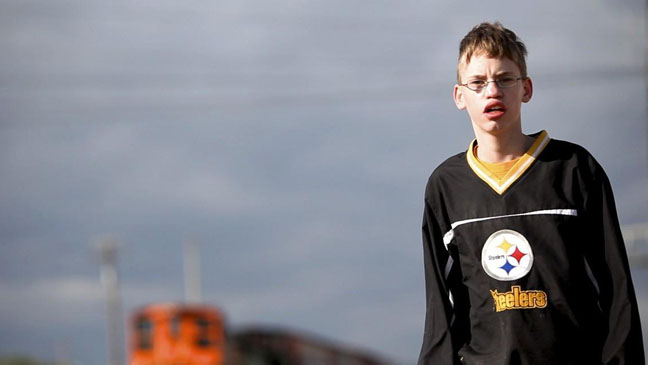 What? This kid wasn’t picked on for his looks, but his poor choice of sports teams.

Like I just said before my bullying joke, this film wants you to feel bad, and that is about it. It has emotional scenes, people crying, people being picked on. If you were bullied, you might get sad from that memories. If you have children, you might get sad for that reason. You will probably get sad for being a human being. But in my eyes, that is all it does. It is to raise awareness that bullying is happening, and the schools aren’t doing much. Yes. But by offering no solutions other than awareness, I don’t see what it is doing at all.

Maybe it hopes bullies will see this and change their way? Maybe. But if that is all it could really hope for, you’d have think they would have done the things mentioned above (Free on the internet, or at least not wait a year to release it for purchase). I am sure the maker of the film probably disagrees with the way it was all gone down, but I can’t really take him away from the issue, since I don’t see him putting up a fight anywhere.

Either way, I think Bully is actually just a sensationalist piece, that tries to hit you in the feels, but offers no useful information. How sketch is this follow a kid around with a camera thing too? There is a principal that by observing something, it changes. These bullyies might have actually bullied harder or worse knowing they were on camera, to get famous that way. Who knows. I just know I can’t trust it.

1 out of 4.
Tags:1 out of 4, Bully, Documentary, Weinstein Brothers