We got a Disneynature film here, and they have been doing this for a few years. The only other movie that they did that I saw was African Cats, and man, did I love it.

So why not Bears? Why not a short movie in Alaska about a year in their life? Yeah, let me get some bears.

This is about a bear named Sky, and her two kids, Scout and Amber. They are new born cubs, and it starts with them in the den waiting for winter to end. We then get to see their journey from the mountains, to the coast, to salmon season, to hibernation. According to the movie, only half of all bear cubs survive the journey in their first years. Well, shit. There are two cubs here. Which one will it be?! The adventurous Scout, or the mama’s bear Amber? 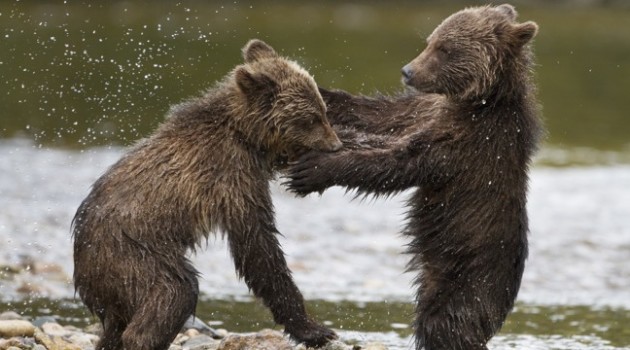 Maybe one will take the other out in a fight well ahead of time.

They have to face avalanches, scarcity of food, big mean adult bears who want to eat them, foxes, raging rivers, and more.

We also get John C. Reilly as the narrator. He does an okay job. I get kind of annoyed, because he decides to “speak” for a lot of the animals, which has him then carrying on a conversation with himself. It is meant for humor, to add to the story and all, but I don’t remember African Cats having that bull crap in it, but still enjoying it.

I do find parts of the film questionable. I really don’t believe the avalanche scene happened as shown. I think some splicing went on there.

I am happy that during the credits, they showed a lot of the behind the scenes filming. So they had someone filming their camera man a lot, meaning it would show them filming, and then right after, what they filmed, to get it all into perspective. That was my biggest question with African Cats: How? And they kind of answer it! Really cool to see what they had to do to try and make this as natural as possible, without interfering. Although, you know, I doubt it worked out. Just by being there, they naturally interfere.

Overall though, this movie had a TON of awesome shots that are really hard to see, with great high definition. Even the salmon were exciting. Watching all of that shit was cool. I am glad they did it.