Turning popular board games into movies is not a new thing, it is just not too common. Hopefully the next one is some disaster film by Michael Bay, involving Hungry Hungry Hippos. But really, why not board game movies? I can only think of one of the top of my head, Clue, and Clue is amazing. So why not Battleship? Sure, it is basically two naval units firing randomly into the abyss to hit the other, because fuck your radar.

Can they turn that into a full fledged naval war movie? Or will they just cop out and throw in some Aliens? 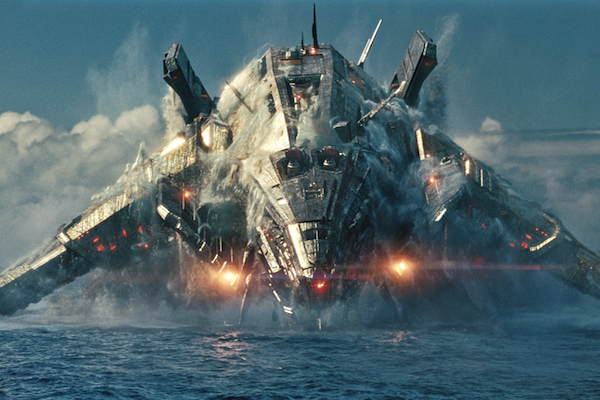 Back in the mid 2000s, NASA has discovered a “Plant-G” with similar situations for life compared to earth. It is just super far away. So they send a giant ass beacon to that planet, hoping for a response. About six years later in 2012, they get one. But first! Alex Hopper (Taylor Kitsch) is a local slacker in Hawaii, and his brother Stone (Alexander Skarsgård) is a Commander in the Navy. He does not approve. Especially when he flirts with the Admiral’s daughter, Sam (Brooklyn Decker).

He does what anyone would do in this situation. He joins the Navy from the pressure, and six years later finds himself as a Lieutenant! Yeah. Even better, he has been dating Sam, and now wants to marry her. Just has to ask the Admiral (Liam Neeson) for his blessing first. This has a lot of nothing to do with Battleships, so lets move on. Woo, navy games with other countries involved in Hawaii! Too bad the Aliens show up and confuse everyone. Four ships, to be exact, land into the ocean, with a fifth one breaking apart and crash landing into Hong Kong. Whoops.

When the ships go close to investigate, a force shield is brought down trapping only three ships in its grasps! One lead by Stone, one with Alex on it, and the other lead by Captain Yugi Nagata (Tadanobu Asano) of Japan. Due to certain circumstances (death), Alex also finds him the new Captain of the ship, and he has to figure out how to bring down the Alien threat, while his girlfriend, a man without legs, and a scientist try and stop the aliens from signaling home. Also, Rihanna is here, doing some stuff. 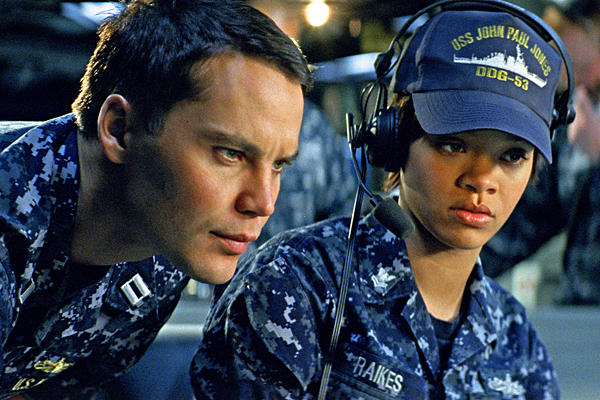 Doin’ some stuff on some computers, gettin’ her pew pew pew on.

So here is something cool. You are probably wondering how randomly firing into the ocean makes this movie eh? Well, turns out the Aliens turn off their Radar, so they kind of have to blind fire. Because it is by Hawaii, there are tsunami warning buoys throughout the ocean. They access that information, to try and determine where the Aliens are currently swimming by the rise in elevation of the tide at that point. Then they fire at the buoys to hit them. Thankfully they have short quick names like, B7, allowing the firing to become quicker and more easier.

Cheesy? Yes. But I like that they incorporated the game in some how.

But that is all I liked. This did basically feel and look like Transformers, if all the Transformers were giant machines that became sea dragons. Dialogue and plot was crap. Epic sea battles didn’t really happen. Mostly ships got destroyed, and one was able to survive and fight back. Slowly. The scenes on the island trying to stop the aliens on foot? Eh, wasn’t a fan of those either.

Basically, it was another mainstream action movie that I found boring. Can’t believe anyone would be surprised at this point!