Bad Moms thankfully came out the week before or during my vacation in the summer. A glorious time where I missed, frankly, a lot of terrible movies.

I am judging Bad Moms not just by its cover, but by the actresses picked, the trailer, and the marketing they went through. I read it was originally going to involve Judd Apatow and star Leslie Mann instead, and that made the previews make a lot more sense. It looks like a movie he would make about this subject, if it was more dramatic and had an additional 45 minutes or so.

But to come out with this film, with the lame title, the same year Dirty Grandpa [Editor’s Note: This made more sense when I said Bad Grandpa, but that was years ago. I am too lazy to change this joke]? As Bad Santa 2? Come on, we all know 2016 sucked, but was it really necessary to make so many bad films? The worst thing a mom can do is drink when her children are 12 years past breastfeeding, don’t cha know.

Amy (Mila Kunis) is a hard working mother. She makes breakfast, she works extra hours at her part time job, she comes home and makes dinner, she volunteers with the PTA, she takes her kids (Oona Laurence, Emjay Anthony) to after school activities and helps with all of their projects. Her husband (David Walton) has a relatively easy job, but it brings in the money. Except he doesn’t help with all of the extra stuff, leaving it all on her.

And then she finds him jerking it to a cam model, live, and he has been doing it for 10 months now. So she wants a break. She kicks him out and goes out drinking. She meets Carla (Kathryn Hahn), another single mom (with a much older kid) and they have a blast. They eventually gain Kiki (Kristen Bell) as well after Amy defies the PTA president (Christina Applegate) in front of the entire PTA. Kiki is even more overstressed and needs to have fun.

So you know, they go and have more fun. They make their kids make breakfast, do their own work and start focusing on themselves more. I know, very bad moms indeed. And when the PTA president gets angry at Amy’s kids for defying her, Amy decides she is going to run against her and promise a whole lot less work. 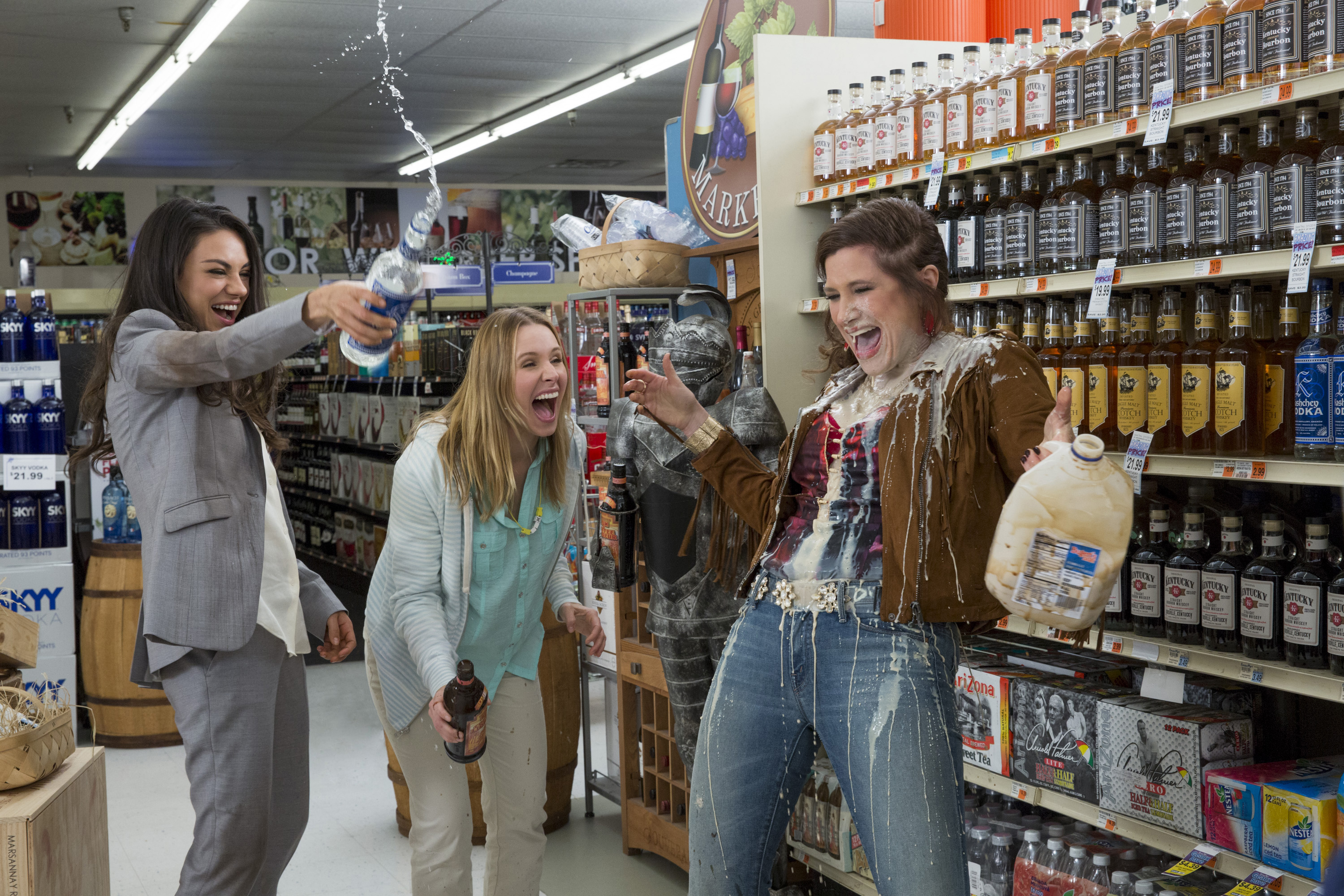 Yes, I am disappointed that I didn’t hate it more, but it had a handful of amusing moments. Sure, Hahn’s character was just terrible. Bell has done better way before. And Kunis never feels believable in this role. Technically the best person in their role might be Applegate as the stuck up, stereotypical, PTA President. Which is a weird place to see her career at the moment.

Bad Moms is full of wish fulfillment, and of course the message that moms matter too, so they should have fun more and let their kids grow up without them always holding their hands. And that dads should be involved. A fine message, but something that feels like it doesn’t need to be said at this point in human history. Maybe 30-40 years ago.

It is jam packed with the latest party tunes, to date this movie further in a few years. There are several party montage scenes, at the bar, at the grocery store, and a much longer one of mostly average looking middle aged women partying like a college party. And that almost seems to be the entire point of the film.

Bad Moms isn’t terrible, it just is far from a great or even a good or okay movie. Better casting and better jokes would have went a long way with this film.