Skip to content
HomeUncategorizedBackstreet Boys: Show ‘Em What You’re Made Of

I don’t care who you are. Where you’re from. What you did. You know the fucking Backstreet Boys.

The biggest boy band technically of all time. Not by number of members, but by album sales. Yeah, bigger than N’Sync, even though some of their members may be more successful now. And some of them branched out into other fields.

Hell, the Backstreet Boys have been making music since their decline from fame. Sometimes as four people, but now back again as the original five. Now they are making their own music, making their own decisions, not being owned and operated by a label. Backstreet Boys: Show ‘Em What You’re Made Of is about their renunion, their past, prepping for a 20th anniversary as a band, and more. They are showing us all they have to give. They are showing us when they were larger than life and when they were an unknown group of kids.

But now, Backstreet’s back. 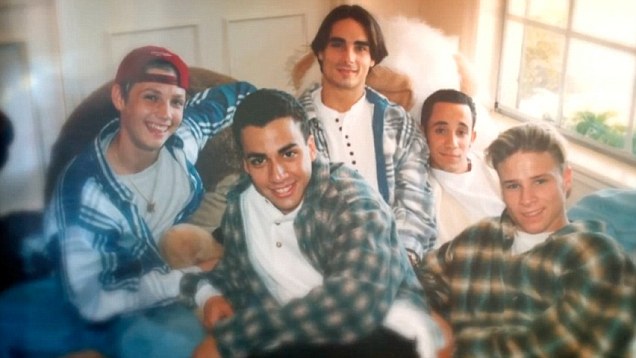 Technically I wasn’t super interested in a Backstreet Boys documentary. It seems strange to come out so late after the fame, but maybe their contracts and stuff wouldn’t allow them to be frank about anything. For most of these recent musician/tour documentaries, they aren’t very different. Mostly happy moments of the artists with fans, filled with concert performances in between behinds the scene footage. Usually a token sad moment or two to make you cry (The Katy Perry one was legit super sad). But they are all marketing by the record companies to increase sales for the movie, for concerts, and for CDs.

Is that what this one is? Sure. Kind of. If people realize they have newer music, they might seek it out. But at the same time, they opened up a level at a level I have never seen before in a concert based documentary. The members speak like real people and argue and multiple F-bombs are thrown around. They also go to all of their home times to tell stories of their lives before the band and see old teachers/friends. Some members have to deal with not being up to par with their younger selves.

They also get to talk openly about their starts in the band, the good and the bad. The bad is public knowledge, sure, thanks to lawsuits and bad contracts, but it seemed refreshing to talk about how shitty their label and managers were, and how manufactured they were early on.

This documentary also doesn’t have a lot of filler of just the band performing songs on their 20th anniversary concert. They have some at the end, during the credits. And sure, we get some very old footage of singing and footage of them making songs for their latest album. But a lot more of this documentary is spent dealing with the five individuals and just them, for the most part. No Aaron Carter.

Comparing this documentary to the other music based ones, I would say this one is better. Yeah. I want it that way. And it was definitely a step up from a VH1 music documentary. I was worried it would feel like Behind The Music, but again, way better.

Fuck N’Sync and fuck Justin Timberlake for leaving them.

4 out of 4.
Tags:4 out of 4, A.J. McLean, Backstreet Boys, Brian Littrell, Documentary, Howie Dorough, Kevin Scott Richardson, Music, Nick Carter, Show 'Em What You're Made Of