You saw the title of this review. You aren’t a complete noob. You know what is going down.

With this, I have reached review number 1650 for my website. Like I have been saying more and more lately, sure, that number isn’t sexy, but a milestone is still sexy to me. My last few Milestone Reviews have had a theme of career ending films for the actors involved. So I figured we needed to take a break from that and switch to babies.

I used to hate babies. They confused me. Then I went and had one of my own. Hell, my baby turned 1 just last week. Literally a week ago from this posting. That is crazy. I understand babies now. And I also understood that Superbabies: Baby Geniuses 2 was considered one of the worst films ever created. Have I seen it? Of course not, why would I watch anything back then starring babies? But now it is basically a film I have to review eventually as a Milestone Review.

BUT IT IS A SEQUEL. A movie has come before it. Baby Geniuses. A whole five years earlier, when it was still the 1990s! The 90’s have a lot of weird and strange movies, reviewing them all would be a terrifying endeavor. But this time, there is an important reason. If I never see Baby Geniuses, then I can never see Superbabies without the proper context! Don’t worry, Superbabies won’t be review #1700. Instead I will just sneak it out sometime in the future. Definitely before review #2000. 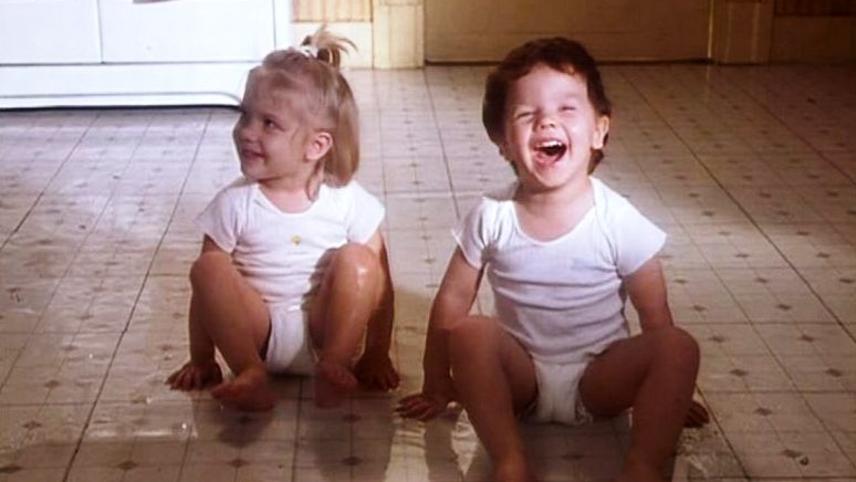 Daww, babies giggling or something. That can be cute.

Babies are inherently smart. That is the main point of this movie. They know a whole lot about the universe. Secrets of the universe. That is all hiding up in their baby heads. And they can communicate with other babies, using their baby talk language. It is just that once they start learning the actual human language they forget everything before then. They call it crossing over. Learning human talk means forgetting everything they knew from baby times and thus becoming non important entities in the world.

If you missed my explanation, don’t worry, a high tech computer explains all of the backstory to Dr. Heep (Christopher Lloyd), despite being a doctor who knows all of this to be true. Heep and Dr. Kinder (Kathleen Turner) just haven’t fully figured out baby speak yet. They know how to teach babies to be incredibly smart, including karate and shit, they just don’t know how to communicate with those little ankle biters. 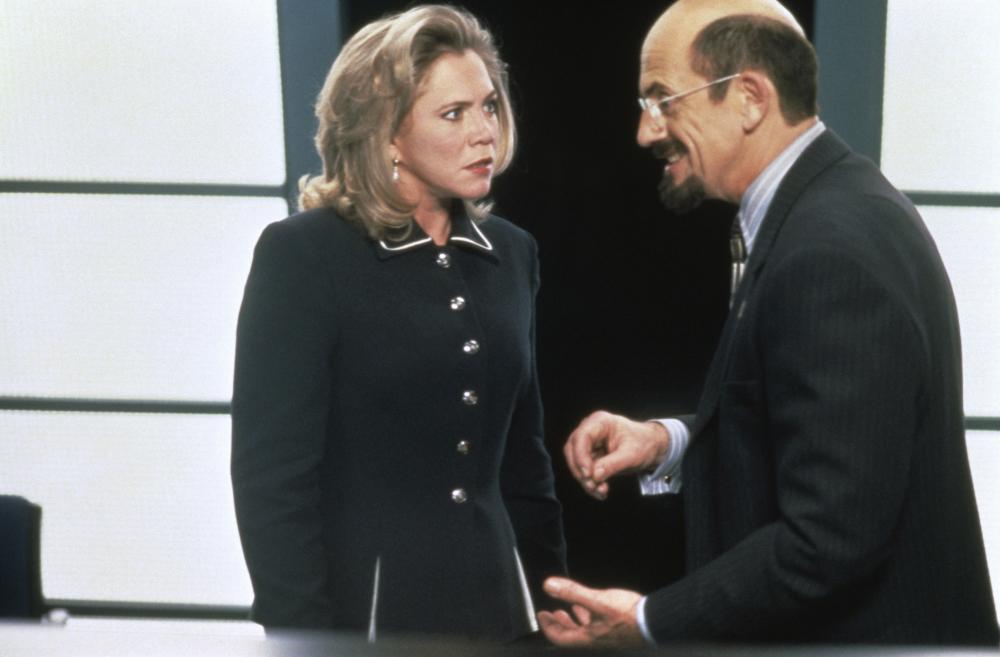 Look at how evil they look! Mwhahaha!

Anyways, their best baby is Sylvester (I don’t want to tag the babies or their voice people) as he has been there the longest. He is almost 2 years old, an excellent fighter (sigh), and constantly trying to escape their laboratories at BabyCo. BabyCo is a company that just makes toys and items for babies, makes sense.

Sylvester (or Sly as they call him) is a twin that they took from an orphanage. The other twin is Whit, but he was adopted by Robin (Kim Cattrall) and Dan (Peter MacNicol). Robin is the niece of Dr. Kinder, and Dan is just really good with babies and writes books or something. 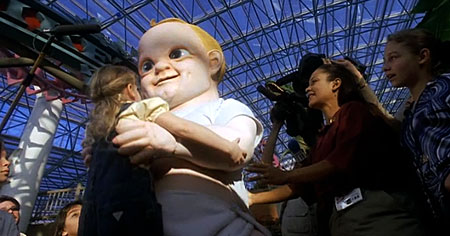 Holy fuck that is a big baby!

Anyways, Sly does another escape attempt, and guess what! It is successful. It involves hiding in a dirty diaper basket, getting thrown away, and getting the crap (heh) out of there. He tries to bring another baby with him, a girl, but she is too scared to go. So, obviously, she goes alone.

And then he heads to a mall. To hide, he switches clothes with a girl baby and goes completely undercover. Yep, he wears drag as the baby calls it. Sly waits until the mall is closed before going out of hiding and he has the mall to himself! Yes!

When you have a mall to yourself, obviously you can now play video games. And change your outfit! So we get an entire baby fashion show, seeing the baby in a tux, a Saturday Night Fever outfit, and more get ups. While dancing and doing random shit.

This picture isn’t good enough. Just watch the scene while it exists on YouTube.

That scene really irks me for probably obvious reasons. Babies can’t dance, just like babies can’t fight and stuff. But since this is just a one camera shot of him dancing a few times, not a lot of quick cuts, they couldn’t fake it well. So they got a tiny good dancing toddler/kid or midget to do all the dancing. Or a large person and made them look small by perspective. But then they OBVIOUSLY just kind of attached a the face of the baby onto the dancer both times. It looks awkward as it is badly done and obviously fake.

Just such poor quality. I mean, at this point in the movie I already knew it was terrible. I just didn’t expect it to get this bad.

Oh hey, did I mention JoyLand? It is a baby themed Theme Park, entirely indoors. Kids can use it too. All of it is free for them, parents have to pay and the money goes to research or charity. Everything is robotic, including that one giant robot baby. There is an entirely robotic petting zoo too, that a child can take a controller for an animal and make them do things. Why? Because apparently no one else has one like it.

Although, it takes away from any reason to really go. People can see fake animals every day, clearly a real petting zoo is a superior thing, but whatever. I am sure the robot stuff won’t come back to harm them. 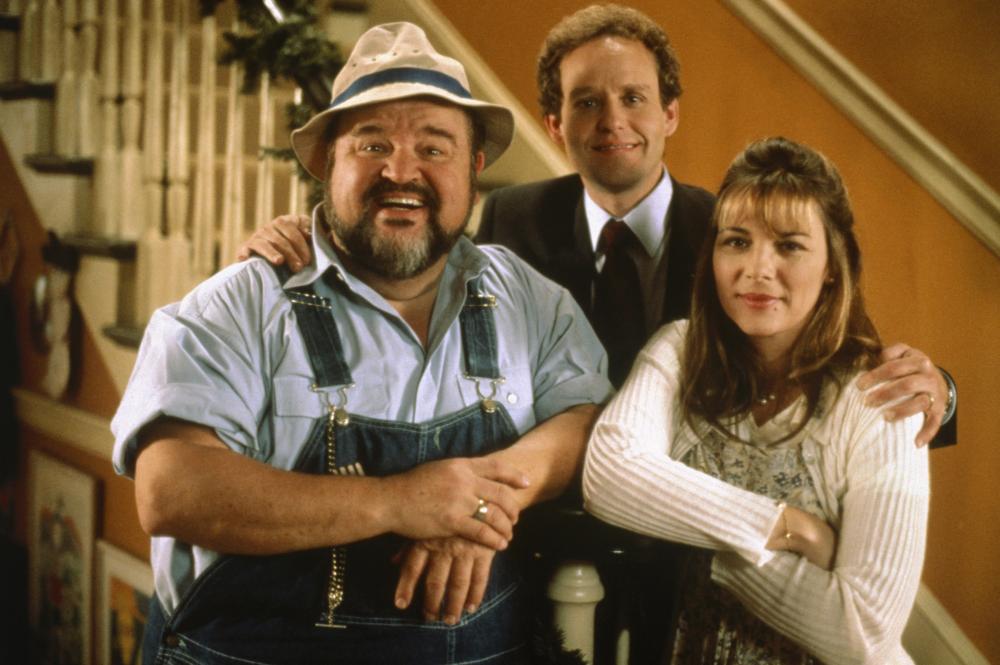 I also have barely talked about these guys. Maybe I will do that now.

Thanks to the most unlikely of circumstances, Sly picks and outfit that Whit owns. And they both happen to be wearing it. Robin decides to take Whit to the mall and they run into each other in one of those big crawl tube places. They freak each other out, go opposite ways. So Robin ends up grabbing Sly and the goons end up grabbing Whit! Oh no!

Sly is stoked, because he escape. He goes back to that house. He finds out that Whit had a sister, a bit younger than him, Carrie. And Carrie knows that Sly is an impostor but doesn’t know what to think. Whit is back at the secret lab, with a bunch of smarter babies, all sad and crying and confused. But no one cares. They don’t care about the crying baby. THEY DON’T CARE ABOUT THE CRYING BABY EVERYONE. 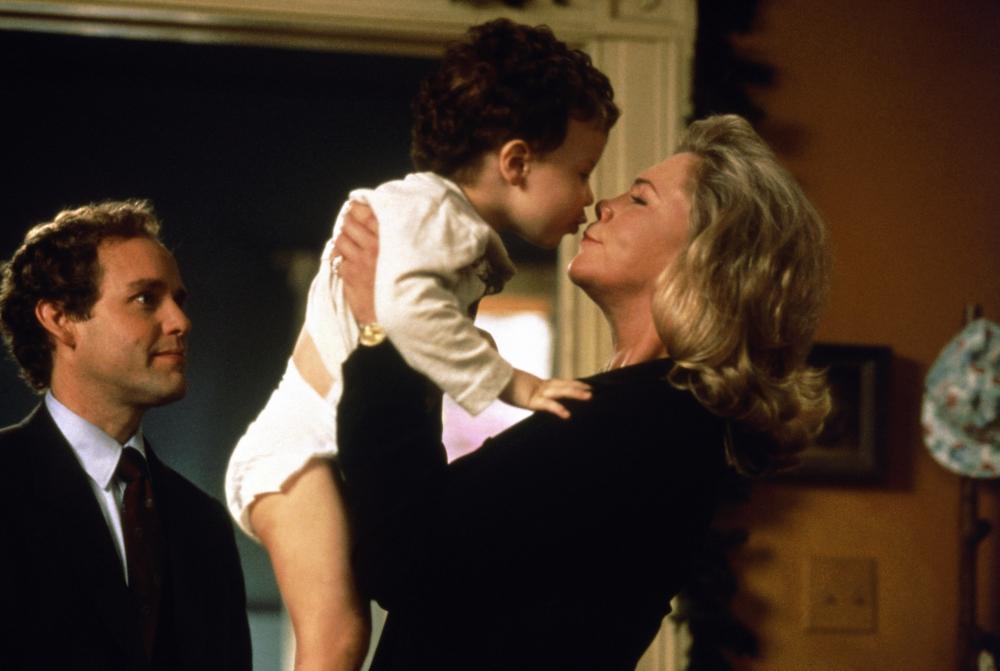 This lady is a big fat phony. She just wants to eat the babies.

Where am I? I barely remember.

Dr. Kinder realizes quickly that the goons grabbed the wrong baby. It is actually that fuckface Whit, her nieces adopted kid. So she figures she will just go running over to her house to grab the correct kid, no problems.

But there are problems. Namely in that Dan through his own research has basically figured out baby talk. He can understand the babble and what it means in actual Human English. That’s fucking crazy. And when his kid tells him to not let him be left with Dr. Kinder, he listens.

There are a fuck ton of other babies in this movie, but none of them really matter.

Anyways, some more dumb stuff happens for awhile. Then all the babies in the research facility are sent to Lichtenstein, because that is where their other lab is. The babies at the house led by Sly decide to break into Joyland/BabyCo to break the other babies out. Or destroy the research. Or something. They do it by hypnotizing Lenny (Dom DeLuise), whom I don’t even know why he is in this movie. Him or Dickie (Kyle Howard).

And of course, the robot animals and robot babies are used to take out all the guards. Some more things happens, Dr. Kinder loses, and the babies Whit and Sly decide to cross over from the baby speak land into Human language land, leaving behind the secrets of the universe and more. Sly gets adopted by Robin and Dan and yay families.

The ending then has like, 3 minutes of montage of the babies doing stuff, like, actual clips from the movie we just saw, with the Randy Travis song The Gift Of Love for some reason. I guess they wanted that emotional impact ending and to fulfill your quota of babies for the next week.

Kyle, what are you even doing? And this isn’t even his worst outfit.

I can readily admit that this is not my best written Milestone Review. It is not even top half most likely. It doesn’t help that within the first 10 minutes of the movie I knew I already hated it, with the rest of the 80 or so minutes not doing a damn thing to change my mind.

So yeah, it became a bit harder to remember all the different aspects of the film. Like random baby names. Like the purpose of Deluse or Howard in the film. Like the plan at the end. Like how Lichtenstein was even involved. My mind tried to completely wipe all knowledge of the film right after viewing it, with only my few notes written down as a guide to actually write this summary.

It doesn’t help that this movie is from the 1990s, was a crap quality, and finding decent pictures of it on google was a major pain.

The biggest problem with this movie is that it is a comedy that doesn’t have any good humor. Oh, they insert a bunch of giggling babies to make you think funny moments are happening, but babies giggle at every random little thing. It is like they made this movie for babies and no one else to find entertaining. But if you know babies, they can watch and be entertained by anything, regardless of how deep the content is.

And honestly, if you are going to have a movie where babies before 2 years are super smart, know all these things and communicate with each other, you shouldn’t still have them sound like babies. That is boring. You know what is funny? Babies sounding like adults. Just look at those ETrade Baby commercials, talking about adult things with a grown up voice.

This movie is not and once I hit Publish, I will forget about this one too. Let’s assume I need no previous knowledge to understand Superbabies: Baby Geniuses 2.